Mere “Normalization” of Interest Rates Would Nuke The Economy

“People of privilege will always risk their complete destruction rather than surrender any material part of their advantage.”

When price inflation sets in, more workers find it hard to do more than buy gas, pay their rent or mortgage, keep up with credit card debt and medical bills. According to a poll out this morning on CNBC, 1 in 5 working Americans already run out of money between paychecks.

“The economic consequences of this are huge,” our Jim Rickards comments on the report. “If you buy coffee at the grocery store instead of going to Starbucks or go jogging instead of paying a visit to the gym, then service and retail industries all around the country start to suffer.”

Decreased spending habits “can be followed by layoffs at some of those outlets and even more cuts in discretionary spending as the laid off workers tighten their belts.” We don’t need an inverted yield curve to tell us the knock on effect on the economy is a recession.

What’s a Fed monetary mandarin to do? In our session this week with Christopher Leonard, author of The Lords of Easy Money we ask that very question. Can the Fed afford to raise rates to “curb” inflation?

We began the conversation with this chart: 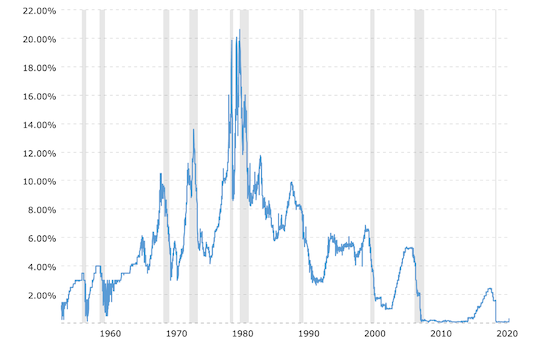 You can quickly see the Fed’s weapon of choice in fighting economic mayhem is to drop the Fed funds rate. Each gray line represents a recession – The stock market Panic of 1987, The Tech Wreck of 2000, The Global Financial Crisis in 2008 and the government inspired economic lockdown of 2020 all led to extended periods of lower rates than the market would dictate… most recently – since 2008 – 0 to negative real rates.

The conundrum for monetary policy enthusiasts is simply put: leave rates too low for too long and you get massive misallocations of capital and supply chain disruptions because the cost of producing goods is not accurately aligned with the demand. You make too much stuff, it sits around in shipping containers and warehouses waiting for demand to catch up.

Throw in a pandemic, you get disruptions of an epic proportion… and price inflation at or approaching historic highs: 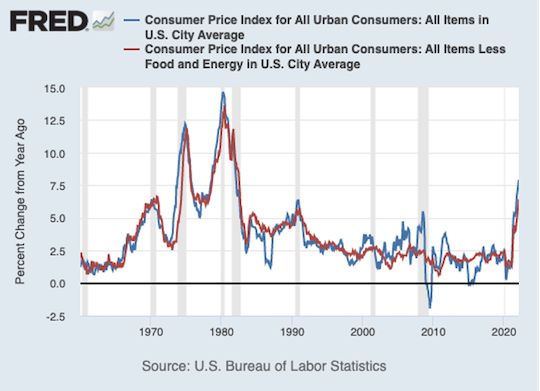 As our guest points out, the current trajectory of price inflation looks eerily similar to the spike immediately following the breakdown of the Bretton Woods exchange rate system in 1971. And again nine years later when Paul Volker was hailed as the great champion over runaway inflation of the time.

“Today’s genius economists,” friend and fellow gloom-and-doomer Marc Faber writes in the April 2022 edition of his excellent Gloom Boom and Doom report,” tend to belittle Arthur Burns, who was Fed chair from 1970 to 1978,” making him Volker’s predecessor. “But to be fair to him, Burns increased the fed fund rate to 8% during his tenure. I seriously doubt today’s uneducated Fed members will be able to achieve even an increase to 3%.”

That begs the question, as Faber puts it, can “the Fed possibly increase interest rates sufficiently to curb inflation without endangering the entire financial system?” The answer Marc Faber gives is a resounding “no.”

During our discussion with Christopher Leonard on the current Federal Reserve, the so-called “Powell Fed,” we talked about not just their impotence in the face of drastically rising consumer prices, but their inability to even sell the idea of bringing rates back to historically “normal” levels.

“The most critical element of the Powell Fed,” Christopher says, “is that Jay Powell, when he became Chairman of the Federal Reserve, inherited a project from his predecessor, Janet Yellen, and in a way, her predecessor Ben Bernanke.” That is, he inherited the process of trying to quote, “normalize monetary policy”, after years of using low rates as a monetary elixir to save the banking system and then to prop up financial markets.

“The Fed in 2008, 2010, pushed down this very experimental path of keeping interest rates at zero,” says Leonard, “and then critically doing quantitative easing, which is just pumping trillions of dollars into the banking system.” Leonard continues:

The entire time this is happening, it’s acknowledged within the Fed, within the top policy committee, the FOMC, that we can’t keep doing this forever. We’re creating imbalances and distortions in the market. And so we have got to start raising interest rates above zero to a historically normal rate of even three or four percent. While at the same time, we need to start withdrawing some of this high powered money from the Wall Street banking system.

When Jay Powell walked onto the job in 2018 and inherited the process of trying to make things normal again, trying to raise interest rates to a level that’s not just normal but even low by historical standards. He’s trying to get rates back up to three percent and at the same time, trying to withdraw some of this cash from Wall Street, put in through quantitative easing.

That was one of the most fascinating episodes in history, looking at what happened when the Fed really tried to normalize, so to speak, in a concentrated way in 2018, it caused the markets to short circuit and fall.

The Fed hasn’t built sprawling infrastructure like the Social Security Administration, we summarize Mr. Leonard, but they have, particularly over the last decade, only expanded its footprint.

“In other words,” says Chris, “back in 2008, it was an emergency procedure when the Federal Reserve went out and bought mortgage bonds for the first time in the heat of the crisis in ’08. The Fed buys mortgage bonds directly. That was kind of crazy. They had to actually hire an outside bank to do it for the Fed. But then that became incorporated into standard function. And now the Fed, since COVID, it’s been buying $120 billion worth of assets a month, including 40 billion of mortgage bonds.”

Even slowing the asset purchase program, let alone reducing it, has caused apoplectic fits (stress) in the financial system; a system which has lived off the grift of Fed policy for years….long before consumer prices began to get the attention of the 20% of paycheck-to-paycheck workers we began this missive with.

Unfortunately, for all, there’s more apoplexy on the way.

If you haven’t already, it’s worth following Chris Leonard on our short journey behind the curtains of the Powell Fed, right here: The Lords of Easy Money: How The Federal Reserve Broke the American Economy .

P.S. Inflation rearing its ugly head is a problem of the Fed’s statistical models and academic theories gone awry in the financial, banking and consumer markets… tomorrow we’ll begin taking a look at how a matching, if not staggering, level of hubris has gotten us into a hot mess on the world stage, too.