Metaverse and the Social Contract

“When citizens would rather serve with their money than with their persons, the State is not far from its fall.”

We spent our week building up our conversation with Alec Ross, best-selling author of The Industries of the Future and The Raging 2020s, which went on sale in September. You’ll notice the Raging ‘20s is a play on the Roaring ‘20s. But rather than the Charleston-dancing flappers of the 1920s, we have BLM protestors and a haphazard assault on the U.S. Capitol.

Ross is a Board Partner at Amplo, a global venture capital firm, and sits on the board of directors for companies in the fields of technology, finance, education, human capital and cybersecurity. In addition, he once served as the convenor for technology and media policy on Barack Obama’s 2008 presidential campaign and as Senior Advisor for Innovation to Secretary of State Hillary Clinton.

I was engaged by our session. Here’s a look at our lead-up to today’s conversation.

A lot has changed since we created the Financial Reserve — internally, in the markets and in the world in general. We have to accept that ever-evolving legal, economic and financial constraints tie our hands in various ways… but we still do our absolute best to honor our agreements within those confines. Interestingly enough, this inexorable evolution in the public and private spheres was a major theme in this week’s Session with Alec.

In recent remarks, Vladimir Putin wastes no time in explaining that the global shake-up occurred when the Soviet Union dissolved. He then chides “those who felt like the winners after the Cold War” for squandering the opportunity to stay out of other countries’ business. He goes on to discuss the culture wars going on in Western nations. “The advocates of so-called ‘social progress’ believe they are introducing humanity to some kind of a new and better consciousness,” he says. As far as Putin is concerned, “they have a right to do this, we are keeping out of this.” But the Russian leader did offer some words of caution…

My Tennis Buddy Indicator (TBI) has a new obsession… the global minimum tax (GMT) proposal that could be ratified at this weekend’s G20 Summit in Rome. The very idea of establishing a global tax — minimum or not — sounds a lot like the first step in establishing a single world government. It brings to mind Jim Rickards’ warning of the coming “Great Reset” as part of the Davos Agenda. You’re probably aware of how large multinational companies use various accounting tricks to claim revenues and profits were made in other countries, looking to take advantage of lower tax rates. The GMT will do away with all that.

Today President Biden trotted out an even slimmer version of the strangely alliterative and meaningless Build Back Better bill. The revised price tag for the proposed social and environmental policies it contains is $1.7 trillion… down from the $3.5 trillion the politicos wanted to spend. Only in our MMT world does a $1.7 trillion spending bill get promoted as a compromise, a bargain. Large corporations, meanwhile, will be forced to pay at least 15% on their profits. And, of course, the bill will instate the 15% GMT. The stated idea is to get the richest Americans to pay their “fair share.” How charging them more than everyone else counts as “fair” is left unsaid. It still seems more like a way to punish people and companies for the sin of being successful. Or just allowing people to vote their way into the public purse.

The Metaverse Will Be Made in America

“The metaverse isn’t some virtual reality playground with stupid-looking avatars,” says Matt Insley, urging our team not to procrastinate on this story. “It’s the convergence of technology that takes our real lives into a digital universe.” In other words, it’s “much bigger than creating an avatar and hanging out in a fake boardroom with your friends.” If our analysts’ early findings are right, it could completely change how we live and work. The metaverse purports to change the way we interact with one another… which brings to mind my talk with Alec and his thoughts on the social contract. 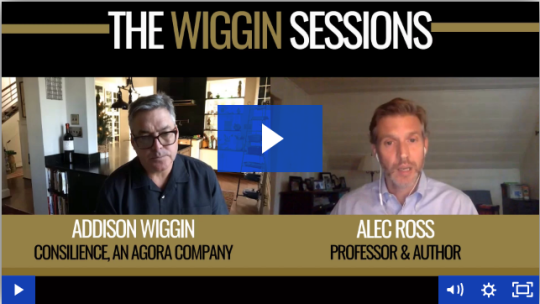 You can catch our full interview with Alec Ross, right here.

It’s a pretty wide-ranging conversation, including some thoughts on the best ways to profit from what Alec sees ahead. Just click on the picture above to watch the whole thing.

P.S. Next week, we dive into the new energy crisis caused by what many see as bogus climate change policies. The crisis is already underway but unsuspected by everyday Americans. Along the way, we’ll strive to understand carbon credits. And we’ll be hearing from Marin Katusa on how you can trade in them.

We’ll also be speaking with entrepreneur Mark Moss, who is also the marquee at Market Disruptors Live 2021…

The event will be here before you know it — November 12-14th in Miami, FL!

Over a dozen of the world’s best investing and trend experts will be there. It could be the investing event of the year. Seating is extremely limited. And will sell out in the near future.