“The thing about Tolkien, about The Lord of the Rings, is that it’s perfect. It’s this whole world, this whole process of immersion.”

— Jo Walton, even before Bezos got involved

It’s not enough for Jeff Bezos to launch his grandiose, oddly phallic rocket ship into space… now he owns J.R.R. Tolkein, too.

Bezos chimed in on his company’s Lord of the Rings prequel airing this evening on Amazon Prime Video.

“Middle-earth is such a beloved world,” the billionaire said to Insider Magazine. “Telling the story of the forging of the Rings of Power is a privilege and a responsibility. I hope we do Tolkien’s work justice. It goes beyond making a commercially successful show. Everyone working on the show read these stories as kids and our hearts are in it.”

“Thanks for printing my correspondence to you a couple of days ago. I appreciate the references in your article,” writes Tony F again. “Just two more points before I put this issue to rest.” Shoot:

One… Matthew Piepenburg says, “At this point, it’s about preservation, not gain.” I’ve been holding several gold securities in my portfolio now for a good number of years, and recently, with all this ‘Buy-Gold’ hype, I invested even more. Altogether, presently, I’m holding losses in my gold securities. Frankly, I’m not looking to preserve losses; I’m looking to make gains! ”

And, secondly, if gold is supposed to be so precious (as it was at one time), why is everyone and their mother selling it? Ha? All this gold hype sounds like hog-wash to me.

If you are buying mining companies – securities and the like – like I think your email reads, you are not buying gold. Mining companies are a speculative play. In that way, they are more likely to lose you money right now because of the overall volatility in the markets… In general, everybody has been hurting after Powell’s J-Hole speech, as seen below. 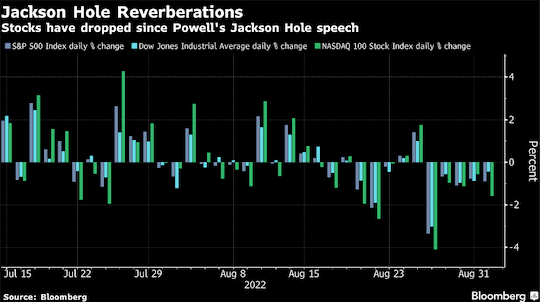 “From the perspective of risk assets, there’s the case to be made that good news will be bad news, according to Chris Zaccarelli of Independent Advisor Alliance.” – Katie Greifield, Bloomberg Anchor

Buying from a place like Matterhorn Asset Management – for whom Piepenburg pitches – or Hard Assets Alliance (HAA), on the other hand… You are holding the metal itself.

I keep my family’s stash in a vault in Salt Lake City, Utah through HAA. We’ve set up a drip system for each of the kids to relay a steady $25-$50 into the account every month. HAA makes the plays for us, buying up when they think it’s the right time. Each of the three kids has a small stash of gold and silver hidden under the desert. (You can check out HAA’s MetalStream™ program by clicking here.)

Buying the bullion itself and storing it somewhere is a completely separate investment strategy than buying gold mining securities. Those market plays might actually be hogwash, like you say, Tony.

The play right now might be to keep your cards close to your chest, and exercise caution, because until the hand wringing over the Fed’s next interest rate hike fades into the rearview, most of what you’ll be doing is speculating anyway.

P.S. If Euro-parity with the U.S. dollar is not shocking enough, how about this nugget from Bloomberg today:

“The prospect of the British pound hitting parity versus the dollar is becoming ever less outlandish. The looming threat of a British recession, acute dependence on foreign capital, soaring debt costs and the rising likelihood the Bank of England’s independence will be circumscribed are bad news for UK assets, and leave bonds and the currency in an increasingly precarious position.”

Any self-respecting American who’s traveled in and out of England over the past two decades… and had to bare the stiff upper lip of border control… will guffaw at this small news item.