No. 4: What Is Tokenized Time?

“Be selective with whom you spend your time; wasted time is worse than wasted money.”

― Lao Tzu, not the guy who wrote The Art of War

Here’s my most favorite idea from the year.

Time is truly valuable. In fact, George Gilder calls money “tokenized time.” That idea forms the foundation of his upcoming book, Life After Capitalism. But what the hell does it mean?

Before we get into it, I should mention that George has a long history of seeing the economy for what it really is. The first bestseller that he wrote, Wealth And Poverty, helped make him one of Ronald Reagan’s most quoted authors.

Early on, George recognized how semiconductors and microchips would revolutionize the world. In the 1990s, he coined the term “Metcalfe’s Law” — which described how a network’s expansion makes it exponentially more valuable. Today it can be applied to the profit potential of cryptocurrencies.

In a related vein, Mr. Gilder thinks wealth can be measured by how long it takes someone to earn the things they need to live. He calls it time-prices, and “it continues to advance at a tremendous pace and despite the complete comedy, tragic comedy of global governments today.”

His theory helps explain why Wall Street isn’t bothered by the government’s money-printing spree… and why gold is still trading sideways despite all of the factors in its favor. 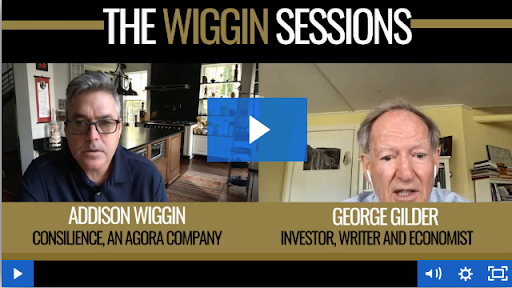 You can catch our full interview with George Gilder from July 24, 2021, right here.

It’s truly a revolutionary idea… and one I expect to return to in the New Year. Learn all about it by clicking the photo above.