“Sleeping next to a woman presents a greater radioactive risk than camping beside a nuclear power station.”

During the pandemic, Tom Cruise went viral berating his staff, crew and anyone who’d listen nearby, that they’d better wear their masks – according to protocol – because he was “trying to save a dying industry”.

Do you remember that? Well, it paid off, it seems.

Top Gun’s “Maverick” earned the Memorial Day box office opening record of $156 million last weekend. It ain’t the $170 million they spent making the film, but in one weekend… there’s a chance the production will be profitable.

But, seriously, who cares about money anymore? Not the Fed… ha, ha, ha!

Spoiler alert! The Top Gunners are sent on a secret mission against a rogue nation to destroy a new uranium refinery.

It just so happens that we’re going nuclear and talking uranium in this week’s Wiggin Sessions.

With higher fuel prices at the pump and reports of summer black outs, Nuclear power is back in vogue.

The demand for electricity is everywhere but its supply is decreasing.

The automobile industry is transitioning to electric vehicles. But, where’s the juice? Where does it come from?

“Between 2009 and 2019,” writes Robert Rapier in a recent Forbes article, “global consumption of renewable energy grew at an annual average of 13.4%. Over that time, renewable energy consumption grew from 8.2 exajoules (EJ) globally to 28.8 EJ. Yet, global carbon dioxide emissions rose by more than 4 billion metric tons per year during that time, reaching an all-time high in 2019.”

“Renewables are growing at a much faster rate,” Rapier contends, “but it will take decades at the current growth rates before renewables can make a serious dent in global carbon dioxide emissions.”

This is why nuclear power is becoming a bigger part of the energy conversation. It meets consumers’ demands for more energy and it meets the green goals of zero carbon emissions.

As soon as you say it: Three Mile Island, Chernobyl, and Fukushima quickly come to mind. Nukes have a rap sheet all their own.

Justin Huhn, my guest this week on Wiggin Sessions, remembers Fukushima vividly. We’ll get to that in a moment.

You may recall my recent interview with Jimmy Soni in his book, The Founders, where he tells the story of the creation of PayPal by Peter Thiel, Elon Musk, Max Levchin and others.

Essentially, PayPal’s internet banking led to Internet 2.0 and created a plethora of tech billionaires over a 20 year period. So Soni asked the PayPal visionaries what they saw as the next big tech innovation on their horizon and they responded without hesitation… nuclear energy.

So as green energy forges ahead and lithium batteries for EVs are in short supply, I invited my good friend Justin Huhn to sit in on the Wiggin Sessions to discuss uranium and nuclear energy.

Justin is the founder and editor Uranium Insider Pro, the leading authority in Uranium market news, analysis, and identifying the best companies in the space.

When I asked Justin how he developed his interest in uranium and nuclear energy, he responded, 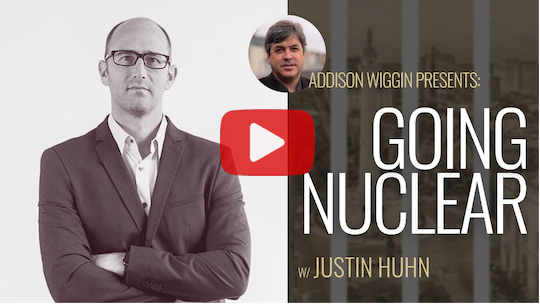 “I was farming at the time of Fukushima.” said Justin, “I was hanging out with a couple of my friends, and the news came out about the Fukushima meltdown, and I was terrified.” Honestly, I was very scared about it. The news was extremely alarmist and I realized at the time was like, oh, that just happened. That’s terrible.

“There’s 400 more of these around the world? Damn. I can’t believe that. So, I had some fear around it, but pretty quickly I realized, oh, nobody actually died from the Fukushima situation. Nuclear is the safest form of energy ever conceived if you based deaths per kilowatt hour. I realized that it had been misaligned in terms of sentiment.”

And so it was… creating an investment opportunity.

P.S. As the editor of Uranium Insider Pro, Justin Huhn covers all the “macro factors” that impact uranium prices. He also maintains a list of 10 uranium equities that he believes offer the best risk/reward. In fact, since he started the list two years ago, the stocks he’s tracking have generated a +335.9% return – versus a 27.4% increase in the price of uranium in the same time.