O, What A Relief Rally

“Buy the rumor, sell the news.”

— A traders adage, that in today’s case, was almost true.

At 2:30pm EST, Jerome Powell said “inflation is much too high” and announced the Powell Fed is “moving expeditiously to bring it back down.”

The Dow dropped nearly three hundred points upon hearing the breaking news after trending up all day. It looked like a classic “buy the rumor, sell the news” moment.

At 2:40, after a short abeyance in the sell-off… Buffet’s “buy-the-dip crowd” moved in. As of this writing, all 300 hundred points lost were recovered in ten minutes, plus another 300 tacked on for good measure.

If this trend holds, we’ll be surprised. But that’s what the charts are saying, for now.

Some investors are speculating a bull run could rally the stock market in the coming months, led by tech.

The FAANGs rallied from their weekly slump with Google parent, Alphabet, and Apple each gaining about 2%. Chip maker AMD skipped up 6%.

But with today’s relief rally, we’d do well to remember, macro is at play. It’s bigger than the markets. Inflation is a beast we haven’t tamed.

Christopher Leonard, author of “The Lords of Easy Money”, said in his Wiggin Session: the Fed is running “a truly unprecedented experiment.”

Take that in for a second. A trillion dollars. That’s inconceivable enough.

But it gets worse. Leonard, again: “Following the financial crisis in 2008, the Fed’s balance sheet grew by $3.5 trillion by 2014. The Fed printed over 300 years worth of money in about four and a half years. Couple that with holding short term interest rates at zero for about seven years…” A spectacle of excrement waiting to happen, swept under the rug for another day. (Click here to watch Christopher Leonard’s full rundown of the Fed on YouTube.)

Throw in the “stimmie-gimmies” from the Pandemic and another round of zero interest rates and you’ve got inflation to the moon. We knew it was possible, but refused to acknowledge its reality. The former head of the New York Fed said out loud he thought they’d waited too long to tackle the Beast.

At least for today, the market doesn’t agree.

Matt Piepenburg of Matterhorn Asset Management, this week’s TWS guest, is aware of this father-son relationship the Fed plays in today’s economic climate: 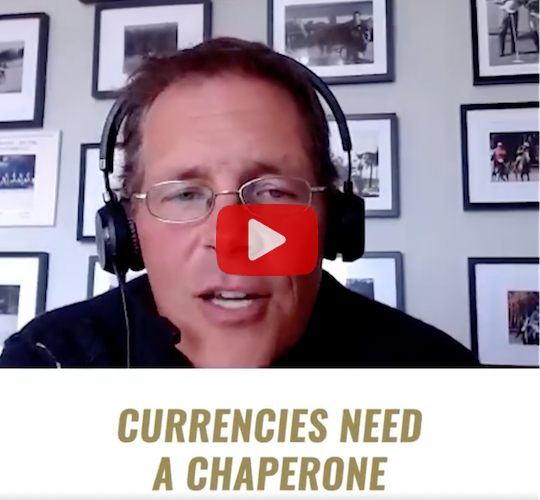 Piepenberg: The American Dollar is “drunk at the party.”

That doesn’t mean we like it. Our job is to probe, question, cajole and forecast. Not to report.

According to Piepenberg, because of all this uncertainty floating around, looking forward we ought to “think preservation, not gain. Risk management is everything.” Buckle up…

P.S. Here’s another currency in need of a chaperone. Take a look at this chart: 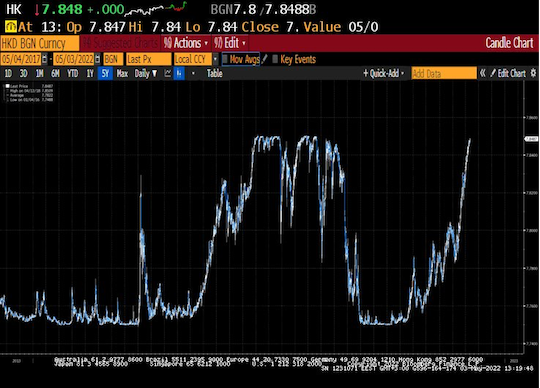 We saw this tweet about the HKD last night: “#HongKong: Is anyone paying attention? The #HKD peg is being tested.”

Our buddy Sean Ring of the Rude Awakening has been training traders for big banks in Hong Kong and Singapore for years. When we asked about the Hong Kong dollar peg, he wrote back by email:

“Hong Kong, the greatest bastion of capitalism that perhaps ever existed, is lost.

“They don’t like Biden; they think he’s a bumbling idiot like the rest of us do. HK likes anything that has to do with colonial Britain or pre-2000’s US, both of whom guaranteed HK’s safety from a Cultural Revolution-starved China.

“Those days are over. Will the peg go? Sure, one day. But not today, tomorrow, or any predictable moment.

“It’ll go when the CCP feels it doesn’t need USD anymore. I have no idea when that day will come.”