On Rising Sea Level and Misinformation

Global warming, or climate change as it has been rebranded, is about as polarizing a wedge issue as you can find on the political landscape. It’s ripe for misinformation. And disinformation.

To President Biden’s chagrin and his effort to create a Disinformation Governance Board there is a difference between “misinformation” and “disinformation,”

“Simply put,” writes Isaac Saul in a Persuasion, “misinformation is ‘incorrect or misleading information’. This is slightly different from “disinformation,”which is ‘false information deliberately and often covertly spread (by the planting of rumors) in order to influence public opinion or obscure the truth.’ The notable difference is that disinformation is always deliberate.”

We’ve covered Trump getting deplatformed ad nauseam. We’ve been following Elon Musk’s comments about “free speech” and his now aborted attempt to acquire Twitter and take it private. We’ve joked with Jeffrey Tucker in our Wiggin Session discussing the Deep State would be enough to get us kicked off social media.

Why bring all this up? This week’s guest is John Englander, an oceanographer, a Reserve member and long-time friend. I first met him on the property tour I led to Rancho Santana in Nicaragua in 2006. He then joined us in Vancouver for our conference every year after. We discovered we have a lot more in common than we suspected.

John began getting concerned about rising sea levels from his background as an oceanographer. He discovered very quickly that his interest in sea level change gets conflated with the climate change political narrative.

In fact, he approaches his science much in the same way Jim Rickards approaches the global monetary system. Or we would when talking about the debt cycles.

“We all know there are ice ages, correct?” John asks. To which, I would agree knowing full well my knowledge only comes from books. “The earth warms and it cools. It should be in a cooling trend right now. But it’s not, we’re still warming.”

John set up a consulting firm to help businesses, municipalities and individuals how to protect their investments if the warming trend continues and sea level continues to rise. He’s far more articulate on the subject than I am. You can listen in here: 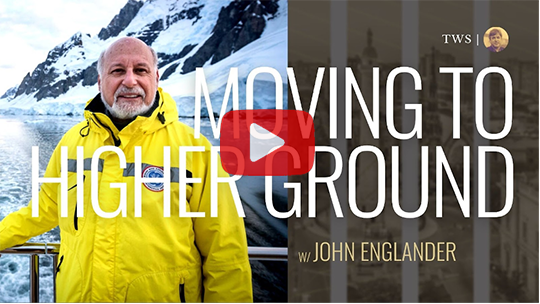 John Englander on a fact-finding mission to Greenland,
we’ll be going there on August 8.

“Imagine your job is to put out fires (misinformation),” Isaac Saul proposes in his Persuasion, “in an area where arsonists (people spreading misinformation) are always setting fires. It takes many firefighters to contain the blaze once it is burning, and if there is a lot of dry brush and kindling, the fire spreads quickly.”

Saul then suggests ways to move forward in dealing with misinformation “You have three options:

“Right now, we do a lot of #1,” Saul concludes “We do a little bit of #2. We do almost none of #3, which is probably the most important and the most difficult.”

John Englander leads missions to Greenland and Antarctic to attempt do number #3; so we can learn the science and see the evidence with our own eyes.

P.S. We leave for Greenland on August 8th. There are several other notable writers on the trip going for the same reasons.

For the record, I’ve never once heard John Englander carp about fossil fuels. “I”m a free market guy like you, Addison,” he’s said to me on more than one occasion.