Our Glass Half Empty

Our missives often look at the glass half empty. So when our guest this week, Gale Pooley, suggests the glass may actually be half full and getting fuller, well, readers have reacted, fairly evenly.

“Holy Smokes!” writes one, Daniel H., “I am not sure which is worse: listening to a Biden speech or reading your brief essay ‘Out with the Old’. Reading that fragmented diatribe was torture.” From the looks of his signature which reads in part “for a Cleaner, Safer, more Reliable World,” you’d think Daniel would like a good fragmented Biden speech.

On the other hand, we received this from Wayne O: “Generally, my mailbox is full of stuff, given that I made the mistake of subscribing to a few financial newsletters. But, I read yours and found real substance. It is intelligent, informative and brings perspectives new to me. Keep it up.”

It couldn’t be a better time to introduce a contrarian voice to all the gloom and doom pervading the mainstream media right now. When the mainstream goes low, we apparently go high.

Despite turbulent markets and historic inflation, Gale Pooley makes the case the earth is actually “superabundant” with resources. It’s just a matter of innovating to be able to “rearrange the atoms” to create technologies of lasting value. We’ll leave the argument to him, you can watch, listen or read the transcript, here.

That said, in keeping up with our tradition of seeing the glass half empty, we took a gander through our market notes for the week. What a mess.

We hope you’ll receive these three categorical observations in the decorous light in which we intend:

First, you can’t avoid the Fed’s September minutes. Despite raising rates at the fastest pace in its checkered history, the Fed is sticking to its guns. 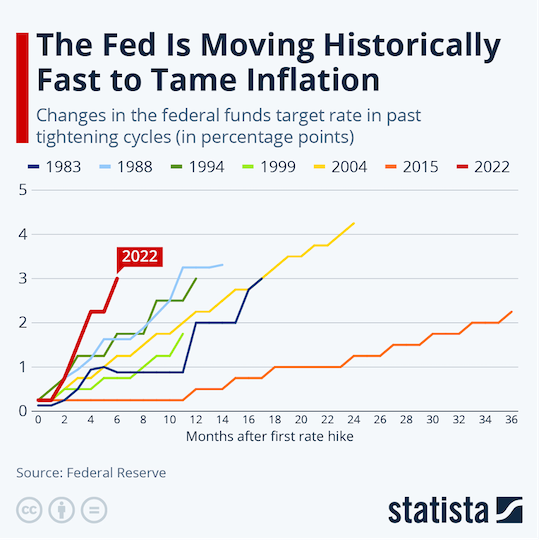 “On page 10 of the Fed meeting minutes,” our friend Sean Ring observes in the Rude Awakening,

“The cost of taking action too little, too late,” Sean disagrees, “has put the Fed in the unenviable position of feeling like it has to do too much.”

The Fed’s “target” inflation rate has outspokenly been “2%”… an arbitrary target set by the Nobel Prize-winning Ben Bernanke (sic) when he was the Fed Chair.

There’s not a lot of ink spilt in the minutes on their multi-year low to negative interest rate policy… nor their “quantitative easing” campaign to buy up treasuries and/or troublesome stocks… nor there heretofore claim that inflation was a “transitory” result of lockdowns during the pandemic and checks made directly to citizens from the US Treasury.

Alas, the minutes reveal we can expect another rate hike of .75 at the next Fed confab in November.

And… continued anxiety on Wall Street throughout the end of the year.

And… that’s not even factoring in the shenanigans which will result from the early November midterm elections. (We forecast that regardless who wins the House or the Senate, mayhem in the streets will ensue.)

Second, global trade is getting shut down all over the place for (lame) political reasons.

From the headlines this week:

** OPEC voted to cut production by 900,000 barrels per day, which promises to restore rising gas prices before the midterms.

** The Biden administration issued new restrictions on sending computer chips to China, which promises to continue to punish the tech sector in the market. From Bloomberg:

The US’ sweeping new curbs on tech exports to China may wreck the latter’s efforts to develop wide swathes of its economy—a sign the two nations are officially at “economic war.”

** In response to Russia’s escalation of the war in Ukraine by targeting civilians, again, aluminum exports have been added to the list of economic sanctions against the wiley old bear.

We know, these trade restrictions are a lot to process, but it’s worth pointing out one of the side effects and causes for the prolongation of the Great Depression in the 1930s was the Smoot-Hawley Act which, in effect, restricted global trade of all kinds by increasing tariffs.

Third, gold – a measure of discord in the markets – is making some long awaited rumblings.

Our friend and Wiggin Sessions alum, James West listed this morning 5 reasons why gold has outperformed broad markets all year and will continue to so.

Since 2010, annual total mine for the production of the midas metal has remained more or less constant between 2,200 and 3,500 tons per annum.

“Ultimately,” Jim Rickards advised during the Paradigm Shift conference in Las Vegas this past Tuesday, “The shrewd gold investor takes the long view. That’s how patient investors preserve wealth in the gold market. For those who flit in and out and occasionally buy rallies and sell dips in panic mode, all I can say is good luck. My advice to investors, when you invest in gold, think about the quantity of gold by weight, not dollar price.”

P.S. Gold and oil stand the best chance of performing well, as they have done historically, when the markets get wrecked like a college student who’s had a bit too much bourbon and weed on a Friday night. Please, take a moment to review a word from our sponsor below.