After the 25-point interest rate increase last week, Federal Reserve Governor Christopher Waller said that the next few hikes might need to be in 50-point increments.

It highlights the Fed’s model and belief that there is a perfect formula for monetary policy. Turn the right knobs, flip the right switch, each at exactly the right time, et voila! You’ll have endless prosperity. Nary an interest rate decision goes by without their triumphant confidence.

Then the fun begins. Every press conference, every release of the Fed meeting minutes, is followed by the nattering of financial journalists. “The rate hike was too little, too late”… “The Fed shouldn’t be raising rates during a European war!”… “Inflation isn’t the issue at all, it’s supply chain interruptions caused by the pandemic!”

We’re recent participants in an American phenomenon known as March Madness. We’ve never been interested in basketball. In fact, we barely understand the rules. Nor can we figure out the difference between a point guard and a power forward. Heck, we didn’t know there were that many humans on the planet hovering around 7-feet tall.

But now we have a son who’s a freshman at Purdue. The Boilermakers are pretty good this year. They will play in the Sweet Sixteen game this Friday against St. Peter’s University. Suddenly, we have opinions…and like everyone, we’re not afraid to use ‘em.

We discovered, strangely, that everyone we know has their “bracket” mapped out to get to the “Final Four.” Trouble is, or so we understand it, almost no one gets it right.

Last Friday, for example, the 16 seed St. Peter’s beat the 2 seed Kentucky in the East conference. That’s good for Purdue, since they’re in the same conference, but it’s not good for anyone who was betting on Kentucky to make it to the Final Four. It certainly wasn’t good for Kentucky.

There are as many opinions as spectators to the spectacle that is the Fed funds rate announcements, too.

Saifedean is the author of two bestselling books, The Bitcoin Standard: The Decentralized Alternative to Central Banking and The Fiat Standard: The Decentralized Alternative to Human Civilization.The Bitcoin Standard has been called the first academically rigorous examination of the impacts of Bitcoin on the global economy and geopolitics. And it has been translated into over 30 languages.

Dr. Ammous puts the difference into even starker contrast.

“The Keynesian economics that you learn at university and the Austrian school,” Saif tells me, “are probably as different from one another as astrology is from astronomy. They nominally talk about the same thing, but they’re entirely different ways of approaching the topic.”

Ever since Nixon uttered the words, “we’re all Keynesians now” upon signing the act that closed the “gold window” in 1971, Fed policymakers have been just that: economists of the Keynesian persuasion. Their first question is what “the government should do in order to make the economy better, in order to fix unemployment, in order to prevent inflation from being too bad.” (And now, what should the central bank do to avert climate change?!)

The Austrians, however, “look at individuals as the decision-making units, an approach based on reality as it is.” They see “economics as the product of human action,” not an outcome of political theory.

Those different approaches are why the Fed’s policymakers and their henchmen are so obsessed with statistics. They’re looking for “scientific relationships that will hold across space and time for how these numbers will work with each other.”

Dr. Ammous calls it “physics envy” — which also explains why the Fed’s efforts have almost always ended in failure. They cling to any furtive proof that their policies are having the desired effect… only to be caught by surprise when the individuals who make up the real economy don’t follow a mathematical formula. Gasp! 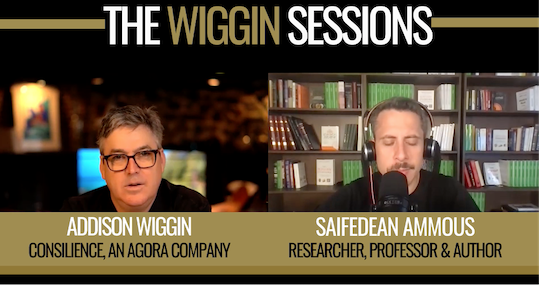 You can catch our full interview with Saifedean Ammous, right here.

“Human beings are not predictable lumps of matter,” Saif says. They aren’t easily controlled, which is why he believes the future belongs to a currency that also can’t be controlled — Bitcoin.

“Bitcoin can replace the monetary system,” he says. Hear Saif’s compelling case for Bitcoin as more than just an object of speculation in today’s Session by clicking the picture above.

P.S. “The Ides of March is when Caesar was killed,” says reader Terry M. “I have no idea where you get your info.”

I assume he’s referring to our Saturday recap, which stated that the “Ides were the day of the month that debts needed to be paid.” Clearly he didn’t read the Tuesday missive, which outright stated the Ides of March are “best known as the date of Julius Caesar’s assasination.”

But, believe it or not, days can be significant for more than one reason. For instance, my wife and I were married on Dec. 31. If I said, “Dec. 31 is my wedding anniversary,” would I get angry emails declaring that the day is actually New Year’s Eve?

The Roman calendar broke each month into three parts — the kalends, the ides and the nones. In other words, every month of every year had an ides, usually right in the middle. That info comes courtesy of the Encyclopedia Britannica.

Now, to be fair, we learned about the ides being the day for settling debts from a National Geographic article, which doesn’t give a source for that tidbit. Other online articles parrot the same information, though we have since found a blog post claiming “the evidence for that is minor.”

All we can say is that we do our best to verify the information we provide. Our implication was the government might take a cue from the ides, if, in fact, the ides were a time to settle debts. But who’s paying any attention to that?

Please continue to let us know when you think we’ve made a mistake at WigginSessions@5minforecast.com.