“A financial crisis is a great time for professional investors and a horrible time for average ones.”

If you’re an investor, you know we just passed through the worst performing first-half of a year since 1970.

That’s if you’re tracking the S&P.

The Nasdaq too is having its own worst year since 1962.

Tech stocks as a group are suffering their worst six months… ever. We could talk about crypto, but that ship has sailed for now. Meanwhile, the dollar and treasuries are rising.

WTF, my kids would say. They even bought me a t-shirt that says the same (though it stands for the Waterfront Hotel, rather than the hissing pejorative).

But back to the S&P, since it’s a broader indicator of the market.

For some people, 1970 doesn’t seem like a long time ago. But to be a snot about it, that’s over half a century. More than a wee two years longer than my own life.

So it’s not a stretch to say, barring the mess in 2008, this is shaping up to be the worst financial crisis of my lifetime.

Lest we get overly vertiginous over the timeline, let’s look at where we stand at the top of this week.

Most prognosticators are expecting a 100 basis point hike when the Fed meets on July 26, to counter June’s 9.1% inflation rate in consumer prices. Some say 75.

If I’m cranky about it, I would say, “Who cares? The deed was done when “they” locked down the economy and started handing out checks directly from the treasury to people who were no longer allowed to work.”

Here’s where the story gets good.

My guest on The Wiggin Sessions this week is Marin Katusa. He’s been called a maverick, a genius, a maven by some of the folks I’ve known longest and respect the most in this business – Jim Rickards, Doug Casey, Rick Rule, among them.

Marin claims we haven’t yet seen the worst of Pandemic policy disaster.

Having been around the world several times – hitting all seven continents – looking for resource projects to invest in, he’s noticed that investing in the United States still holds two advantages: massive (if crumbling) infrastructure and a resounding faith in the rule of law (if crumbling). 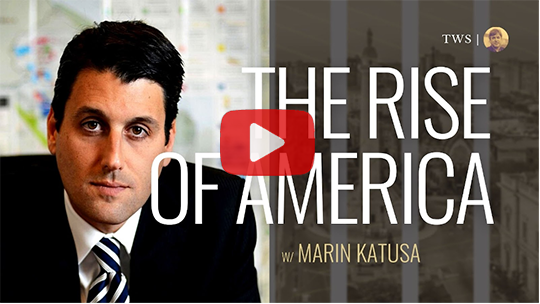 He makes the case that the U.S. is still positioned to survive and thrive following the recession – nay depression! – befalling the world because of bungling bureaucrats and numbnuts globalists.

Check out his forecast right here.

P.P.S. Marin is Canadian. Even Canadians, and folks from the northern climes of Minnesota, will recognize the accent when he says the word “about”.