Scanty Eyes on the Fed

“It was the biggest inflation and the most sustained inflation that the United States had ever had.”

Within 18 hours, we could see a rate hike of 50 basis points… the highest in 22 years… and see if Chairman Powell can schmooze the markets long enough to settle them down.

The unsuspecting public – that’s “us” to them! – is getting slammed by inflation, aghast at plummeting stock prices, and holding their breath to see if the Powell Fed is going to stick to their plan and get even more “aggressive” than their puny little hike in March.

How many folks are channeling Paul Volcker these days?

For years, Volcker and his successors tried to tame the beast. I met him once in his office many years ago… he had a caricature of himself in the hallway outside his door. Somebody had drawn the large man as a viking slaying the dragon “Inflation.”

Now, we’re at it again… but for all our hand wringing and long interviews it seems like today’s Fed lacks Volcker’s temerity.

A Wiggin Sessions alum, Graham Summers, said “inflation is here and here to stay” back in April 2021.

We’ve already seen a volatile “head-and-shoulders” market over the last week. Stocks are plummeting. Our Jim Rickards is bracing for a 80% drop in the Dow.

So… where do we put our money right now, if not in the markets?

James Altucher said on The Wiggin Sessions a couple weeks ago: if you’re looking to make a defensive, reactionary play: “gold is a ‘flight to safety’ for older generations, while younger generations prefer crypto.” 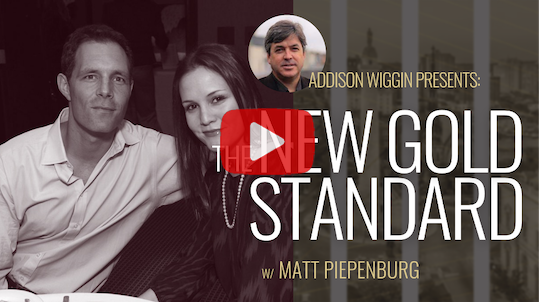 Matt Piepenberg echoes this sentiment in this week’s Wiggin Session: “I look at gold as insurance for currencies that are diluted and burning to the ground.”

Hopefully the Fed navigates this soft landing without any turbulence… In the meantime, let’s prepare for the worst and expect a crash.

P.S. In other news: Watch angry people throw tomatoes at the newly re-elected French President Emmanuel Macron, here. Looks like it’s going to be another tough term for the Free French. Too bad, really, those tomatoes would make a nice ratatouille.

Oh, also this from Bloomberg: Citigroup’s London trading desk was behind a flash crash that sent European shares tumbling on Monday. A trader made a mistake “inputting a transaction,” Citigroup said late last night, after a knee-jerk selloff in Swedish stocks in five minutes wreaked havoc, wiping out 300 billion euros… that’s $315 billion dollars.