“The hardest thing of all is to find a black cat in a dark room, especially if there is no cat.”

We spent this week talking about COP26… the UN Climate Change Conference in Glasgow, which may unleash new policies that affect your wealth in unexpected ways.

Our Jim Rickards thinks its outcome could be so profound that he hosted a special event with Marin Katusa to discuss the perils and opportunities.

But the race to eliminate carbon emissions is just one challenge you face in our rapidly changing world. In fact, Mark Moss, my guest for this week’s Session, warns your freedom and even health could be in danger.

Mark has put together an in-person event in Miami to explore all facets of surviving and thriving as the pandemic wanes. You can join his Market Disruptors Live 2021 event online if you wish. Or get some sun with Mark and his guests in Miami, Florida, Nov. 12-14.

Here’s a look at everything we discussed this week.

We’re willing to entertain the idea that we need to prepare for a “new normal” when it comes to extreme weather. But I think the problem is much bigger than a bunch of politicians can solve, especially when most of their ideas involve unfeasibly fast changes to how we live our lives… and crushing new taxes to pay for these schemes. The result could be a brand-new energy crisis — one that will hit your bank account from multiple angles. And the best way to protect your wealth from any inane promises or policies that come out of Glasgow is to understand what’s coming, then get ahead of it.

Mark Moss, this week’s Wiggin Sessions guest, explains that the current policies the natterers in Glasgow have passed have already created a global energy crisis. You can see the not-so-hidden results at your local gas station, where prices have surged nearly 40% since January. Or consider natural gas prices, which have doubled since the start of the year. And if you use heating oil, expect to see your bill increase 33% this winter. Things are even worse overseas. “Energy prices are going up in Europe,” Mark tells me, “800% on natural gas, 400% on electricity.” He adds, “It’s definitely a manmade crisis.” The only reason these shortages exist is “because of policies that were put in place.”

Money Out of Thin Air

One of the reasons for the pollution-spewing get-together in Glasgow is to figure out how to implement promises that leaders made at COP21. That event in 2015 saw the creation of the Paris Climate Agreement, which was ratified on Earth Day in April 2016. One of the major sticking points of the Accords has been Article 6, which mandates the creation of a global market for carbon credits — a key part of a system also known as cap and trade. The system is far too lenient to actually reduce emissions, but it’s often sold as a “free market” solution to climate change.

Unpacking the Hypocrisy in Glasgow

The Glasgow Financial Alliance for Net Zero (GFANZ) was formed in April 2021 with the goal of raising enough money to end greenhouse gas emissions by 2050. Yesterday, GFANZ co-founder Mark Carney announced that it had secured $130 trillion in capital commitments. “We now have the essential plumbing in place to move climate change from the fringes to the forefront of finance,” Mr. Carney said, “so that every financial decision takes climate change into account.” Does “every financial decision” include things like buying a house… starting a business… sending your kids to college? Mr. Carney would probably answer in the affirmative. He has a long history of butting into people’s personal affairs.

COP apparently stands for “Conference of the Parties,” which makes it sound more like a college spring break event than a meeting of world leaders. Or maybe a soviet confab. The 26 is only there as a reminder. These folks have streamlined around the globe 25 times previously to gather, drink champagne and talk about “saving the planet.” As we noted yesterday, nice gig while it lasts, eh? There’s good money in a climate crisis. 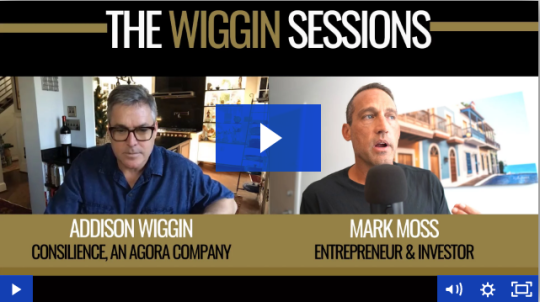 You can catch our full interview with Mark Moss, right here.

This session with Mark was fitting for Halloween. From his remarks, I felt like the guy was my doppelganger. He delivers the macro picture with aplomb. It’s worth a watch, listen or read, whichever poison you prefer.

P.S. In light of Glasgow, the climate change debate, pandemic and vaccine rollouts, next week we’re going to take a look at what our guest calls “intentful living” — ways to filter out the things you can’t control and focus on the things you can. At each moment, we tie it back into your investment strategy. Frankly, it was one of the more enjoyable Wiggin Sessions we’ve conducted in the past (almost) two years. Stay tuned.