“The best way to predict the future is to study the past, or prognosticate.”

“I’m betting ‘it’ comes not in the form of some unforeseen physical meltdown or other single failure,” our reader Carl begins, “but rather in the form of a hither-to-unrealized failure of our existing institutions to successfully cope with a pileup of multiple linchpins of shortcomings simultaneously.”

Carl is talking about Grid Down, Power Up, the documentary we’re discussing this week with David Tice. The film is not out yet, officially, we’ll let you know when it is.

The concern raised in the project is that the power grid is old and more fragile than we expect. It’s more susceptible to cyber attack than we believe. The grid is more vulnerable than we suspect. Even electromagnetic attacks are possible from our “adversaries”. But there’s more…

“If there were a political crisis similar to the Jan. 06 insurrection,” our reader Carl continues, “which also caused an electrical grid failure and/or a national medical crisis or pandemic like the one we may yet be coping with, then we could easily be headed for a massive cumulative crisis on many fronts at once.

“We can only hope that nothing like that catastrophe would occur, but I would not be one to lay odds against it, given such a disaster.”

Hear David talk about it here: 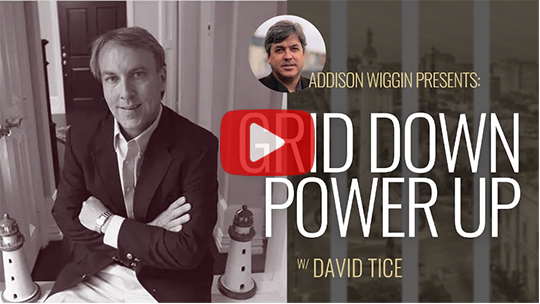 David Tice on the fragility of our power grid, here.

The “power up” part of the doc is what David believes is our ability as citizens to understand a complex situation and solve it on our own. He’s started a non-profit to raise awareness. Politics is not really our bag, but we’ve known David for many years so we’re not one to quibble. His attempt to raise awareness is genuine.

P.S. The Prudent Bear Fund, which Mr. Tice conceived of and founded, is up 5% in the past month.