“For me it was just red wine in my mouth and a pile of firewood.”
– Jack Kerouac

When politics lead the real economy, we are all doomed.

If you haven’t been watching, there’s an international whodunnit taking place. Pundits the world over are playing armchair detective. Here are my three cents.

(Aside: You can write to me about your opinions on the War in Europe here: WigginSessions@5minforecast.com)

Step one: The Incident

The Nord Stream pipeline in the Baltic Sea has sprung a leak. You can see it mapped out below: 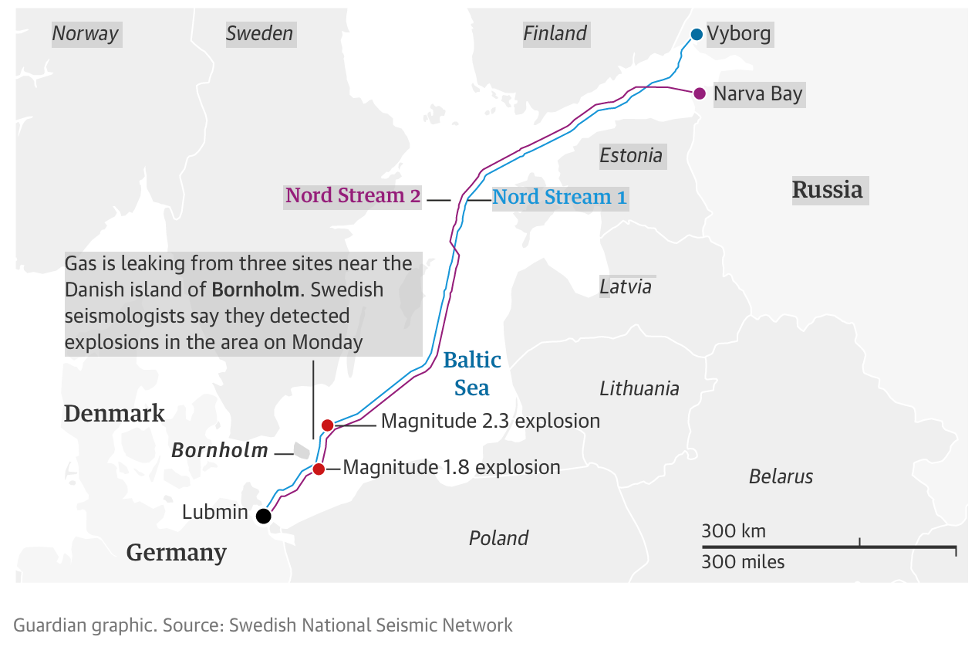 The Swedes, Danes and Germans all believe the leaks are an act of sabotage. Seismologists in Sweden heard two distinct blasts shortly before the leaks were sighted on the sea surface.

What’s the motive? Who benefits?

Sean Ring of the Rude Awakening does an excellent job of tracing the motives back to their actors.

Even if some of it may be conjecture, Ring’s musings are worth a read. (Hint: Sean leans heavily in favor of some covert op from the Americans. Think Tom Clancy novel meets Dr Strangelove.)

Let’s say it is sabotage and more than just a media kerfuffle. If the Nordstream accident does prove to be an act of sabotage, then the incident also represents yet another escalation of the Russian invasion of Ukraine.

Now, you’ve got Germany, Denmark and Sweden directly involved. Their lights will be shut off without an infusion of LNG from the US.

Finland, by extension, has already been sucked into the mix, as several hundred thousand Russians flee Putin’s draft by crossing the land bridge that connects the two countries. 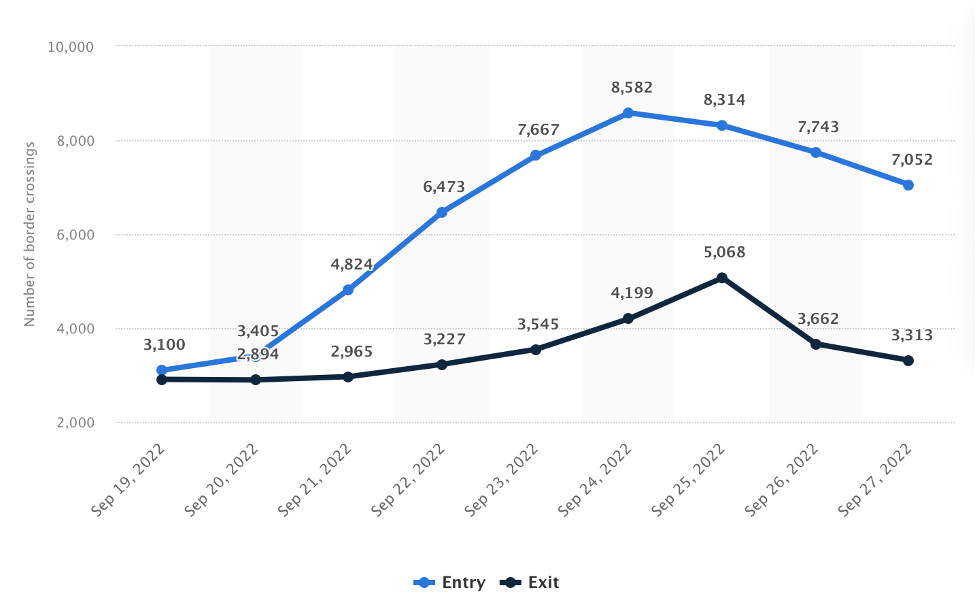 Russian border crossings to and from Finland, September 2022
(source: Statista)

This Russian exodus rhymes with other events in history. It was before my time… but I grew up with stories of Americans fleeing to Canada to avoid serving in Vietnam.

The Russians fleeing their own version of “the draft” may be dashing headlong into a nightmare winter in Europe. “By the close of this year in Europe,” Bill Bonner said in our most recent Session, “they’re expecting a very, very bad winter because people don’t have gas.” We published these comments three weeks before the pipelines were damaged. The incident only inflames the conflict.

“They don’t have energy,” Bill says, speaking to us from Ouzilly, his home four hours south of Paris. “The price of electricity in Europe today, and I’m right here, is priced as though oil were trading at $1,000 a barrel. That’s pretty darn expensive.” Bonner continues:

During the Pandemic we got a front row seat on how supply shortages can happen; how geopolitical mayhem can work its way into your life.

In response, to get our heads out of the Whodunnit and the finger-pointing… well, we can take care of ourselves. In New Hampshire, where I grew up, we still heat with firewood.

Gathering and curing the wood is a several year process. It requires foresight, wherewithal… a little bit of luck – the same traits you need to make it through a deep freeze in the markets.