“Steer Clear Of Those Murder Holes”

“That’s the thing about the collapse of civilization, Blake. It never happens according to plan… The end comes in unforeseen ways; the stock market collapses, and then the banks, and then there is no food in the supermarkets…”

Just as I was cracking my knuckles in prep for today’s missive, I caught the opening 20-minute scene of Spielberg’s Saving Private Ryan on AMC – the greatest war sequence ever filmed.

The first piece of advice Tom Hank’s character, Captain Miller, gives to his crew as they’re about to become target practice in their amphibious landing vehicles on Utah Beach is: “Steer clear of those murder holes”.

“Good advice,” I thought… Given we write about economics, politics, history and the financial markets.

Let us count the ones we’ve covered so far:

And now… an impending “Food Shortage” in America – never! – caused by a conflux of “all of the above”.

We spoke with Mark Rossano this week on TWS.

Mark is the CEO of C6 Capital Holdings. You’ll note C stands for carbon on the table of elements. 6 is carbon’s atomic weight. You can imagine where on the economic table Mark finds his bread buttered.

Mark has been covering supply chain challenges in the global food supply since 2017, well before the Pandemic shut down large swaths of the economy. He’s also been tracking naturally occurring floods, fires, droughts…

One locust swarm in particular manifested in Sudan and survived its way on the wind all the way to SouthEast Asia.

Regardless of your thoughts on “global warming”, “climate change”, “green energy” or whatever politically orientated term is in vogue, Mark has been tracking the real world impact these disasters have on the food supply.

Mr. Rossano is worth a listen not least for the advice he gives the Individual Investor like you and me. Click here to skip right to his picks.

Or watch the full video, here, for the bigger picture: 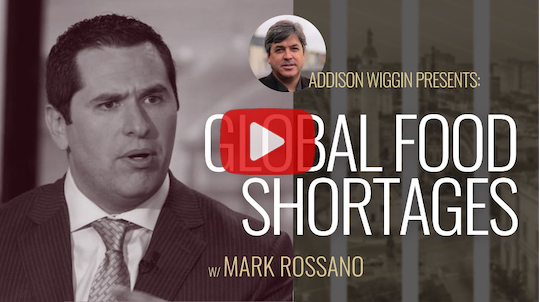 “Should I be worried about food shortages here in the U.S.?”

Tomorrow, we’re going to trace a “glitch” in the supply of fertilizer to the Midwest at a critical period in the spring planting season.

The race horse Rich Strike won the Kentucky Derby 2022 over the weekend. If you had bet $1 dollar on the “Superfecta”, you would have yielded $321,000 and change in winnings. Good enough to attract a few Bitcoin investors.

Rich Strike was hungry for a win. Pun intended. If you missed it, the colt continually bit the mane of the track poney leading him back to the pattock.