This is not the first time I’ve had a hangover on a Monday. Bad wine has a way of ruining your day before it has even begun. As the Romans said, In vino veritas.

Today, though, it’s not the liquor that’s giving me a headache.

It’s the stupid economy… FAANG – Facebook, Amazon, Apple , Netflix, Google – stocks are getting hammered. Amazon is falling like Icarus too close to the sun.

This week on TWS, I talked with Matt Piepenburg of Matterhorn Asset Management.

Some context: Ten years ago, I brought my son Henry to meet Egon von Greyerz, the founder of Matterhorn. He smuggled us into a gold vault in the Free Trade Zone deep under the Zurich international airport. I believe it was illegal at the time., might still be. (Sorry, Egon.)

Egon and I have been friends for a long time. I’m glad he put me in touch with Matt. We share an interest in the Great Books. He had a lot to say. And was, as you’ll see, very articulate about the Fed and its antithesis, gold.

“I hate losing more than I like winning…” he said frankly, piggybacking on Michael Lewis’ book and film Moneyball. “And I’d choose gold over Bitcoin anyday. Think preservation not gain. Risk management is everything.” 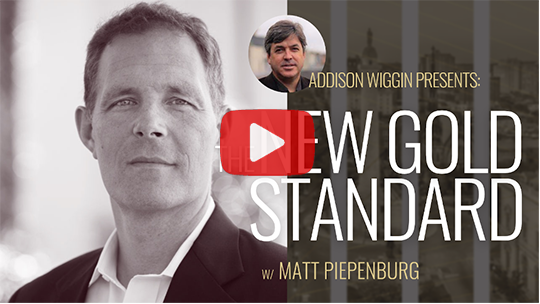 Piepenburg: “I look at gold as insurance for currencies that are diluted and burning to the ground.”

Goldman has predicted $2,500 dollar gold by the end of this year. James West of the Midas Letter, in our session a couple weeks ago, said he thought gold, unhinged from the manipulators, would be trading at $60,000.

I’ve gone on record myself saying “I’m not a ‘Gold Bug’,” per se. If I was, I would’ve sold all my houses and dumped it into some bank in Salt Lake City or Switzerland. You can still do that yourself if you open an account in the Hard Asset Alliance.

That being said, our friend Marin Katusa has just opened a new fund for investing in precious metals… and he thinks the time to act is now. You may want to take a closer look.

I’m watching it closely, myself… without a horse in the race, yet.

“To borrow from Jim Rickards,” Piepenburg urges, “I think those that have the most gold have the most chips.”Matt, in our view, makes a great argument and is worth listening to.

As individual investors, we’d rather not lose, than chase the FAANGs into the ground.

P.S. Over the weekend, Warren Buffett bet big on the stock market. The old fart and his pal Charlie Munger are known to hold insane amounts of liquid cash… Is this a powerplay or a bailout, not unlike his Bank of America play back in 2008?

Who’s to say we’re not all being duped into “buying the dip” once again? If we’re thinking about preservation, Katusa again comes to mind… This might just be the perfect time to put your money in gold.