The Dangerous Rise of Anti-Economics

“It is no crime to be ignorant of economics, which is, after all, a specialized discipline and one that most people consider to be a ‘dismal science.’ But it is totally irresponsible to have a loud and vociferous opinion on economic subjects while remaining in this state of ignorance.”

Jeff Deist readily admits he’s not an academic virtuoso or intellectual heavyweight — which may make him seem like an odd choice to run the Mises Institute.

But the organization isn’t just about promoting Austrian economic principles. It also tries to put those concepts into terms everyone can understand. And today that mission seems more important than ever, especially with modern monetary theory (MMT) proponents calling the shots.

MMT essentially says we can legislate our way to prosperity — a concept that’s so divorced from how money really works that Jeff calls it “anti-economics.”

We spent this week sharing Jeff’s Austrian perspective on a wide variety of topics, as you can see for yourself…

The Austrian Guide to World Peace

Most economists focus squarely on numbers — using math to describe how money moves through the financial system. They believe that explaining and solving recessions and depressions is just a matter of finding the right mathematical model. The Austrians, on the other hand, deride using formulas to explain economic forces. They believe every transaction is governed by innate human rights and common sense. Imbalances only occur when something interferes with those natural conditions, like the heavy hand of government. In fact, Austrian economic thought can be applied to all sorts of problems — even geopolitical quagmires that have vexed diplomats for decades…

Revisiting the “Sage of Baltimore”

We consider H.L. Mencken the “Sage of Baltimore.” He didn’t show fealty to anyone, and his scathing editorials in the Baltimore Sun and other publications touched on all aspects of the human condition. In fact, Mencken’s thoughts on out-of-touch Americans are just as relevant today as they were when he first wrote them in the 1920s. Here Jeff explores just one example of Mencken’s precience…

The Most Evil Tax of All

This week the Federal Reserve admitted that inflation is rising faster than expected. And it plans to take action by raising interest rates… two years from now. In the meantime, the Fed will continue to inject cash into the economy by buying up assets. Fed Chairman Jerome Powell apparently doesn’t see any connection between the Fed’s endless money creation and ever-rising prices. That attitude is just going to make things even worse — threatening to harry your wealth as the dollar loses value.

The Truth About GameStop and Other “Meme Stocks”

I don’t get “meme stocks” — what the financial press now calls companies touted on online message boards like Reddit. Someone essentially posts, “let’s buy this stock,” and everyone piles in — regardless of whether it’s actually a good investment or not. The hard part has been identifying the heroes and villains of these stories. While it’s nice to see everyday folks profiting at the Wall Street elite’s expense, their choice of vehicles has been questionable. We’ve also speculated that it’s just another symptom of too much money sloshing in the system — making people so flush with cash that they confidently invest out of pure spite… 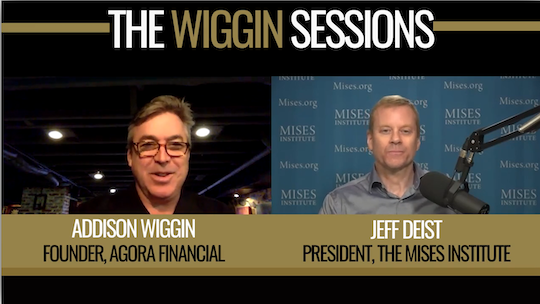 With that warm-up, you’re ready for my full conversation with Jeff. We discuss his experiences as Ron Paul’s chief of staff… the problems that Washington’s unchecked spending will cause… and how the country can get back on track.

Just click on the picture above to watch the whole thing.

P.S. We’ve done 49 of these “Surviving and Thriving” interviews, now known as The Wiggin Sessions. Originally our 50th was going to be something special… but we’ve been forced to rethink what it will be.