The Death of the Office

I should have burned this place down when I had the chance.

Since the world ended, the office buildings of the Agora Companies have been a wasteland. 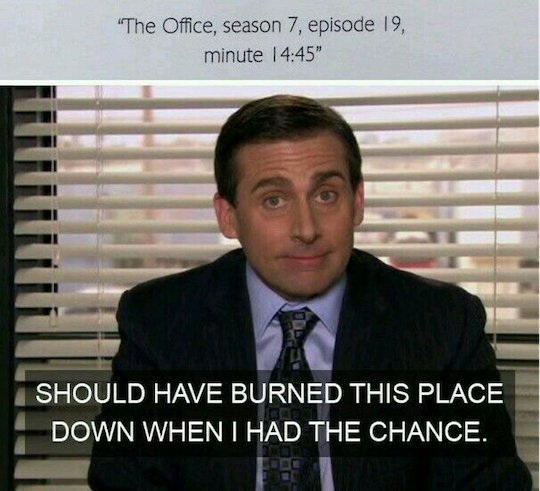 Where did everyone go?

Most of our employees, when given the choice, choose to work from home.

It’s not the result of poor management, however.

The Death of the Office is a deliberate reorganization happening in the world’s labor markets. The Davos Crowd calls it the Great Resignation. They’re wondering where everyone went while they sit on the fortieth floor of their empty high-rises. The janitor knocks on the door to ask if they should even bother cleaning, breaking them from their reveries of days gone by.

Our biggest concern is still what to do with the fishtank we’d installed in our own office mere weeks before the lockdown, dubbing the room “The Fish Bowl.” We’ve been trying to sell the tank… or just the fish. Nobody wants either. The whole kaboodle weighs 290 pounds. And if we don’t clean it bi-weekly the water becomes brackish. The fish begin to suffocate.

When we go into the office to say ‘Hi’ to the fish or just check on things, we feel like we’re on the set of “I Am Legend.” It’s clear people used to work, eat, lounge, frolic, kibbitz in there. Then one day everyone just disappeared.

The detritus of a once vibrant and creative office environment is evident.

“It looks like some people left for lunch,” said one of my colleagues who was there last week, “and just never returned.” We ourselves were in there collecting personal items from all over the building.

We walked around and shouted into the void of every room the tagline from the old Arby’s commercial “where did everybody gooooo?!”

Ronan McMahon has a clue where everyone is; he’s played a huge role in relocating a lot of our employees from their desks in-office to “best-in-class” international destinations. Toes in sand.

Why? Because they can.

After all, the Agora Companies preach financial independence.

What greater way to express the wisdom of our conduct than to live the blue-chip lifestyle overseas?

That’s not to say, however, that the conversation that is struck up around the watercooler isn’t valuable.

“What do you think of, for example, Elon Musk trying to get his own employees to go back to the office?” I asked Ronan in our Session this week. “How do I build a business if I can’t get my employees to come to an office?”

His take. The very way we work is changing:

Within my business, interestingly, there’s one team where they’re all expected to be in an office all the time because they’re doing customer care. They’re on the phones, and we feel like that kind of energy and dynamism is very important. For the rest of us, we’ve always been scattered, because we need to have boots on the ground finding deals, not stuck in an office together. So I see this evolving in a way that there’ll be functions and there’ll be businesses where people will always need to be there. Elon Musk will always want his people around him. These are probably people cranking 18 hour days, sleeping on the floor, all that stuff. That job isn’t for everyone.

So… Business as usual?

In the end, our business is about communication and absolute ownership. It doesn’t matter where you are. As long as you’re accountable.

The way we do things has changed. But at the core, things remain the same.

“We’re in this very, very fragile moment,” Ronan continues. “If we’re on the verge of a major recession, what happens then? What happens once people start getting laid off? We’re going to see another spike in the Gig Economy. Where are all these people going to go? I believe it will further, again, accelerate these trends. So the real estate that I find and recommend for RETA members, it’s real estate with a really distinct mode.”

Click here to hear more from my discussion with Ronan McMahon.

P.S. “I have some very exciting, hot-off-the-presses news,” Ronan wrote to his readers this morning on the Real Estate Trend Alert. “About our opportunity at the Village at Corasol in Playa del Carmen…

“We’ve just got word that buildings three and four now have their construction license in place. The license for building five is expected to be ready in the coming weeks. If you were one of the fortunate members who got in on the deal, congratulations!”

We’ll let you know when Ronan announces his next deal. In the meantime, click here if you’re not already signed up for his newsletter yourself.