The Extraordinary Madness of Popular Delusions

Soon after the “shock and awe” invasion of Iraq in 2003, we recall being harangued by readers of the Daily Reckoning.

We were used to it.

My writing partner at the time was Bill Bonner. The Daily Reckoning was conceived during the Tech Wreck of 1999-2001. We had taken the unpopular view that many of the tech companies people were investing in were nothing more than moribund brick-and-mortar shells brought back to life by the simple addition of a “.com” on their names.

During the time, our most formative view on wars, inflation and markets came by researching extraordinary popular delusions and the madness of crowds. We started, of course, with the Charles Mackay classic of the same name, first published in 1841. Those missives formed gave rise to the then international best-seller Financial Reckoning Day.

When the U.S. led a “coalition of the willing” during the second Gulf War, we again took an unpopular stance and asked simple questions like “where are the weapons of mass destruction?” Gasp. As much as we were taken aback at the reaction elicited by being wary of speculation in tech stocks… we were even more surprised by the scorn directed at us for questioning the motives for invading Iraq; neither delivered a sense of schadenfreude for having been right.

We were reminded this morning, by Dave Gonigam of the 5 Min. Forecast, of the opprobrium heaped on upon us by our own readers. Dave forwarded us this article “People Just Want To Feel Good About War Again” suggesting it could help us with framing our Wiggin Sessions interview with John Robb this week.

“Even if you take the dominant position on Ukraine,” author Freddie deBoer writes “which is that Ukraine is a blameless victim and Russia an evil aggressor, that nothing other powers have done does anything to explain Russia’s behavior, let alone excuse it, and that NATO and the United States must take extraordinary measures to support Ukraine in this conflict.”

None of that is incompatible with the observation deBoer is making, which is this:

The fickle American imagination will turn to other things. And the future of Ukraine, even in an optimistic vision where they resist any substantial permanent capture of land by the Russians, will still be unsettled, still saddled with a weak central government, endemic corruption, a virulent strain of ultra-nationalist far-right sentiment, and the consequences of now being stuffed full of foreign arms and ordnance.

In his post, Freddie deBoer has taken the unenviable position of defending Noam Chomsky in an interview Mr. Chomsky gave to Foreign Affairs magazine entitled “…on how to prevent World War III.” The position is unenviable because Chomsky is a lightning rod for criticism because when he’s not an outright anarchist he’s a progressive socialist.

And yet, he makes a point similar to ours and Mr. deBoer’s, you can hate the war and Putin’s motives, while not necessarily being swept into the popular delusion that Ukraine and support from the West are morally pristine.

“What we saw when Russia invaded Ukraine,” John Robb says, “wasn’t a traditional response between global superpowers, between the US and Russia. What typically would happen is that if Russia invaded Ukraine, then the US would mobilize resources to help Ukraine defend itself and also do targeted sanctions. Just to push them towards resolution.”

That’s not what happened… 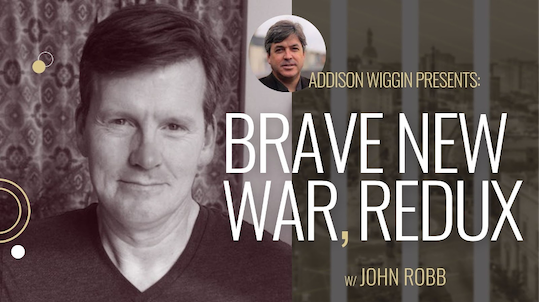 “The Russian invasion of Ukraine represents history’s first ‘social media’ war.” Watch or hear John’s full description of the global “network swarm” and what it means for the future of markets and the economy, here.

“What we saw instead was the network response,” Robb asserts, “where millions of people across the board and corporations inside of government, in different branches of government, across different governments, individuals operating as individual hackers and the like, all taking action simultaneously to initially defend Ukraine. Then eventually they started focusing on Russia.”

We first met Mr. Robb during the aftermath of the U.S. invasion of Iraq. He’d just published a book called Brave New War: The Next Stage of Terrorism and the End of Globalization. He’s the founder and editor of Global Guerrilla’s and spent the last year working for the Chairman of the US Joint Chiefs of staff on his vision for how AGI and robotics are likely to transform warfare through 2035.

By his own admission, requests for him to speak on podcasts have increased dramatically since the war in Ukraine began.

“By now you’ve heard,” writes our friend Frank Holmes and Wiggin Sessions alum, this morning, “the annual rate of inflation hit a 41-year high of 8.5% in March. Prices for food, energy and used vehicles increased the most, with pre owned cars and trucks jumping 35%, gasoline 48%.

“But here’s something you may not know: The Bureau of Labor Statistics (BLS), which issues the monthly consumer price index (CPI), has changed its methodology for measuring inflation more than twice over the past few decades. Today’s CPI doesn’t actually tell us how much prices have changed; instead, it allegedly tells us changes in the cost of living.

In 2020, I called the CPI “fake news.” In reality, inflation as you and I understand it is running much higher than reported.” Frank parses the numbers in the March report, here: There’s More To Inflation Than The War in Ukraine.