The Future of Wealth Creation

“Science is magic, if it works.”

Technology continues dominating the headlines, whether it’s the billionaire space race… COVID’s “Delta” variant… or the global shortage of microchips.

I have been fortunate to have our science advisor Ray Blanco on hand to walk us through all of these big issues… and how they affect your investment portfolio.

Here’s a quick look at everything Ray and I discussed this week.

The jet engines that took my family home from Florida are largely the same technology that powered commercial jets in the 1960s. While they’ve gotten lighter and more efficient, they haven’t gotten much faster. The last real speed breakthrough for globetrotters were the supersonic airlines — which were all mothballed two decades ago. But according to Ray Blanco, we’re finally on the verge of a travel revolution — allowing us to get from here to there in record time. And it will be all thanks to moguls like Richard Banson and Jeff Bezos. Here’s why he thinks the billionaires’ daredevil antics will benefit more urbane travellers in the near future.

The CDC Changes Its Mind… Again

Centers for Disease Control (CDC) officials are once again urging people to wear masks indoors… even if they are fully vaccinated. It’s a full reversal from May, when the agency said the vaccinated didn’t need to worry about masks or social distancing. Of course, at the start of the pandemic in March 2020, the doctors in charge issued fiery jeremiads against wearing masks. And these people wonder why no one trusts them? So is the “delta variant” really a thing — or just a way to keep the fear going for a little longer? Ray suggests it’s a little of both.

The COVID vaccines have been great for drug companies’ bottom lines. Today Pfizer said it sold $7.8 billion worth of shots in the second quarter… with a total of $33.5 billion in sales expected by year-end. The company also stressed once again that everyone might need a third dose of its product to stave off the delta variant. Needless to say, mandating a third jab would boost Pfizer’s profits even higher… which makes it easy to question the drugmaker’s motives. Ray admits it’s a concern. At the same time, he says, “there’s a lot of misinformation” about exactly how the vaccines really work.

A Lesson From the Forgotten Pandemic of 1977

The Russian flu pandemic of 1977 might not ring a bell, even if you lived through it. As pandemics go, it was a bit of a nothing burger. The first cases cropped up in northern China in the spring of 1977. The World Health Organization didn’t learn about the disease until a few months later. It turns out that the virus was remarkably similar to a flu strain that had circulated two decades earlier. So why did it suddenly return after a 20-year absence? One very real possibility is that a research laboratory screwed up. You can probably see where this conversation is heading…

Capturing the Deflationary Power of Technology

If you ever wanted to rile up the late Dr. Kurt Richebacher, there was no shortage of things you could ask him about. While it’s impossible to know which aspect of modern finance irked him the most, he seemed particularly venomous towards the idea of hedonic pricing. In the simplest terms possible, hedonic pricing is the government’s practice of manipulating GDP data by giving more weight to technology investments. Generously, the government statisticians want to quantify the cost-savings that newer technologies provide. George Gilder actually does something similar with his time-price theories… and Ray Blanco echoed the same thing in our conversation this week… 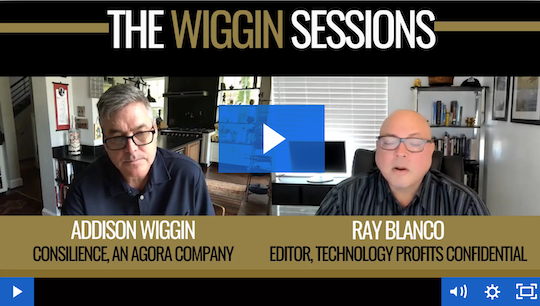 You can catch our full interview with Ray Blanco, right here.

And there’s a lot more we didn’t have time to discuss in our weekly editorials — including the companies Ray believes are leading the charge into the future. Just click on the picture above to hear our entire interview.

P.S. I asked Ray whether China was a threat to Taiwan’s robust microchip industry. ”I’m not a military analyst by any means,” Ray replied, “but it would be extremely difficult to do an actual invasion.”

That reminded me that we do have a well-spring of geopolitical and military knowledge on hand… and it’s been too long since we last spoke. So I set up a video conference with Byron King.

When Byron isn’t penning fascinating hagiographies of overlooked pioneers, he’s using his vast experience and know-how to delve into the metals and mining markets. As usual, our talk didn’t disappoint.

You’ll get to catch up with Byron next week.

Ed. note: Got something to say? Send your feedback to the Financial Reserve here.