The Inherent Value of Money

“There are some things in human experience that require standards and are unforgiving, like war. And maybe, over the long term, like the inherent value of money.”

In 2002, the stock market was tanking and it seemed like the Securities and Exchange Commission was uncovering a new accounting scandal every day.

Bill Bonner and I discussed these topics in The Daily Reckoning, laying the blame squarely on the lies spewing out of corporate offices. But a reader’s email convinced us that the situation was much more dire than we realized.

He patiently connected companies’ overstated earnings to grade inflation at prestigious universities. Then he explained how it was all part of systemic problems in our society, tying it to things like the 9/11 attacks and even military blunders in Afghanistan.

“The heart and soul of the bear market,” his letter ended, “is the consequence of a culture at war with itself over absolute standards.”

It was signed BWK… short for Byron W. King. Before long, we came to look forward to his thoughts… even depend on them.

So it was a great pleasure to continue our 20-year conversation this week. Here’s a quick look at some of the things we discussed…

There’s fresh tension between Taiwan and the People’s Republic of China. Last week, I asked Ray Blanco whether he thought the strain between the two nations threatened Taiwan’s microchip industry. Ray replied, “it would be extremely difficult to do an actual invasion and a physical takeover of Taiwan.” But according to Byron, it would actually be a lot easier than most people think. He cites some recent war games that suggest the U.S. couldn’t defend Taiwan if it wanted to… which calls into question the entire concept of U.S. military dominance. We may learn the hard way that the $753 billion we‘re spending on defense each year is a colossal waste.

Last weekend, U.S. Senators compromised on an infrastructure bill that includes $550 billion in new spending that will force the government to borrow money. Next the Senate will try to pass a $3.5 trillion budget, allocating cash to a whole host of progressive priorities, from climate change to social justice. Of course, the idea that government money can solve any problem was unknown in America until the early 20th century. World War I and the Great Depression offered policymakers the perfect excuse for making their move. But a few politicians and journalists recognized the power grab for what it was…

The Treasury Department has hit its credit limit and can’t borrow any more money unless Congress takes action. But we know how the story will play out. The party in charge will say the government has an obligation to pay its bills — demanding a new limit without reining in the spending that created those bills in the first place. The other side will suddenly start caring about “fiscal responsibility” and use it as an excuse to drag their feet. After a few weeks of moaning and concessions, they’ll vote to ensure the country doesn’t default. Then, once they’re back in power, they’ll freely vote to boost the ceiling again. But as far as we can tell, not a single politician has admitted what those trillion-dollar outlays are doing to the economy.

The Best Opportunity Hiding in the Infrastructure Bill

Title II, Section 40205, of the infrastructure bill allocates $140 billion for the construction of a “rare earths demonstration facility.” Rare earths, you may recall, are a group of magnetic materials that are essential for modern technology. Byron has followed this industry for years… warning that China’s stranglehold on rare earth supplies could jeopardize manufacturing around the world. The country has made deals in Africa and South America, “tying up the mine, the mill, the factory” or whatever else gives it unfettered access to the building blocks of our electronic gizmos. So the U.S. government’s attempt to get in the game may prove too little, too late. But it might also bring big opportunities for the right companies…

The Rise and Coming Fall of the Petrodollar

We’re rapidly approaching the 50th anniversary of the “Nixon Shock” — the day then-President Richard Nixon announced extreme measures to stop our country’s runaway inflation. Among his declarations was that foreign nations could no longer exchange U.S. dollars for a fixed amount of gold. The Bretton Woods system, which had kept currencies more or less in line since 1944, was effectively moot. By all rights, depegging the dollar from gold should have ended its status as a reserve currency. But Bryon explains why that didn’t happen… 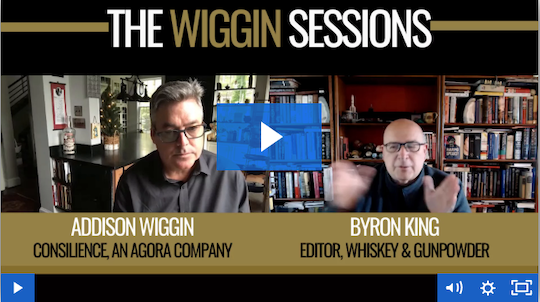 You can catch our full interview with Byron King, right here.

And you can hear plenty more in the complete interview, too.

Just click on the picture above for more insights into our government’s botched carrot-and-stick approach to economic growth… the current state of the oil and gas industry… and the names of specific companies that Byron is keeping his eyes on.

P.S. Next week, we’re going to pull back the curtain a little on the publishing business that we’ve dedicated our life to. It’s a rare look into the changing ways we communicate with you, including email, Zoom, YouTube, LinkedIn etc.

We interviewed a special guest to help. Stay tuned.