Watching the Fed is a fractious sport. Some think Powell is a “hawk” (come on, seriously?), and some say he’s a “dove.” My question is: Does this Fed board have the gaul to raise rates aggressively in an election year?

Uncertainty is not built into the market, contrary to popular belief.

“The reality of the situation we have not seen in generations is,” my friend Jeffrey Tucker wrote in Gilder’s Daily Prophecy this morning, “the Chairman of the Fed has about as much credibility as the head of the CDC. No one trusts authority anymore, not even the fanciest of the fancy. Gone are the days of worshipful adoration of Greenspan and the Committee to Save The World. Now these guys are seen as nothing but propagandists.” (See: Dr. Fauci starring in The Barbarians of Specialization.)

Case in point, we got this email Pat H., a reader, following yesterday’s issue on the “relief rally”:

“So, let me get this straight. The idiot who said ‘it’s transitory inflation’ is the same one who is now telling me inflation is way too high? And, not only that, because my government can’t piss money away fast enough, everything is going to cost me more while said idiot keeps printing money. Where do I sign up for a gig like that?”

We’re assuming Pat would enact a policy slightly more amenable to people who work hard, try to save their money and have a penchant for believing in a good life for their families.

We could be wrong or reading into the email a bit.

He’s also alluding to, whether intentionally or not, what Chris Leonard called the “Powell Pivot”. A well-meaning James Powell, graduate of Princeton and Georgetown, came on board to chair the Fed, so he could “normalize” interest rates. But he hasn’t been able to. (Let’s be charitable now, good people).

“Inflation is here and the Fed…” says Matt Piepenburg emphatically in this week’s TWS. “I’m telling you right now, the Fed will print more money again. They’re puffing their chest. You’ve got guys like Powell now. You’ve got Bridgewater, Goldman Sachs, you’ve got Neil Kashkari. You’ve got Lael Brainard, all of these former dubs now suddenly becoming hawkish saying, “we need to be more Volcker-like and raise rates.”

They want to raise rates 25 bits here and there. So they have anything, something to cut when there’s the next crash. And the crash is coming probably sooner than later. I can’t time it. No one can. But you want to be ahead of that curve by not being loaded up in credits and equities that are correlated, they’re going to tank together.” [emphasis is mine]

The Fed, as we’ll come to see, has already made a policy choice. It favors inflation over recession. And the immediate response from the spigot-suckers on Wall Street, yesterday, was “yay!”

Today, the trepidation. Too bad, suckers.

We all have to suffer at the hands of bad policy. Still we believe the market will out… buy gold, real estate, commodities… take care of your family.

P.S. A graphic looking at world media from Statista, only because we find ourselves keenly interested in free speech: 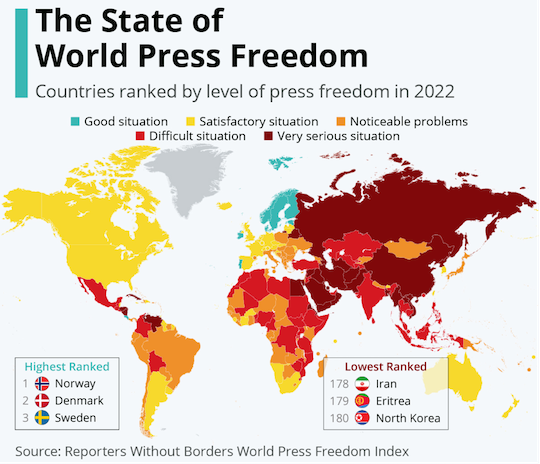 These numbers come just days after the White House Correspondents Dinner this weekend.

After Biden’s opening remarks – “Democracy is not a reality show!” – Trevor Noah, South African host of the Daily Show said: “I stood here tonight and I made fun of the president of the United States… And I am going to be fine,” exalting the liberties of the free press.

After the audience’s laughter died down, swishing their champagne flutes, he looked over at the “most powerful man in the World” … “I am going to be okay, right?”

P.P.S. In the meantime, on his Substack post, Matt Taibbi laments the fact that PayPal – who’s co-founder Elon Musk we spent some time talking about because of ‘free speech’ issues – is banning payments to writers criticizing NATO.