The Wealth Effect And The 92%

“Just as sound money goes hand in hand with liberalism, free trade, capitalism, and peace, so is inflationism
part and parcel of imperialism, militarism, protectionism and socialism.”

Yesterday, we left off with a paper published by the San Francisco Fed blaming our current inflationary environment on wanton government spending during the government imposed lock downs.

Today we introduce another paper issued by the San Fran Fed, this one authored by Treasury Secretary Janet Yellen, who was the Fed Governor in San Fran in 2005. In it, she describes “the wealth effect” a component in the Federal Reserve’s strategy for keeping the economy afloat.

The National Bureau of Economic Research (NBER) described the Fed policy like this: “The ‘wealth effect’ is the notion that when households become richer as a result of a rise in asset values, such as corporate stock prices or home values, they spend more and stimulate the broader economy.”

Does it work? Depends on your point of view.

Wolf Richter, from whom we borrowed the chart below, describes it as “the greatest economic injustice committed in recent US history.”

In introducing his Wealth Effect Monitor, Richter points out that “since March 2020, the Fed printed $4.9 trillion and repressed short-term interest rates to near-zero in order to inflate asset prices so that the asset holders would get immensely more wealthy, in line with its doctrine of the Wealth Effect.” 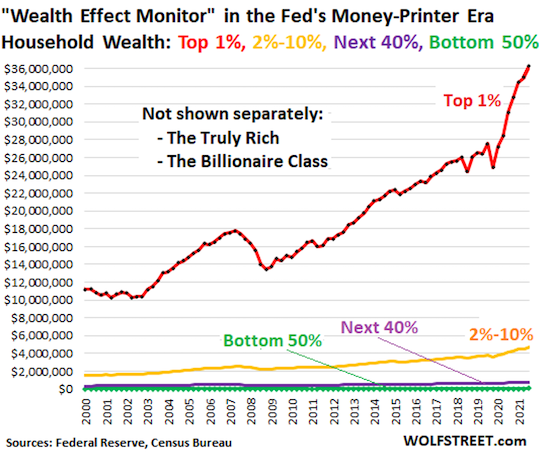 Yesterday, Wolf updated his monitor. The average wealth (assets minus debts) per household, defined by the Census bureau by category in Q4, 2021:

Looking at the chart, following along with their “wealth effect” strategy, the Fed helped “the wealthy got immensely wealthier. Everyone else paid for it via rampant inflation.” In an attempt to salvage their academic experiment in financial cosmetics, they heaped nothing but adversity on over 92% of the population. (We encourage you to take a deeper look at Wolf’s “Wealth Effect Monitor”, here.)

Janet Yellen’s explanation of the Wealth Effect came prior to the massive bailouts in 2008. Jeffrey Tucker explains in Friday’s Daily Prophecy, the difference between those bailouts to the same policy choices during the pandemic: “The state of denial dates back to 2008. Last time there was a huge crisis and the Fed unleashed monetary expansion on a dramatic scale, they observed continued downward pressure on prices. Then, the entire point of the policy was to re-capitalize the banking system. There was no macroeconomic agenda. The Fed wanted to save the system from collapse. The markets loved it.”

“The expansions of 2020 and 2021 were entirely different,” Tucker maintains, “Congress spent money it did not have. Trillions and trillions. That spending was debt financed. The Fed stepped up to buy the debt. The money was dropped directly into bank accounts of both business and consumers. It became very hot. The Fed felt it had no real choice. They pointed to Congress as the culprit.”

Now the Fed is between a rock and a hard place. If they try to “normalize” interest rates, our Wiggin Sessions guest this week Christopher Leonard suggests, the Fed could “nuke the entire economy.” Get Mr. Leonard’s full explanation, right here.