Thoughts From A Geopolitical Dojo

“Knowledge will give you power, but character respect.”

I thought I’d picked a tough row to hoe this week, tacking inflation as a result of monetary policy and Vladimir Putin’s motives for war.

Then, mid-week, I opened my copy of Marc Faber’s April Gloom, Boom and Doom report. It’s 46 pages long, which is a lot for a monthly newsletter. But, once I started I read the whole thing. If you know Dr. Doom’s work, you’ll recognize that’s a feat. He’s a beast – an archetype in our business!

To my honor, the first part of the newsletter tackles Russian motives for the invasion, the latter part ties it into among other things, monetary policy of the Federal Reserve. What follows is my attempt to connect these big ideas to the news cycle.

The San Fran Fed said it was government stimulus during the pandemic that led to current inflation… but kept mum on the zero interest rate policy the Federal Open Market Committee (FOMC) has been following. In April 2021, the Fed said that it was going to aim for “inflation moderately above 2 percent for some time” before raising interest rates.

The San Fran Fed researchers still laid their claim at the foot of fiscal policy, most notably in the Trump administration. Most of the commentary about their report came out over the weekend when folks were getting their grill on and thinking about the final four. They “used an index of real disposable income to untangle how much support was received by U.S. households versus other Organization for Economic Co-operation and Development (OECD) countries,” Bloomberg summarizes the salient points for the Fed study. “They found two distinct peaks in the U.S. corresponding to the CARES Act, signed into law in March 2020 at the onset of Covid-19 (Trump), and the American Rescue Plan Act a year later (Biden).”

The Wealth Effect And The 92%

Today we introduce another paper issued by the San Fran Fed, this one authored by Treasury Secretary Janet Yellen, who was the Fed Governor in San Fran in 2005. In it, she describes “the wealth effect” a component in the Federal Reserve’s strategy for keeping the economy afloat.

The National Bureau of Economic Research (NBER) described the Fed policy like this: “The ‘wealth effect’ is the notion that when households become richer as a result of a rise in asset values, such as corporate stock prices or home values, they spend more and stimulate the broader economy.”

Does it work? Depends on your point of view.

Wolf Richter, from whom we borrowed the chart below, describes it as “the greatest economic injustice committed in recent US history.”In introducing his Wealth Effect Monitor, Richter points out that “since March 2020, the Fed printed $4.9 trillion and repressed short-term interest rates to near-zero in order to inflate asset prices so that the asset holders would get immensely more wealthy, in line with its doctrine of the Wealth Effect.”

Mere “Normalization” of Interest Rates Would Nuke The Economy

That begs the question, as Faber puts it, can “the Fed possibly increase interest rates sufficiently to curb inflation without endangering the entire financial system?” The answer Marc Faber gives is a resounding “no.”

During our discussion with Christopher Leonard on the current Federal Reserve, the so-called “Powell Fed,” we talked about not just their impotence in the face of drastically rising consumer prices, but their inability to even sell the idea of bringing rates back to historically “normal” levels. “The most critical element of the Powell Fed,” Christopher says, “is that Jay Powell, when he became Chairman of the Federal Reserve, inherited a project from his predecessor, Janet Yellen, and in a way, her predecessor Ben Bernanke.” That is, he inherited the process of trying to quote, “normalize monetary policy”, after years of using low rates as a monetary elixir to save the banking system and then to prop up financial markets.

“The Fed in 2008, 2010, pushed down this very experimental path of keeping interest rates at zero,” says Leonard, “and then critically doing quantitative easing, which is just pumping trillions of dollars into the banking system.” Leonard continues: The entire time this is happening, it’s acknowledged within the Fed, within the top policy committee, the FOMC, that we can’t keep doing this forever…” 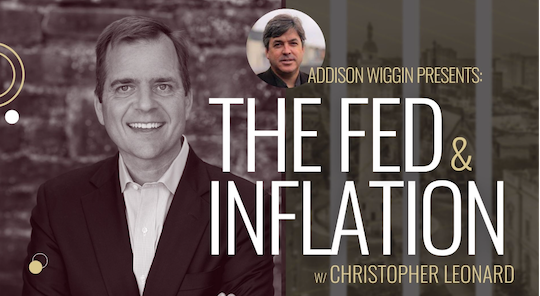 You can catch our full interview with Christopher Leonard, right here.

The Ruble and The Realpolitik

Until the invasion, Russian banks and economy were fully integrated into the Western system. Amid a storm of moral opprobrium and a host of international sanctions, the Russian ruble dropped to its lowest point since the financial crisis they endured in 1998. “The ruble has been reduced to ‘rubble’,” Joe Biden lauded. Not so fast, in response the Russians said “okay, if you want our natural gas, Europe, you’re going to have to pay us in rubles.”

Before you buy gas in rubles, you have to exchange your euros for them. That and the rate increase have boosted the ruble back to pre-invasion levels. “What’s become clear is that despite an incredibly wide-ranging package of sanctions on the Russian government and its oligarchs, and an exodus of foreign businesses,”

Bloomberg reports, “the actions are largely toothless if foreigners keep guzzling Russian oil and natural gas — supporting the ruble by stocking Putin’s coffers.” Germany for example sends €2.6 billion a month to Russia for oil and gas imports. Much of those energy supplies still flow through the Ukraine. Many of the Ukrainian oligarchs still have a vested interest in letting the supplies flow. Will the ruble rebound set Russia up for success in the “long-term,” as our Australian correspondent asks. 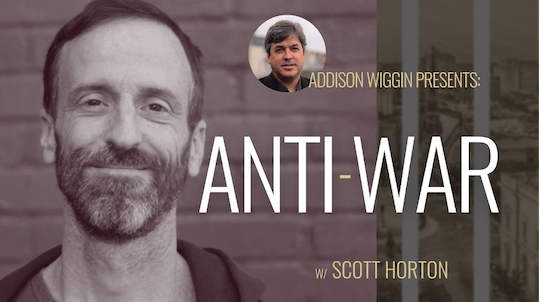 You can catch our full interview with Scott Horton, right here.

Two Cautionary Tales Rolled Into One

Mr. Horton proceeds to outline a litany of reasons the imperially ambitious Putin would want to counter Western aggression in a historical context, right here. That’s our first, cautionary tale: be careful what you say if your curiosity runs counter to the woke mob. To allay their concerns, we’ll discuss a more precise economic reason for the Russian invasion with commodities sage James West on Monday. It involves both the Russian “pullback” to the Donbas region and an estimated trillion+ cubic feet of natural gas somewhere underneath the Black Sea. Stay tuned.

P.S. “Jerome Powell has made a huge mess of things,” our friend and mentor Bill Bonner comments on the theme of the week. “A city slicker in the financial wilderness… with no compass to guide him, other than the Fed’s silly models and claptrap theories… he got hopelessly lost. And now he is caught… trapped, between the inflation he created… and the reckoning he was desperate to avoid.

Inflation has already returned to levels not seen since the 1970s. The Fed needs to stop printing; everybody says so.

“But if Powell fights inflation, the economy will collapse.