Top 5 Trends for 2023: Davos & the Plot to Seize Russia with Martin Armstrong 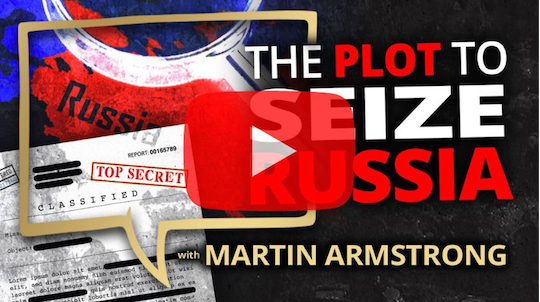 HOT TOPIC 2023: The interview we held with Martin Armstrong a couple of weeks ago “went viral” as my kids would say.

We were intrigued by his perspective that the armed, violent conflict over Ukraine is the first in a series of “climate change” wars. We don’t normally report statistics, but this one outranked all the Wiggin Sessions for the year in 2022. It was one of the last.

Dissecting the complex geopolitics of what Martin Armstrong calls “The Climate Change War”– or the War in Ukraine over resources and economic “domination.”

“Overthrowing Putin will only make things worse,” Armstrong claims, and the simple solution seems to go out the window.

In fact, many of the solutions brought forth by President Biden and his cabinet are undermining the world economy. That’s the reason Western financiers are nervous every time the United States threatens sanctions, or worse, nuclear warfare.

“They just look at what’s in front of their nose… not the whole picture,” Armstrong says, trying to make sense of things.

Martin, himself, leads the World Economic Conference – a gathering the polemic Nigel Farage calls “the antidote to Davos.”

The principal aim of the World Economic Conference: To fight back against the “control freak” Klaus Schwab and reinstate the ideals of laissez faire government and economics. To Armstrong and his crowd, Modern Monetary Theory is nothing but a set of antiquated ideals from the 19th century. They claim the collapse of globalist, Keynesian politics is coming to fruition.

“The War in Ukraine is just a skirmish in the bigger picture,” he claims.

You can watch the full Episode 86 with Martin Armstrong here.

P.S. Bombardment, air raid sirens marked Ukraine’s start to 2023, as Russia continued intense attacks on Kyiv and other parts of Ukraine early on New Year’s Day. A sign of the times? A signal that in the year 2023 there will be no let up on the global front?