“The whole history of the world is summed up in the fact that when nations are strong they are not always just, and when they wish to be just, they are often no longer strong.”

We left off yesterday asking a simple question: why are Western companies banning the shipment of Nikes, Big Macs and Legos to Russia, when Ukrainian energy companies are still making billions from “transport fees” as Russian gas passes through the countries’ pipelines?

Our Daily Proof phrases the question in another way:

The mainstream narrative has been so dialed-in on the atrocities of the war… and the efforts of celebrities to raise money for Ukrainian refugee relief… the root cause of the war is only now gaining some ink. “Russia’s Gazprom continues gas exports to Europe via Ukraine,” says Reuters. “Ukraine’s pipelines are still carrying Russian gas to Europe,” says a more expansive piece in the Washington Post. “Ukraine Demands Everyone Else Boycott Russia While Making Billions From Russian Gas,” reads the Front Page Magazine.

Seems like a revelation. Injustice. A travesty. Oh, how the Enlightened Elite Establishment (EEE) must be enraged.

Or are they? It is rather entertaining, we have to admit, watching them funambulate their way around “moral outrage” and the reality of the global energy and food markets.

“Despite mainstream financial media’s portrayal of the war as a geopolitical phenomenon,” comments James West, our Wiggin Sessions guest, “where Vladimir Putin is trying to reunite Russian Federation from before the wall came down, this is completely erroneous and false and fails to look at the real issue.”

Ukraine has over two trillion cubic feet of natural gas reserves offshore. And if they were to bring those reserves online, it would completely destroy Russia’s monopoly on natural gas supply to Europe. Russia relies on energy exports for 40% of its trade. And so that is the main thing that is making Vladimir Putin say, “At all costs, I cannot afford to let Ukraine bring those two trillion cubic feet of natural gas on stream.”

The charts of Ukrainian natural gas routes have been swirling the conflict since Russia annexed the Crimean Peninsula in 2014: 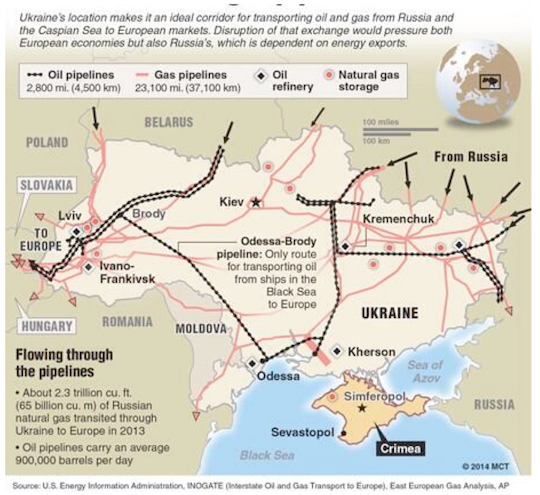 “This war is not about Russia and Ukraine,” West contends. “This war is about control over the energy markets in Europe. It is as much a West versus East scenario and It should be obvious to everyone.”

One supposes history will out the players on both sides of the conflict. The Ukrainian oligarchs continue to get paid while the Russians reconcentrate their troops in the Donbas with a new more fearsome general.

“Joe Biden’s son Hunter Biden was on the board of Burisma,” West points out. “Burisma is the Ukrainian company that controls all of the energy assets in Ukraine. So there was a process in place for American investment into Ukrainian energy production.”

That conduit for American investment is precisely what the Russian army appears to be focussing its attention on right now: control the Eastern part of Ukraine and Black Sea ports like Odessa and Sevastopol and you control the Ukrainian flow of gas.

If you’re following along in other political venues Hunter Biden’s laptop has been a hot potato involving other incriminating details that is not the purview of this piece. Rather, we’re more interested in the real impact of war on energy and food prices. And on the inflationary trend in commodities they are exacerbating.

What effect has the war over natural gas had on the commodity price index? The price you pay for everything from gas, to bread and cheetos is going up. The inflationary psychosis is about to get real. And as we detailed ad nauseam last week, the Fed is effectively out of creative ways to combat it.

“Russia is the largest exporter of wheat in the world,” James West contends. “We’ve seen the price of wheat skyrocket, but wheat only plays only a small contribution to the overall price action in the CRB index. Russia’s a big exporter of oil and gas. Forty percent of its exports are energy. And so that’s had an effect on the price of oil and gas.”

Check out James’ full review of commodities in Global Commodities In A Time of War, Broken Supply Chains and Epic Inflation… including copper, lithium, gold and silver… right here.

P.S. The former head of Naftogaz, the state-owned Ukrainian energy company, has told members of the U.S. Senate that “Putin believes the Russian energy supply is so important to the West,” writes Daniel Greenfield in Front Page, “that they’ll always be forgiven. Western countries will crawl back on their knees asking for Russian oil and gas.”

We’ll have more from James West tomorrow… or click on the image above for our full discussion on commodities, inflation, oil and gas, the war and more.