Wait, Am I An Anarchist?

“The difference is that some look beyond the immediate – what is seen – and ask: ‘And then, what will happen’? – looking for the unseen.”

We’ve had this experience more than once in our career. Pathos.

Here’s what happens. We agree with a premise in a debate. A critique of money printing. A disagreement with government policy. An opinion the SEC or FTC might be wrong about something.

There are a number of things we take umbrage with in these pages.

Premise established with a guest… seems like we’re getting along fine. Then, oy, the solution I’m being prescribed is more government.

That happened this week on the Wiggin Sessions with Peter Goodman. Let’s be very clear. I like Peter. I enjoyed our conversation. I liked reading his book. It’s worth your time to read, also.

Mr. Goodman is the global economics editor for the New York Times and has a book out now called Davos Man: How Billionaires Devoured the World.

As you know, we’ve been writing about the Davos Crowd for some time with gentlemen like Jim Rickards.

Peter Goodman agreed to talk to us, too. But like talking to or reading someone like Paul Krugman or Dean Baker, we agree on the critique. We don’t agree on the solution.

For reference, Davos is where the World Economic Forum is hosted by Klaus Schwab, who’s been tagged in social media with the highly unfortunate quote “you’ll own nothing by 2030 and you’ll be happy about it.” It’s fairly clear he has never said that phrase exactly, but still it captures the sentiment around him.

In his book, Peter Goodman includes a cast of world-devouring characters including Jami Dimon, Stephen Schwarzman, Larry Fink, Jeff Bezos and Marc Benioff. These billionaires have a lot of money, power, and influence, yada, yada, yada.

“Where it gets controversial is when we get into healthcare,” laments Goodman. If it’s not bad enough to engage with the climate change debate last week with John Englander, this week we’re taking on healthcare and education.

We keep investing in scope, but these are themes that are mutating even mutilating the investing landscape.

“Healthcare is so politicized,” Goodman says, “And yet ‘the polls’ show pretty clearly, most Americans want some form of a single payer healthcare system.” A single payer system is one run completely by the Government.

Which will mean more taxes.

Do the majority of Americans really want that? 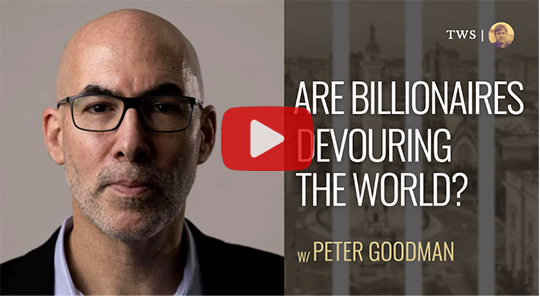 Peter Goodman, gentleman and author, lays out an argument government regulation of billionaires

According to Peter in his very readable book, billionaires like Musk, Bezos, Gates have too much money and power are pillaging the planet, with governments in tow.

This is where our conversation goes awry.

Peter supports a wealth tax to transfer Davos’ men’s money to the government. They can then spend on better roads, airports, education and healthcare. The government can tackle climate change.

“If you’re Steve Schwartzman and you’re invested in healthcare,” contends Peter, “you want hospital rooms full. You want people confused about who’s paying for what so they’re just signing on the dotted line to get care.”

Government would be better at allocating resources than entrepreneurs.

You’ll see when I balked at Peter’s suggestion the government needs to get involved and regulate these guys, he asked:

I’ve never asked that question of myself. Although, I did read a bit of Bakunin and Kropoktin in an anarchist reading group during graduate school in Santa Fe.

Back to the topic. What about simple freedom of choice? Money that you can understand? Interest rates and inflation that remain stable enough to plan? What about your future and getting the things you and your family need?

If we just focus on health care for a minute. I turn to my producer Jud Anglin on free market healthcare. It’s not even a thing really in the U.S. especially since the Affordable Care Act, written by insurance company attorneys and advocates, passed through Congress on March 23, 2010.

Jud arrived in my office in 2014 to write about free market healthcare solutions that the government doesn’t want you to know about. It’s a given that the Davos crowd doesn’t care.

He founded MedRetreat, LLC, the first US-based medical tourism agency in 2003 to promote and facilitate surgery abroad where the cost of procedures were a fraction of the cost in the US. Over the years he discovered free market healthcare solutions in the US and began promoting them.

Have a hernia without insurance or extremely high deductible? The average cost at your local hospital will run you approximately $20,000. “Or you can just fly to Washington, DC and have it done for $2,400 at Affordable Hernia Surgery in Rockville, Maryland, ” says Jud.

But that’s just for a hernia repair. What about a low cost hip replacement? “That’s easy,” informs Jud. Fly to Oklahoma City and have it conducted at the Surgical Center of Oklahoma. It’s a 100% free market hospital. They don’t even take insurance.

P.S. Jud’s favorite free market solution Health City Cayman Islands Hospital in Grand Cayman. This low-cost hospital was opened in 2014 by Dr. Devi Shetty. Dr. Shetty is wildy famous in India for his low cost innovation in healthcare. He is known as the Henry Ford of heart surgery.

The free-marketers and innovators in healthcare have been working tirelessly to gain a foothold in the US. What’s the obstacle?