Wealth Is Knowledge, Growth Is Learning

“If knowledge is power, we should look to its advancement at home, where no resource of power will be unwanting.”

It sometimes feels like capitalism in America is broken — with politicians, banks and billionaire entrepreneurs doing everything they can to keep the odds stacked in their favor.

But if George Gilder is right, part of the problem is that we’re viewing the system all wrong.

A nation’s wealth isn’t defined by the number of factories it has, its acres of farmlands or even how much natural resources it has underground. It’s measured by having the knowledge required to use those assets.

Likewise, growth isn’t just a matter of building things better, faster and cheaper — but the research and learning that makes those improvements possible.

And money isn’t power or an end goal. It’s a measuring stick that represents the amount of time we spend on our endeavors.

It’s a fascinating concept, and one that isn’t easily parried. I’m very excited about George’s upcoming book on the subject.

In the meantime, here’s a look at everything we talked about this week.

A Dispatch From Covid Country

COVID-19 is making a comeback as infection rates spike all over the globe. And that resurgence is spooking Wall Street, with the major indexes down sharply. Are investors afraid Congress and the Federal Reserve will stop issuing new stimmies? Or are they realizing that conjuring cash out of thin air can’t solve everything? Maybe they’re starting to think all those free handouts aren’t a substitute for real industrial growth. But to George Gilder, something even more systemic is at work. And if you understand what’s happening, you can turn the situation to your advantage.

The package was from Bill Bonner. The book inside had a black, wordless cover. It turned out to be a copy of A Modest Theory of Civilization: Win-Win or Lose, Bill’s latest opus fresh off the press. Bill had told me that he didn’t want to release it. So I assumed that’s why it arrived without any sort of dust jacket. And recently, I was talking to George about how he stays on top of the latest trends. He said he was a voracious reader, then held up a copy of Bill’s book — complete with a cover. What the heck?

The Heart of Capitalism

After returning to Earth yesterday, billionaire space tourist Jeff Bezos thanked Amazon.com customers and employees for helping fund his flight. It’s fair to ask whether fulfilling Bezos’ astronaut fantasies was a good use of Amazon’s cash receipts. George would probably argue that it was. “Creativity is the heart of capitalism,” he tells me. He cautions, however, that the quest for breakthroughs is leading some entrepreneurs to have the same misconception about wealth that Karl Marx had.

The Real Reason Why Gold Is Standing Still

Gold prices continue to meander in a tight range, despite a long list of reasons they should be trending higher. By all rights, it should be above $2,000 an ounce, not stuck around $1,800. But George Gilder has a theory about why precious metals haven’t moved much… and it ties directly into his idea of time-prices. It starts with a simple premise — that “money is a measuring stick, just like the second, the meter, the kilogram, the ampere, the lumen.” All of those official units of measurement are “ultimately rooted in the speed of light,” George says. He argues that money should be, too.

A company called Bitcoin Depot has announced a partnership to provide Bitcoin ATMs to Circle K convenience stores. Kiosks have already been installed in 700 locations, with 6,000 expected to be in place by the end of the year. Jim Rickards has argued that one reason Bitcoin can’t expropriate the dollar’s supremacy is because it lacks utility. You can’t just spend cryptocurrencies… you must go through the hassle of converting them into an acceptable form of payment. So far, Bitcoin ATMs don’t do anything to overcome that hurdle. But George Gilder says Bitcoin has an even bigger problem… 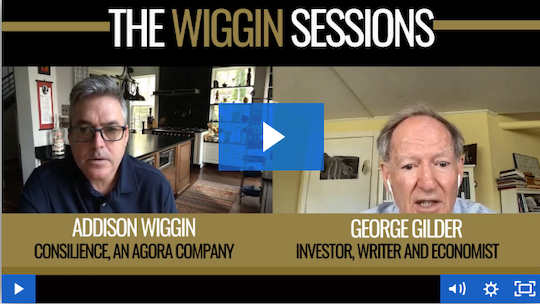 You can catch our full interview with George Gilder right here.

George’s book will be called Life After Capitalism. I plan to catch up with him after it’s released.

For a sneak peek of what it’s all about, click on the picture above to hear our whole conversation.

P.S. From one tech analyst to another. Starting next week, you’ll get to hear my talk with Ray Blanco. There’s no shortage of things to discuss — the billionaire space race, covid and more. He even names some of his favorite companies right now.

We’ll kick everything off on Monday.