It’s a fitting question while bankers and traders hold their breath ahead of Fed chairman Mao’s… wait, Powell… gives his comments at the Jackson Hole Economic Policy Symposium tomorrow.

Recall, we talked to Mark Moss and Aleks Svetski about the economy, and capitalism itself, being an organic and evolutionary process. The wealth and prosperity of a given country or people is a feature of their creativity and output; their ideas and dreams.

Prosperity is not arrived at by the stroke of pen – by fiat, decree or regulation. Wealth is not created by setting interest rate policy.

Doug continues his briefing in earnest:

Second, these people are idiots. Everything that they’ve been doing for a long time, it’s not just the wrong thing, it’s the exact opposite of the right thing. But you don’t care about these ruminations. What you want to know about is what I’m doing with my money now.

Doug’s view of our situation: No matter what we say or do, the folks who are in charge of the economy – and, frankly, the world banking system – are making decisions beyond anything the individual investor can control.

What’s new though? We have known this… the things we can control: the educated allocation of our own resources, including time and money.

Here’s what Doug is doing with his money:

I’m bullish on gold, although gold at the moment, $1750/oz, is reasonably priced relative to just about everything else. But I’m bullish on gold, but as a savings vehicle, not as a speculative vehicle. I’m very, very bullish on gold stocks, producing mines more than exploration or God forbid or even development mines. Because industry wide all-in sustaining costs are a thousand bucks an ounce.

Let me add a fourth; uranium, which is the safest, cheapest and cleanest form of mass power generation. And we’re going to have serious power upsets throughout the Western world in the years to come, starting this winter.

Mr. Casey is in full hedge mode, buckling up for what he calls “The Greater Depression” kicked off by, among other crises, a serious policy-driven energy crisis.

Policy wizards are overwhelming the grid. Here’s a smattering of details from a 5 minute Google search this morning:

* Annalena Baerbock, Germany’s Green Party foreign minister, and a member of the Davos Crowd, supports Germany’s ban on nuclear power following the Fukushima meltdown in Japan in 2011. Baerbock also wants to get tough with Russia, nat gas or no. The pervasive question among bystanders like me: how will Germany heat its way through Northern European winters?

* In California, Governor Gavin Newsome has been supporting a ban on natural gas in new homes, condos, apartment and office buildings. Turns out the state can’t ban natural gas, per se, so they’ve turned to policies that make it cost prohibitive.

What alternatives are planned? 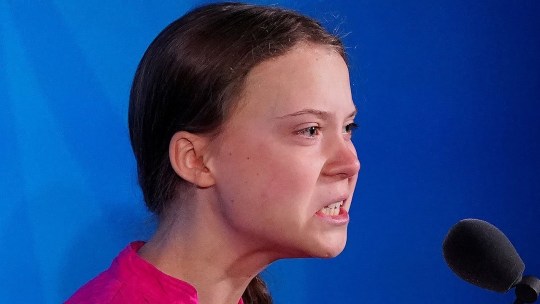 How proud her parents must be… (source: The Telegraph)

Or, as Sky News Australia’s Andrew Bolt puts it; “A mere child, full of rage, obsessed with doom, totally devoid of any practical solutions – but here she is lecturing the world on how to fuel their 21st century economies.”

The climate crisis is what it is. Es lo que es.

We ourselves just returned home from a 10 day excursion to Greenland to understand the science behind studying the ice shelf there and the rapidly melting glaciers.

“Even if we cut CO2 and Methane emissions to zero tomorrow,” John Englander, our leader on the trip maintains, “we’d still have a warming issue. The degree and half of rising heat is already in the ocean. And will continue to melt the glaciers for decades.”

There are many factors. You don’t need to write in to tell me about climate issues. I’m studying it on my own and will be writing about it once I get a clue.

Until then, what’s troubling is the public and political spectacle being foisted on the rest of us by a cadre of world-improvers…. and its concomitant impact on the financial markets… including, but not limited to, energy.