Why Socialism Is Good For Gold

“To expect the unexpected shows a thoroughly modern intellect.”

2022 was the fifth-warmest year on record. It also had the third most billion-dollar disasters, according to scientists at the Copernicus Climate Change Service, with Europe clocking in its hottest summer ever recorded, and California sustaining a historic drought, followed by a bomb cyclone last week which pummeled the “Pacific Northwest.”

Perhaps this spells the end of the Mediterranean diet. Or the ushering in of a new green politique, one charged with emotional suggestion, but a Trojan horse nonetheless. 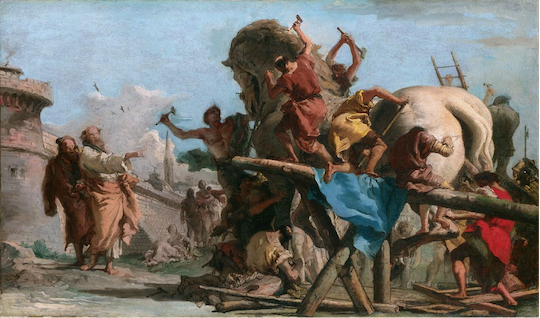 The Building of the Trojan Horse, Giovanni Domenico Tiepolo, 1760, oil on canvas. (Source: The National Gallery)

A year of global highs and lows! Translation: “The middle of the road leads to socialism,” like the Ludwig von Mises book title goes.

The Inflation Reduction Act, for example, did anything but reduce inflation. In fact, if you read the fine print, up to $1 billion were granted for loans for renewable energy infrastructure, $2.025 billion for the RBCS Rural Energy for America Program (REAP), with $303 million set aside for underutilized technologies and technical assistance. The act also provides funding to the Environmental Protection Agency (EPA) to establish a greenhouse gas reduction fund and to “support several programs that provide financial incentives to reduce greenhouse gas emissions and other air pollution emissions.”

Meanwhile the White House website proclaims “the Inflation Act will achieve hundreds of billions in deficit reduction,” and you wonder if we are reading the same bill at all.

Bill Bonner put it a better way in his latest missive:

Fish gotta swim. Birds gotta fly. And late, degenerate empires gotta get out of the way to make room for the next act. How? In the usual ways – inflation, war, corruption, and delusion. Together, they will destroy the wealth, power and prestige of the United States of America and its citizens.

The equation remains the same as it always has. More socialism means more government debt, which is bad for any currency. And with crypto looking like it’s either going to get regulated or considered a commodity, the historic alternative to a declining dollar is gold and other precious metals.

The House GOP’s first policy bill out of the gate didn’t address gas prices or immigration, but instead went after the Internal Revenue Service (IRS).

The bill was passed Monday evening on a straight party line vote of 221 to 210 to reverse much of the $80 billion in extra funding set aside for the agency by– you guessed it– the Inflation Reduction Act.

The enhanced funding for the IRS is “part of the broad Biden administration strategy to tax and audit exponentially more Americans,” said Republican representative Adrian Smith. He added that the new House bill would throw a wrench in “autopilot funding for an out-of-control government agency that is perhaps most in need of reform.”

“The U.S. may finally breach the debt ceiling,” the New York Times reads this morning. “If Congress fails to increase the government’s borrowing limit in time, the result would be a shock to the economy and financial markets.” Maybe it’s just that time of the year again.

Maybe, just maybe, writes Matt Piepenburg of Matterhorn Asset Management (with whom we have a long-time and ever-developing relationship), “the impact such distortions impose on global markets is finally revealing multiple symptoms of growing desperation behind the scenes of our so-called financial leaders and their broken currency and inflation models.” He continues:

Of course, all these distortions and imploding markets (property, credit, equity and cash) point naturally toward an exploding gold price, one that can’t be measured in dying currencies but immortal ounces, grams and kilos.

As Eastern banks and nations turn increasingly toward physical gold, the misdirected West seems history-blind as the slow move away from the USD and UST continues its undeniable trend.

Tom Dyson, investment director at Bonner Private Research, calls the promise of gold a “knocking.” The knocks are “a series of distributions from weak hands to strong hands,” he writes. He continues:

When I see a chat knocking on the resistance level like this, I know it will eventually break through and go higher. Will this be the time it breaks through for good? Or will it just price out more ounces onto the market and move them from weak hands into strong hands in another distribution? 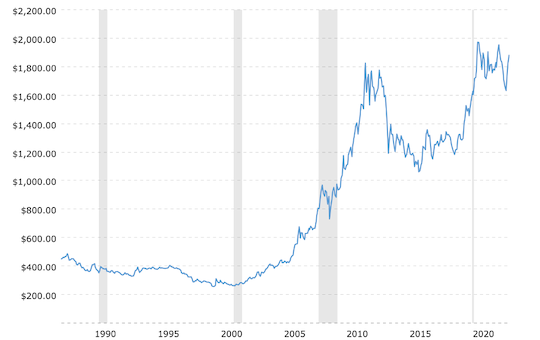 Gold prices since 1985. Notice the “knocking” in the upper right?
(Source: MacroTrends.com)

“I have no idea if the gold price will explode per se,” Dyson concludes humbly. “I can say this though. I’m one of the strong hands. I couldn’t even sell my gold if I wanted to. Encased in cement and sitting at the bottom of a lake is how I like to store my gold. The real question is: should we be buying more?”

In the end our blessed socialism is lined in silver and gold, as debt devalues the dollar and intelligent investors flee from volatility in search of something solid, something sturdy. Something with historical validity and purpose.

What do you think? Is socialism good for gold? You can write to me here.

P.S. While most of the media scoffs at the Kevin McCarthy debacle, some conservatives see it as a win. “There was a lot of frustration with the prolonged and unnecessary food fighter that we had this week,” said Nancy Mace, the Republican representative from South Carolina. “But you saw democracy on full display.”