“I ain’t no communist necessarily, but I been in the red all my life.”

Sacco and Vanzetti are rolling in their graves.

Never in a million years would they have imagined the strength of the Federal Reserve in dictating the lives and liberties of the American people and their jobs.

And yet we listen – and cringe – as “the Growth Recession” is slowly but surely realized with every coming Powell interest rate hike.

“We think it’s necessary to have a growth slowdown,” preaches the Chairman. He continues:

Growth is going to be slowing down this year for a couple of reasons. One of which is that we’re coming off of the very high growth of the reopening year of 2021.

You’re also seeing tighter monetary policy. We actually think we need a period of growth below potential, in order to create some slack so that the supply side can catch up.

As Jim Rickards kindly explained in our latest Wiggin Session, much of the inflation in the system right now is the result of the government lockdowns and subsequent supply chain issues.

The Fed is a bank. It doesn’t drill, ship or refine oil. It can’t unload Samsung TVs from cargo barges off the coast of Long Beach. It can’t drive a truck full of oranges from Central Florida to a Wegmans in King of Prussia, PA.

What the Fed can do is crush the consumer’s spirit… and try to dampen the demand for gas, flat screens and morning meditation smoothies.

Kill the demand. Supply will catch up, eventually.

The unfortunate and very real side effect rears its fugly head in Powell’s next statement:

We also think that there will be, in all likelihood, some softening in labor market conditions. And those are things that we expect, and we think that they’re probably necessary if we were to have– to get inflation.

The Fed’s original mandate from the 1913 Federal Act was “price stability.” In 1978, the Full Employment and Balanced Growth Act, better known as the Humphry-Hawkins Act, allowed the Fed mandate to include “full employment.”

Every Fed Chair since Arthur Burns has considered employment as part of their dominion. With Powell’s mutterings about “creating some slack” in the system, he has effectively jettisoned the full employment mandate of 1978.

When the “barbarians of specialization” locked down the economy during the Pandemic, millions of Americans simply quit their jobs. The result: Despite two… maybe three… quarters of negative growth, the National Bureau of Economic Research (NBER) hasn’t officially declared a recession. One reason is the massive number of “Help Wanted” signs still hanging on storefronts across the country. 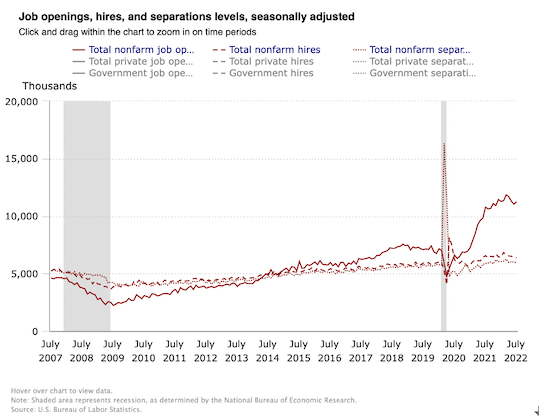 The sharp uptick on the right is “The Great Resignation” of 2020. (Source: Bureau of Labor Statistics)

What makes this “recession” different?

If the Fed keeps raising rates, as Goldman and others of their ilk expect, those job openings will magically dissipate. Rising rates will knock out zombie businesses, zombie households, zombie college students… and inject the debt-virus into small businesses.

Borrowing to expand or make payroll is easy when rates are low to negative.

Expect a “soft labor market,” Powell sweet talks…it’s exactly what he wants! When you’re rich and, ahem, powerful, you don’t worry about this kind of thing.

But if you ain’t, well… it matters a lot.

You’re less likely to finance that new Hyundai Iconiq 5 if you’re not sure you’ll even have a job in the next few months. This winter is going to be rough.

P.S. Another unintended consequence of an extended recession… “labor” gets busy. 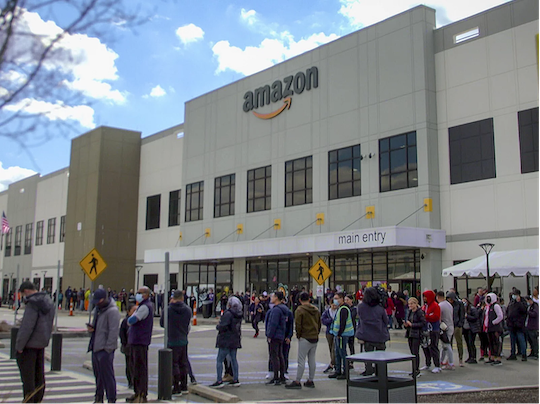 Workers line up to vote on unionization at Amazon’s warehouse in Staten Island. (Source: Associated Press)

“We, as workers,” brays Chris Smalls, man on the street in New York, “the working class, we got to realize our value. If we don’t go to work, these CEOs don’t make their money. So if workers can realize that no matter where you work in this country, what you’re doing, then you will realize that you can form something that can collectively bargain.”