“I am a bit surprised,” a reader writes, “that the TPP treaty (Trans-Pacific Partnership) has slipped under your radar. This is huge by anyone’s definition.”

One element of the Trans-Pacific Partnership we’ve already drawn attention to, even if we didn’t identify the TPP by name: the ease with which its signatory governments could impose capital controls on their people: 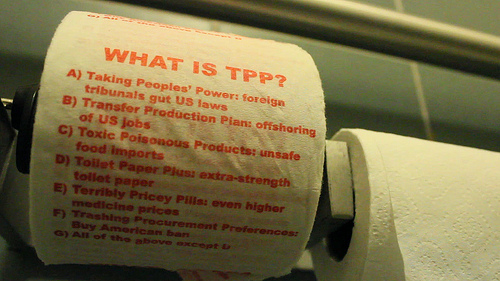 TPP TP…
(Image credit: Flickr user TX Corporate Power Partnership)
Let’s begin at the beginning: “The Trans-Pacific Partnership (TPP) may soon be an acronym as recognizable as NAFTA,” says a story this week from Canada’s CBC.

On one level, the TPP is the latest in a long line of so-called “free trade” deals that are anything but.

A real free-trade agreement could be written on half a page. “Country X drops all its stupid tariffs and import duties on goods from Country Y. Country Y does vice versa. The end.”

In the current day and age, “free trade” entails hundreds of pages of dense text and footnotes with which politicians can reward their friends and punish their enemies.

The TPP began in 2005 as a four-nation trade bloc involving New Zealand, Chile, Singapore and Brunei. By 2008, the U.S. government decided it wanted a piece of the action… along with Australia, Peru, Vietnam and Malaysia.

Two days ago at the G-20 summit in Los Cabos, Canada and Mexico were invited to take part. Such a move “will be a way of upgrading the NAFTA without having to renegotiate it in North America,” says Jeffrey Schott, a senior fellow at the Peterson Institute.

TPP is not a done deal; indeed, it’s the subject of endless negotiations in which lawyers and bureaucrats get together at great expense in warm, sunny locales to negotiate the fine details in secret… and party like a Secret Service agent, no doubt.

The most-recent round was in Dallas last month, where protesters who had a problem with all that secrecy snuck into the hotel and swapped out the existing toilet paper with the stuff in the picture above.

The next round starts a week from Monday in San Diego. Tough duty…

TPP, among other things, is a backdoor means to enact the odious Stop Online Piracy Act, or SOPA.

Before a flood of protest stopped it cold in Congress, SOPA would have given the U.S. government the authority to erase websites from the Internet without due process of law if they ran afoul of the bill’s copyright provisions — which were ridiculously easy to violate.

A leaked draft of the U.S. proposal for TPP is just as draconian, involving “civil penalties for copyright infringement that could lead to a $150,000 penalty for a [single] instance,” says Maira Sutton of the Electronic Frontier Foundation. “It could also lead to jail time for infringement if someone were found to directly or indirectly benefit from an infringement.”

Like NAFTA, TPP brings together left and right in opposition. Especially after the leak of additional details last week.

“As part of its membership in the TPP,” says a summary from the John Birch Society’s New American, “the United States would agree to exempt foreign corporations from our laws and regulations, placing the resolution of any disputes… in the hands of an international arbitration tribunal overseen by the secretary-general of the United Nations.”

“We’re talking about… giving up sovereignty over key domestic laws and regulations to foreign multinationals,” adds David Dayen of the lively leftist blog FireDogLake. “That would be true for foreign companies in the U.S. and domestic companies in the eight Pacific nations engaged in the trade pact.”

As the reader said at the start of today’s issue, it’s “huge.” So where’s the Tea Party? Where’s the Occupy movement?

As we’ve pointed out before — always to the consternation of at least a few readers — there’s considerable overlap between the two groups. Addison posted this on his Facebook page:

“The movement’s survival and continued relevance is far from assured,” says a recent Reuters analysis of the Occupy movement. Occupy, “by most indications, lacks the energy it once had,” adds The Washington Post’s Dana Milbank.

The Tea Party? It’s been subsumed into the dreary world of electoral politics. One of the major groups, FreedomWorks, has unveiled a “‘triple dip’ strategy of focusing on states that will be critical in winning the White House, increasing the Republican majority in the House and flipping control of the Senate into GOP hands,” CNN reports.

NAFTA came into being 20 years ago with bipartisan support, easily overcoming opposition from “the fringe.” TPP is likely to meet with the same destiny. All you can do about it is take matters in your own hands… legally… while you still can.

The capital controls allowed by TPP could put the kibosh on plans you might have to diversify your wealth outside the U.S. dollar. Or Congress and the White House could enact those limits on their own, bypassing TPP.

We don’t know how it will play out… but we do know time is running short to act. Please review this rundown of wealth-preservation methods — while they’re still legal.

Traders are coping this morning with post-Fed letdown.

As noted yesterday at virtual press time, Santa Ben Bernanke did not deliver the sack full of quantitative-easing toys for which The Street hoped. (Good call by our resident technician, Jonas Elmerraji.)

But neither did he leave a lump of coal that would have instantly tanked the Dow 250 points. Instead, he left a small stocking with plastic trinkets in the form of Operation Twist extended to year-end.

Result? “Q1 looked much better than it should have… Q2 ended up looking much worse. Average them together, and you get a mediocre (but nonrecessionary) 1.5-2.5% first-half GDP.

“We are not in a recession, but we cannot rule one out over the next 18 months. And while our growth is mediocre, it is certainly better than the contraction of Europe.”

This morning, a flurry of numbers is coming in to confirm that view:

The mediocrity of the economic numbers is playing out in today’s market action:

Looking for a bull market these days? Try lithium.

“Prices for the conductive metal,” reports Bloomberg, “have tripled since 2000 in a market now worth $1 billion a year as uses expand in vehicles, ceramics, electronics and lubricants.”

Lithium is essential to the demand for batteries in everything from iPads to hybrid cars.
Analysts at the firm Dahlman Rose expect lithium demand to double by 2020.

If true, that will raise the demand for another substance even more. “The lithium battery uses up to 10% more graphite than lithium,” the CEO of a small miner recently told Byron King.

The lithium-ion battery in your mobile phone? You might as well call it a “graphite battery.” The same substance in the No. 2 pencil of your childhood.

Batteries are only the beginning of the exploding demand for graphite. There’s also graphene, a variation on graphite that’s only a single atom thick… but is strong enough to “support the weight of a truck bearing down on a pencil point,” as The New York Times put it. Graphene also has the potential to replace silicon in the next wave of computer chips.

“Graphite prices have more than doubled in recent years,” says Byron… who’s on the trail of two graphite-mining plays. He’ll lay out the considerable investment opportunity on Monday afternoon, during a conference call with three CEOs and resource-investing veterans Sheldon Inwentash and Rick Rule.

Graphite won’t be the only thing on the agenda: The experts will cover two more high-tech metals: vanadium and beryllium.

These are the sorts of opportunities you won’t read about at Bloomberg. But you can listen in to the call on Monday at 3 p.m. EDT… or a recording of the call any time after that. To make sure you have access, follow this link.

To our now yearlong chronicle of “new taxes and weird fees” we tack on perhaps the most outrageous entry yet.

First, a bit of background: To cross the George Washington Bridge between the Bronx and New Jersey, you pay the Port Authority a toll of $9.50… even more if you don’t have an E-ZPass. But if you have a carpool of three or more people, you save $6.

“That’s a decent-sized savings,” writes Mike Masnick at TechCrunch, “so people have set up an informal sort of ride-share, in that those who want to get across will wait at a nearby bus station, and drivers will swing by and pick them up for the ride. The riders get a free trip across the bridge… and the driver gets a lower toll. Win-win.”

Naturally, the Port Authority dislikes the arrangement… and has taken to ticketing drivers who engage in the practice. The problem is they’re not violating the law. Economist Kudret Topyan spent six hours in traffic court making that case… and won. “The prosecutor was jumping up and down in disbelief,” he told The Wall Street Journal.

Now the Port Authority police have taken to simply hanging around the bus station. Their mere presence is often enough to intimidate drivers into paying the full toll… and their potential passengers into hoofing it across the 1.5-mile span.

Walking, at least, is still free. For now…

“If Operation Twist was a success,” a reader muses, “why does it need to be extended? If it wasn’t a success, why extend it?”

“When quantitative easing continues, the Fed will disguise it by changing its name. I anticipate Operation Twist to be followed by Operation Shout.”

“Concerning ideas for rubber stamps on money,” a Reserve member writes in…

“With a tip of the hat to the warning on car side mirrors,” he suggests…

Other random suggestions that rolled in include…

“You failed to mention which direction the Italian man was headed,” a reader writes about the man arrested for smuggling $2.5 million in gold: “From Switzerland to Italy or from Italy to Switzerland?”

“I’m awaiting your answer to complete the story.”

The 5: We’re waiting with you.

It’s tempting to assume he was going from Italy into Switzerland, and this editor did just that in yesterday’s rough draft… until a careful proofreader stepped in and pointed out the Reuters story merely left that to the reader’s imagination.

Sloppy journalism… Alas, it’s the only account we’ve run across.

“It was Italian police who stopped him,” the proofreader reminds us, “and in my experience (heh), it’s normally the police of the country you’re entering who stop you.”

P.S. The general sell-off today is picking up pace. The Spanish government says it needs another $64-78 billion to shore up its banks.

Wait a minute, you’re thinking, weren’t the Spanish banks bailed out less than two weeks ago? Yes, they were!

Abe Cofnas’ mock trade of the week is turning into a nail-biter. Recall, he’s counting on the Dow to end the week higher than 12,775… or lower than 12,575. We’ll be keeping tabs tomorrow…