About an hour after the market closes today, the Earth will have a close encounter with an asteroid 1.7 miles wide. The asteroid’s name: QE2.

Who’d have guessed? The inscrutable naming conventions of astronomers back in 1998 — when they first spotted the thing — anticipating one of the most irritating financial buzzwords a decade and a half later.

True, QE2 — the policy — was already history in the summer of 2011. We’re already onto QE4, or QEternity, or whatever.

And “close encounter” is a relative term: 3.6 million miles is as close as QE2 — the asteroid — will gets at 4:59 p.m. EDT, and that’s 15 times the distance between Earth and the moon.

If only QE2 — the policy — and its offspring were as inconsequential…

“My greatest concern,” says Sprott Asset Management’s John Embry, “is that the dollar at some point in the not-too-distant future may lose its role as the reserve currency of the world.”

Mr. Embry’s interview with ETF Daily News comes at the same time as we learn the greenback commands 62% of the $6 trillion in foreign exchange reserves held by the world’s central banks.

That’s the lowest percentage in 15 years, reckons the International Monetary Fund. All those “bilateral” currency agreements — China and Russia, Russia and Iran, China and Venezuela — are adding up to death by a thousand cuts.

“I think,” says Mr. Embry, citing two factors at work, “the U.S. has not lived up to their responsibilities as the providers of the reserve currency because of their financial profligacy.

“But more importantly, the Chinese are conducting themselves in such a way that I suspect they would love to serve that role, and what they’re doing right now is they’re cutting deals with all the other countries in the world in which the dollar is being knocked out of the transaction, so the demand for dollars will drop.

True, both of those figures remain insanely low by historical standards. Still, “yields have backed up [half a percentage point] from the lows,” writes Fusion IQ chief Barry Ritholtz, “and that will affect economic activity, earnings and psychology in ways we may not fully recognize yet.”

“Yields go up for three reasons,” Mr. Ritholtz adds. They are “a) Fed tightening, b) higher inflation, c) increased demand for capital.

“That last point might be the most overlooked: Increased demand for capital. If that is what underlies this move upward, then it would be a positive sign for the economy and equities, and (surprisingly) not a negative one. We simply do not know which yet.”

As for this morning, stocks are treading water. The major indexes are in the red, but barely. The S&P is holding the line on 1,650.

According to the gold index compiled by Kitco, dollar weakness accounts for only a third of gold’s drop. The dollar index has firmed this morning to 83.5.

Recall the “love trade” is Mr. Holmes’ term for the cultural affinity many Asians have for gold — in contrast with the “fear trade” that drives gold acquisition in the West.

“Looking at a breakdown of gold demand from the World Gold Council (WGC) through March 31, 2013,” he writes, “the main source of weakness was the fear trade, as demand for gold ETFs and similar gold products plunged in the first quarter.

“However, the love trade scooped up jewelry and bars and coins, with the tonnage in each category growing 12% and 10%, respectively, on a year-over-year basis. 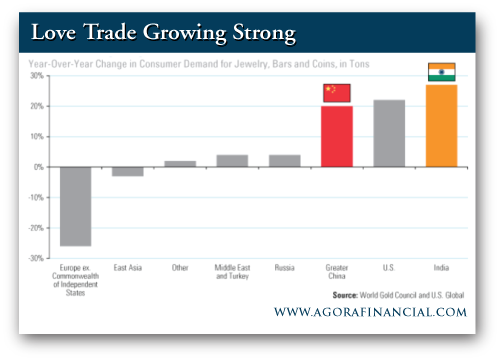 “The love trade doesn’t look like it’ll subside anytime soon,” Frank concludes. Only this morning did the World Gold Council’s CEO project that Indian demand in the second half of 2013 will be as strong as last year: The monsoon season is looking good for farmers’ incomes… and farmers generate more than half of the country’s gold demand.

“The lows are yet to come for the junior mining equities,” warns Sprott USA’s Rick Rule.

“My experience in 35 years in junior equity markets is that bull markets end in an upside blowout,” he tells Casey Research’s Jeff Clark, “and bear markets end in a downside puke. I think we were partway through that a couple weeks ago, but I think it got interrupted. I haven’t seen the sort of cataclysmic capitulation selling that usually marks a bear market bottom.

“I haven’t seen the capitulation selling. What I have seen, for example, are mutual funds being forced to sell to meet redemptions — but I haven’t seen the no-bid market that usually marks the cataclysmic bear market bottom.”

“High-quality” being the operative phrase. “It’s important to note that most of the juniors are nonviable at any gold price.” We’re sure Mr. Rule will identify many that are viable when he joins us in July for the Agora Financial Investment Symposium.

[Ed. note: Indeed, everyone spotlighted in today’s episode of The 5 will join us in Vancouver July 23-26. Rick, Frank and Barry are old hands. John Embry will be joining us for the first time.

Other first-timers this year include Currency Wars author James Rickards… and Chris Anderson, apostle of the “Maker movement” that’s enabling anyone with a good idea and an Internet connection to become a manufacturer.

The juxtaposition of those last two helps to spotlight this year’s Symposium theme — “A Tale of Two Americas.” We’ll try to make sense of breakthrough technologies and an energy revolution taking place alongside epic failures by politicians and central bankers… and zero in on the investment opportunities best positioned to shine during “the best of times and the worst of times.”

We’ve been telling you about early-bird registration discounts for a while now; they come to an end tonight. So if you’ve given any thought at all to joining us, now’s the time to act. Your invitation from Symposium director Bruce Robertson is at this link.]

“We’ve had a run of costly hurricane seasons in recent years,” our value adventurist Chris Mayer writes. “Some guess that we are living in a new age of especially destructive storms.”

Hurricane season begins tomorrow, June 1. The National Hurricane Center anticipates up to 20 named storms, with as many as 11 reaching hurricane status. “One thing is for sure,” says Chris: “Insurance companies have taken a beating insuring property in the path of the great storms. As a result, some of them have given up.

“In the state of Florida, large insurers, such as Allstate and State Farm, have been getting out of the business of writing homeowner policies in the state.”

“Yet,” Chris ponders, “why have nine different insiders plunked over $5 million of their own money on a little St. Petersburg, Fla.-based insurer that specializes in homeowners’ policies in Florida?”

“Yet the average exposure (or insured amount) per policy has stayed roughly flat. Put another way, the insurer is taking the same risk, but charging more for that risk. That 16% might not sound like so much, but keep in mind that most insurance premiums have fallen.”

Following his tried-and-true CODE system, Chris checked under the hood: “Downside seems low. The book value is there to support us. The company is in good shape financially. The insiders own a bunch of stock and have put fresh capital to work in the company. And we have a good hypothesis as a backdrop.

“The whole story,” Chris concludes, “points to a situation in which returns on capital could be pretty good for a few years.”

Chris’ portfolio includes a whole slew of picks that could earn you 42% year after year. How he does it is uncovered in this short letter at this link.

“Kiera Wilmot is going to space camp,” ABC News reports, deviating from the norm with some good news.

You may have heard of 16-year-old Kiera, the central Florida “bottle bomb” honor student who officials accused of setting off a chemical explosion on school grounds. What looks like a mere science experiment gone wrong led to her immediate arrest and suspension from school.

While school officials debated her punishment, NASA veteran Homer Hickam caught the story and had a different take:

“I couldn’t let this go without doing something,” says Hickam. “I’m not a lawyer, but I could give her something that would encourage her. I’ve worked closely with the U.S. Space Academy, and so I purchased a scholarship for her.”

Upon learning of Kiera’s twin sister, Hickam raised enough money so she could go too.

His motive? “In the late 1950s,” ABC explains, “Hickam had a brush with law enforcement for allegedly starting a forest fire. State police came to his high school and led him and his friends away in handcuffs, but his high school physics professor and school principal came to the rescue, clearing him of wrongdoing.”

Maybe best of all, Kiera has been cleared of all charges. Score one small victory for common sense in the era of “zero tolerance.”

“Gentlemen, I sell steel for my livelihood,” reads one of the more intriguing items to hit our virtual mailbox of late. “All my sales are due to infrastructure build-out.

“The development and expansion of the smart grid and redesign of the electrical system, steel to companies that build equipment for fluid handling to the oil and gas industry, steel for support structure for solar and the build-out of refining companies.

“All of that money directly or indirectly came due to the government. I forgot updates to bridges around the country.

“I am not surviving on new productive development, but only on government-supported industries. None of the companies I deal with deals directly with the government, but that is where all the funding is coming from.

“I am just another leech on society.”

“Reader feedback after feedback,” writes one of our regulars, “asks why this program or that one, why allow the government to do this or that.

“Maybe because we voted for all of those ‘whatevers’ — or at least went along with the sheeple. And now it’s too late… Who to blame? Look in the mirror.”

P.S. We’d really like to see you in Vancouver in July… and we’d hate to see you pay full price if you don’t have to. Discounted registration for the 2013 Agora Financial Investment Symposium remains available through midnight tonight.