“The market is all about earnings,” says our Chris Mayer. “They have not been great, and the outlook for better earnings is dimming.”

Traders everywhere are in suspended animation this morning, waiting for Ben Bernanke to deliver stone tablets from atop the Marriner Eccles Building later today. Or something like that. 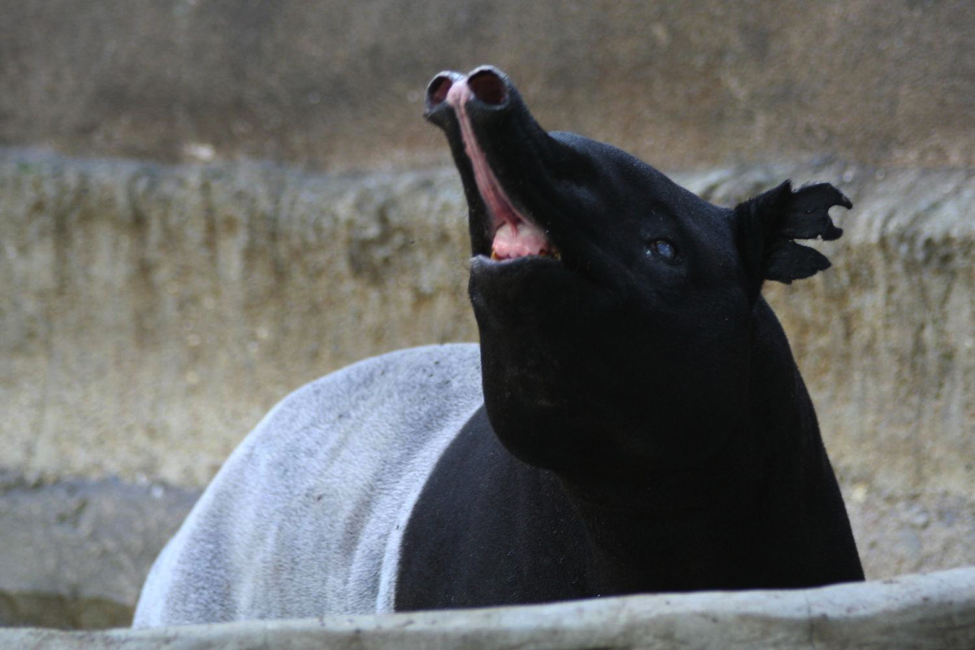 So while we await the taper announcement — or not — we survey the stock market landscape, as earnings season is now less than three weeks away.

“Take a look at this chart,” says Chris, “which shows you the expectations for the third quarter: 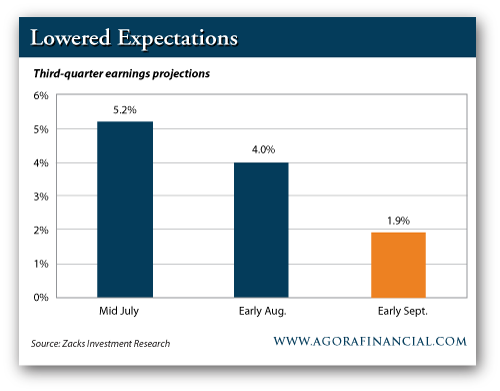 Hmmm… In mid-July, the consensus expectation was 5% earnings growth for the S&P 500. As of early this month, it was only 2%. “And that is probably still optimistic,” Chris suggests.

“This deepening dusk has been going on all year. Yet the market rallied through it. The result is that the price-earnings ratio (one broad measure of value) has gone up. The market is getting more expensive relative to a slowing earnings stream. 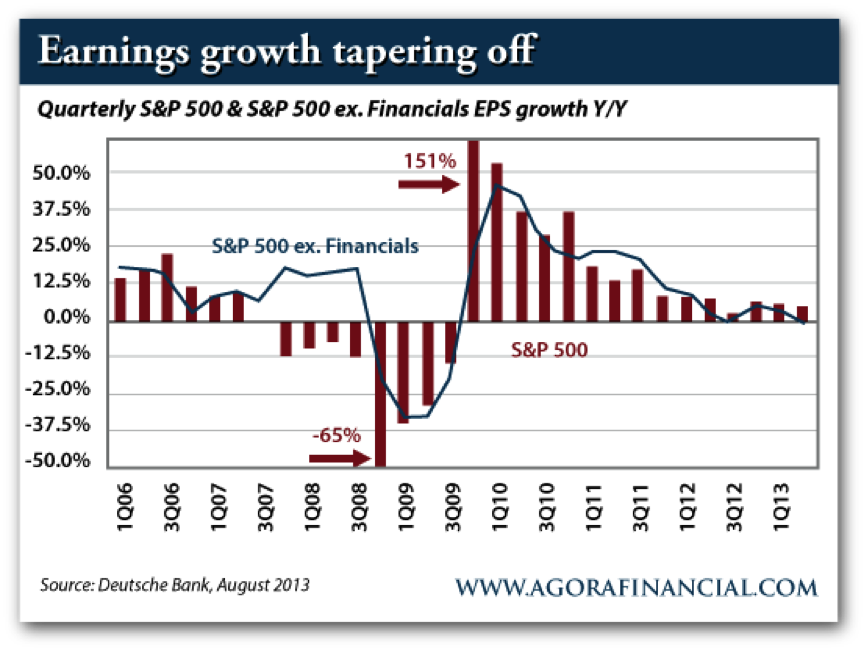 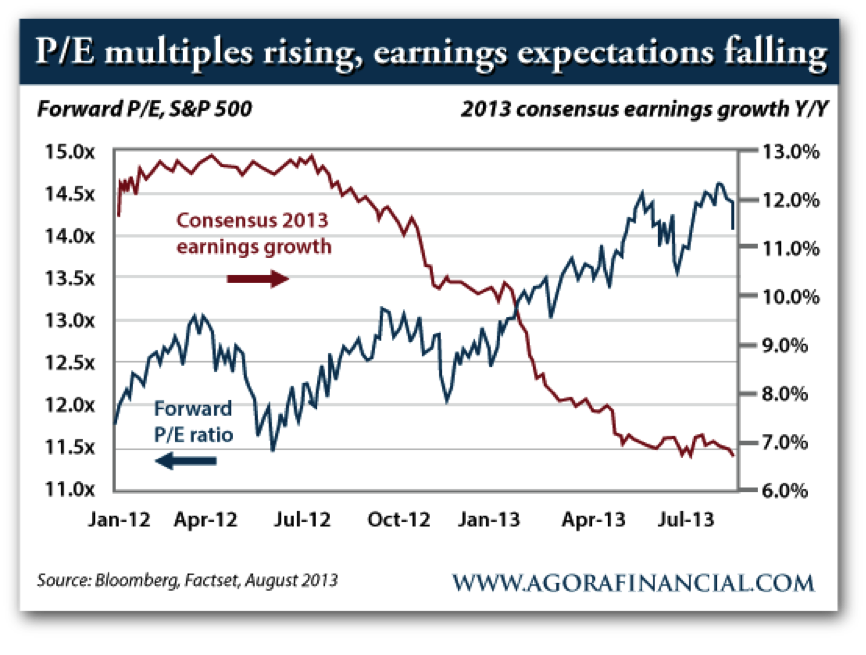 “These charts from JPMorgan show, in essence, that the market rally has outpaced the growth in corporate profits. In a nutshell, that’s what’s made it so hard to find bargains this year.”

[Ed. Note: Chris’ relentless search for bargains has turned up a rare find — a royalty “paycheck program” of the kind that has previously multiplied every dollar invested 50-fold. Opportunities like these can disappear as quickly as they open up… so check it out while there’s still time.]

Once earnings season begins Oct. 8, it could prove a drag on the market — even if the numbers surprise to the upside.

“With the exception of the earnings season that started this past April,” says our Jonas Elmerraji, “earnings have either brought downward or sideways correction over the last year: 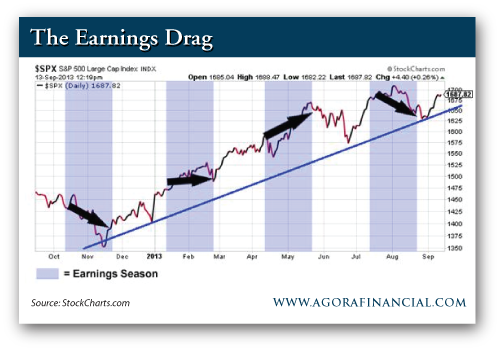 That said, “every period in between earnings season has ended higher than it started — even the last one this summer, with a major correction in the middle of it. That bodes well for where we are now.

“If the previous trend is any indication,” Jonas concludes, “stocks are likely to keep chugging higher between now and Oct. 8, followed by some sideways consolidation.”

For the moment, the major indexes are barely budging. The Dow has dipped below 15,000, but the Nasdaq is adding onto its latest post-2000 high notched yesterday.

Until the Fed renders its decision this afternoon, traders are chewing on the August housing start numbers — which were a disappointment. They rose 0.9%, only because July’s numbers were revised down. Permits — a better indicator of future activity — fell 3.8%, erasing the July gain.

“The Federal Reserve’s stock market wealth effect is getting stale,” writes Dan Amoss, who’s as fatigued by the hoopla preceding today’s Fed announcement as anyone.

“Most traders, obsessed with the tiniest tweaks to the monthly rate of Fed printing, are missing the big picture: Credit growth has outpaced the economy’s productive potential, both here and around the globe.

“Each successive growth spurt in money and credit has a weaker marginal impact on the real economy; this requires permanently easy monetary policy, and perhaps, eventually, a formal devaluation of paper against gold.”

As evidence of that “weaker marginal impact on the real economy,” the Census Bureau has delivered its annual report on Americans’ incomes.

And since we’ve been on the subject of income inequality lately, we see that even the top 10% are no better off now than they were a decade ago… 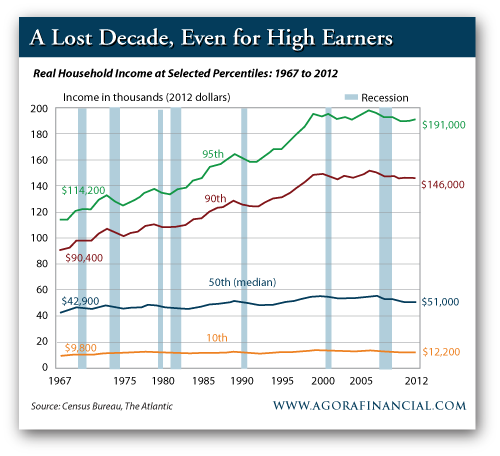 The Census report also totes up the poverty rate. It too is essentially unchanged from last year: 46.5 million people are below the threshold.

The Agriculture Department says a record 23,116,928 U.S. households were enrolled in the Supplemental Nutrition Assistance Program (SNAP) during June.

The number has now crested 20% of all U.S. households.

A barrel of West Texas Intermediate fetches a shade below $106 this morning — near a two-month low. “Oil looks like it’s rolling over,” says Greg. “After a failed run at $110, it appears a trip back to double digits is in crude’s future.” 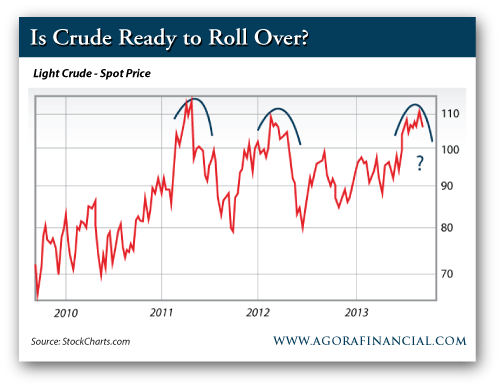 Matt Insley of Daily Resource Hunter concurs: “Even though Libya has incurred a dramatic pullback in oil production, Iraq and Saudi Arabia are moving ahead full steam with oil exports.”

The United States is producing “about 2.5 million barrels per day more than just a few years ago, thanks to fracking,” adds Outstanding Investments editor Byron King, interviewed recently by MarketWatch.

As he’s noted here, U.S. imports from Angola and Algeria have “all but vanished.” Imports from Nigeria and Venezuela are “way down.” Those barrels now compete on the world market with Saudi Arabian barrels.

“I contend that much of the latest ‘dollar strength’ is due to increased domestic oil output,” Byron wrote his readers recently. “Now instead of imports, the U.S. economy uses domestic crude, much to the benefit of the overall economy, tax receipts, the national current account and more.”

Indeed, the U.S. Treasury is on pace to log its first sub-$1 trillion budget deficit since 2008.

Byron anticipated the new fortunes fracking would make nearly two years ago. And it’s not too late to grab your share.

And now for some comic relief from the front lines of the cyberwars.

As you might have heard, Brazil’s President Dilma Rousseff has canceled a trip to the U.S. because of all the spying the NSA has been doing on her country — specifically on her emails and phone calls, and those of the state-run oil giant Petrobras.

Meanwhile, hackers have taken matters into their own hands — and fumbled. Their plan was to hack the NSA’s website and put up a message: “Stop spying on us.”

Alas, something was lost in translation and the hackers hit NASA’s website instead.

Regardless, no damage done says NASA — not NSA — spokesman Allard Beutel: “At no point were any of the agency’s primary websites, missions or classified systems compromised.”

We suspect there’s money to be made as NASA moves to fortify its firewalls. If you haven’t checked out Byron King’s confidential research into the government’s “black budget” for cybersecurity, check it out.

Just because you and I know what “quantitative easing” is, we can’t take it for granted everyone else does.

“A poll leading up to the Fed’s pivotal decision,” according to Reuters, “found just 27% of U.S. adults could correctly pick the correct definition of quantitative easing from among five possible answers.”

We won’t hold it against our fellow Americans, though. They’re too busy earning a paycheck, or trying to find a way to earn one, to pay attention. Besides, the notion that the Fed buying $85 billion a month in Treasuries and mortgage securities would boost the aforementioned “real economy”? It’s daft when you think about it.

“To be sure,” says Reuters, “two of the more popular incorrect answers — ‘a way the Fed makes it easier for commercial banks to borrow money from Fed and relend it to consumers,’ and ‘when the Fed repeatedly lowers its official interest rate’ — were in the right ballpark, if not completely on target.” Another 11% thought it was a provision in the Dodd-Frank bill.

But you gotta wonder about the 12% who thought it was a computer-assisted program the Fed uses to manipulate the dollar.

Actually, come to think of it, that’s the most plausible answer of all!

“I guess Republicans really don’t read the historical documents,” a reader writes, “even in their own lifetimes.”

Oy… We spend a day or two musing on the fifth anniversary of Lehman’s downfall, and Larry Summers’ ignominious withdrawal from consideration as the next Fed chairman… and a few readers appear determined to play partisan gotcha games with other readers.

“Let’s not forget,” this first reader continues, “that the Financial Services Modernization Act of 1999, the legislation that undid Glass-Steagall, was known by the names of its three main sponsors, the Gramm-Leach-Bliley Act. Guess what — all three are/were Republicans.”

“Ahem,” writes another. “It is commonly considered that the dismantling of Glass-Steagall began under the Reagan administration as part of its response to the savings and loan crisis of 1987. At that time, ol’ Ronnie said business is not the problem, government is the problem, and that it was necessary to get government off the backs of the people.

“Total dismantling of Glass-Steagall took 12 years, in fact, ending in 1999 under the Clinton administration. In addition to the ‘usual suspects’ mentioned by your previous commentator, Newt Gingrich and his congressional ‘wing nuts’ (as they termed themselves) kept up pressure to make it happen.”

The 5: Huh? What brought on this emphatic preaching to the choir? Lord knows there’s ample blame to go around…

“It looks like I may have derailed the thread on inequality and confused some readers,” writes our correspondent who wrote in Monday and came under attack yesterday.

“Unlike other Web conversation boards, I did not see this as about taking sides and do not ‘decry technology.’ On the contrary, I have made my living promoting, selling and managing technology solutions for over 30 years that eliminate low-skill jobs while creating a smaller numbers of higher-paying ones. And there are millions like me that do the same.

“Fully understanding that government intervention adds obstacles to the mass in the middle, the clever or well capitalized win bigger and the rules are like the weather in Hawaii… if you don’t like them, wait 5 minutes. Manufacturing has shifted to China. Wait… now the beginnings of a renaissance in manufacturing in the U.S. Wait… something else happens and…

“The harsh reality is that the entitled middle-class jobs aren’t following any of the rule changes. Decry it? May as well stand at the tide’s edge and curse it for coming up. And we can agree that the rising tide of technology raises all boats. How many of the recipients of supplemental nutrition carry smartphones and have AC in their cars?

“And that’s not opined as a problem in search of a solution or a wrong to be righted. It is a trend to be understood toward the purpose of self- and wealth preservation, as those shifts create social pressures borne of entitlement, and jealousy.”

P.S. Those “social pressures” are one certain consequence when the mother of all financial bubbles finally pops. Are you ready?