From Business Class to Burger-Flipping

Yeah, we’d better back up. We introduced Fred Cantu to 5 readers close to two years ago. He’s a veteran anchorman in Austin, Texas, cut loose by his employer in 2010. He had no pension — just a little company stock. At age 56, he was making ends meet in the hardware section at a Home Depot. “I would think back then,” he recalled, “I was making as much as the entire hardware department put together.”

“At the height of his corporate career,” Bloomberg reports, “Tom Palome was pulling in a salary in the low six figures and flying first-class on business trips to Europe” as an executive at Oral-B.

Now at 77, he has two part-time jobs — one as a food demonstrator at Sam’s Club, the other flipping burgers and serving drinks at a golf club grill. The former job pays $10 an hour. The latter, a bit more than minimum wage.

He puts the best face on it: “You have to respect the job you’re doing and not be negative — or don’t do it.” His retirement nest egg totaled only $90,000 going into the 2008 crisis.

“More seniors who spent much of their careers as corporate managers and professionals are competing for low-wage jobs,” says Bloomberg, “For these growing ranks of seniors with scant savings, it’s the end of retirement.”

The typical 401(k) balance among Americans approaching “retirement age” will furnish only $4,800 in annual income, according to the Center for Retirement Research at Boston College.

Thus do only half of older baby boomers surveyed by AARP believe they’ll ever have enough to retire.

Grim statistics, indeed. And it’s one reason we’ve developed an aggressive catch-up program that can help you attain the retirement of your dreams in a mere 30 days.

Hey, we said it’s aggressive. It might not be for you. But if you decide it is, you can get started tomorrow afternoon after the close — when our analyst Thompson Clark issues his next “flash action” trading alert. “This tiny company,” he says, “has what some might call a monopoly on one of the most dangerous (and essential) industries in the country.

“There is significant risk involved,” he cautions, “but the potential for profit is literally limitless.”

Another day, another round of minor losses for the big U.S. stock indexes. At last check, the S&P clings to 1,700 by some very closely cropped fingernails.”

“Look for income-paying investments to get their due,” says our income specialist Neil George.

“Over the past few months,” he acknowledges, “the markets have really been sticking it to just about every investment that pays a decent dividend” — thanks to the endless “taper” chatter.

“Mr. Bernanke has tried to tell everyone that the plan is for the Fed to not only keep buying bonds, but to also keep easy money conditions intact until the stated targets for inflation and unemployment are reached.”

“Put it together,” says Neil, “and we have falling inflation as tracked by the Fed, a job shortage and a mortgage industry that’s gone into reverse — all because folks are concerned that the economy is supposedly heating up and will force the Fed to reverse course with interest rates.”

The money flowing out of income investments is flowing into the big Dow stocks. For now. 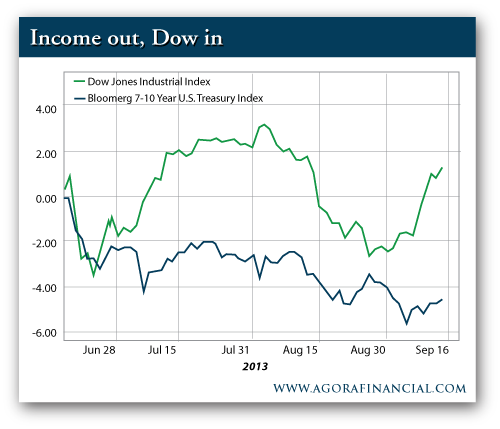 It’s a situation Neil is convinced can’t last. “You can’t have the big companies faring well and the markets pricing in higher growth from them without a better economy. You need more jobs, better-paying jobs and a housing and mortgage industry that’s getting healthier. And that’s not what we’re seeing right now — and what we haven’t been seeing for some months.

“With the reality of slowed growth, the mega companies won’t be able to justify higher stock prices. And without that, retirees and those building their retirement portfolios can’t afford to wait around — let alone risk their portfolios that aren’t paying reasonable dividends.”

[Ed. Note: One of Neil’s favorite income strategies has an added advantage — a tax-free component. If you want to keep more of what’s yours and stick it to the IRS, you need to give this a look.]

The “Re-Made in America” phenomenon is reaching critical mass. A majority of executives at 200 U.S.-based manufacturers finds a majority ready to “re-shore” operations.

“Boston Consulting Group,” according CNN Money, “said its survey found most large U.S. companies now plan to move some production to America from China, or are ‘actively considering’ the move.”

According to the survey, three factors are at work: labor costs (which are rising in China), product quality and proximity to customers.

We saw it coming nearly two years ago: And cheaper American energy is only part of the story, says our Byron King: “This is something far, far bigger than any single, new resource discovery,” he explains. “It’s a natural phenomenon so powerful it has repeatedly altered history.”

He calls it “convergence.” It’s a deep concept — profitable, too. We could barely scratch the surface even if it took up all of our 5 Mins. today. But if you’re interested in how it will change your life — and fatten your portfolio — we direct your attention to Byron’s presentation here.

“The Obamacare that consumers will finally be able to sign up for next week,” Politico reports, “is a long way from the health plan President Barack Obama first pitched to the nation.”

An itemized list follows: “Millions of low-income Americans won’t receive coverage. Many workers at small businesses won’t get a choice of insurance plans right away. Large employers won’t need to provide insurance for another year. Far more states than expected won’t run their own insurance marketplaces. And a growing number of workers won’t get to keep their employer-provided coverage.”

Almost sounds like something set up to fail, no?

That’s exactly what our friend Jud Anglin believes. He runs one of the oldest “medical tourism” businesses in the country — arranging high-quality, low-cost surgery and procedures overseas.

“I believe Obama has specifically designed Obamacare to fall flat on its face,” he says. “After my own extensive research and talking to people inside the industry and other experts, I believe it’s a certainty. The Affordable Care Act is nothing but a political stepping stone to get to a much worse system.”

Jud makes a provocative case. His research has also uncovered ways to work around Obamacare’s worst abuses. You can get higher-quality care at a lower cost than you do right now… and you don’t even have to go overseas. Start getting clued in to the Obamacare loopholes, right here.

With that, a barrel of West Texas Intermediate now fetches $102.42 — a level last seen just before the coup in Egypt on July 3.

And now a stunning visual representation of how gold is flowing from West to East, courtesy of Jeff Clark at Casey Research.

In the West, holdings of gold ETFs have dropped by 26%. But China has scooped up double the amount of gold Westerners have dumped… 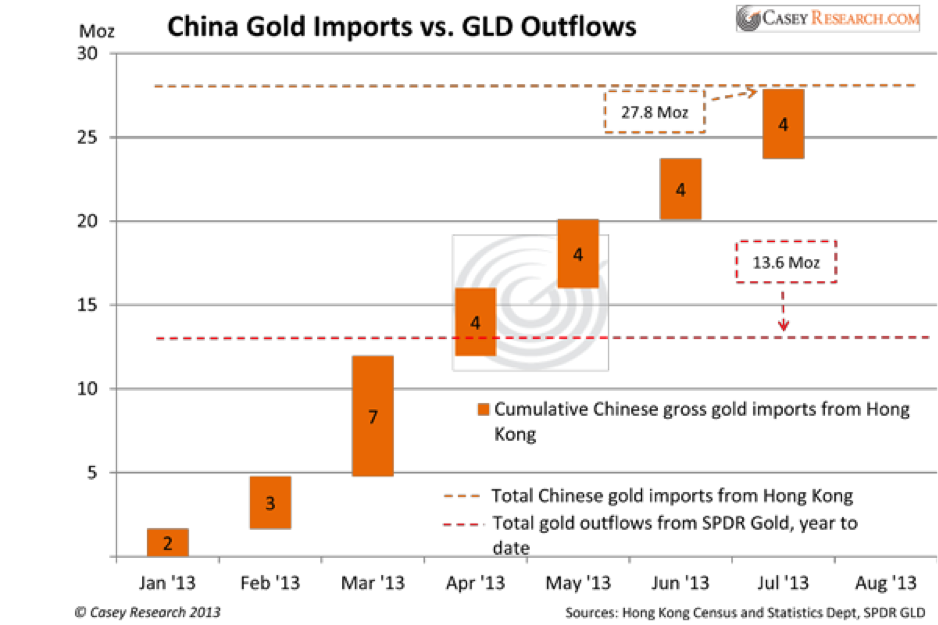 “The red dotted line,” Mr. Clark explains, “represents the total outflows of GLD through last Tuesday. The gold bars are cumulative monthly imports of gold to China through Hong Kong. You can see that China has absorbed roughly twice what most North American ETF holders have sold. It’s actually more than that, because we only have Hong Kong import data up to the end of July.”

Even more compelling: China’s cumulative imports through July already exceed those for all of last year. Meanwhile, Indians bought more gold jewelry and bullion last quarter than anyone else — import duties be damned.

“As Asian countries take over more and more of the market,” concludes Mr. Clark, “their influence on the price will only grow. The gold bull market is not over.”

Someone at Apple Inc. must be reading the commentaries by our friend Frank Holmes, chief of the U.S. Global fund family.

The “gold” version of the new iPhone 5s — it’s actually anodized aluminum — has met with insanely high demand. Supplies sold out in Asia within 24 hours of the phone’s release last week. “I don’t care what’s inside the device,” one buyer told The Wall Street Journal. “Chinese people like gold.”

On the surface, it would seem Apple underestimated demand. But “Apple’s marketing people are not dummies,” writes Jim Edwards at Business Insider. “They can estimate demand prior to a new product launch.” 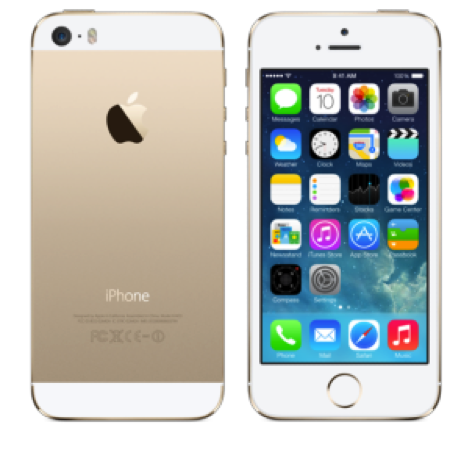 Not real gold. As if it matters…

Even if it’s not real gold…

“To me, it has been a big mystery,” writes a reader picking up on our chart of real household incomes from last week.

“I drew in some black lines to show that there has been break in the trend. By rights, it should be an exponential curve since productivity gains should compound. So my clumsy drawing actually understates the argument. 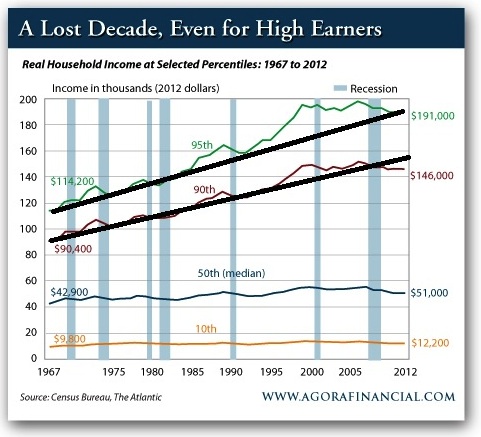 “Of course, the 5% and the 10% have done better than the median, and lowest 10%, which have essentially had no significant increase in real income over a 45-year period. That is a long time. I did not feel like running logs or trying to find my slide rule, but the eye says that the top 5% and 10% have been getting about a 1% per year increase in household income. That, I believe, is slower than productivity growth.

“So the top 10% has benefited less than productivity and the rest have essentially close to static incomes with no benefit from productivity gains.

“Of course, with data like this, one is dependent on the validity of the deflator used, so what looks very precise on a chart may not be as precise in real life in terms of impact on lifestyles. But the message is clear. For some reason, we have not been able to translate productivity changes into increases in household incomes for the majority of people, and even for the higher earners, that trend has petered out or reversed.

“Thus, the Fed has been reluctant to taper, but our policies possibly are implicated in this change in what used to be an improving economy — a change that goes back quite a few years.”

The 5: It is, indeed, a puzzler. Don’t count out the “extraction” factor we’ve documented from time to time — in which resources are extracted from the American people for the benefit of special interests.

It’s been especially obscene in what we once called “the three Hs” — housing, health care and higher education. Imagine how much more prosperous we’d all be if government hadn’t driven the costs of the three Hs way beyond everything else that goes into the cost of living…

P.S. Did you play it? Steve Sarnoff instructed his Options Hotline readers to close out their Disney puts yesterday. The stock was down 4% in a week… but Steve’s option recommendation leaped 67%.

Not to worry if you missed out. As Steve is fond of saying, “There’s always opportunity in options.” And our publisher is making it easier than ever to give Options Hotline a try.