“The Number You Are Calling…”

We begin with an abject apology — and an attempt to make it up to you.

Last night, we held our first-ever live online event, detailing a lucrative short-term opportunity to triple your money on the back of the U.S. energy boom. We spared no effort to make the “user experience” as smooth as possible — a dress rehearsal among the participants, triple-checking Internet connectivity, keeping all hands on deck after hours. 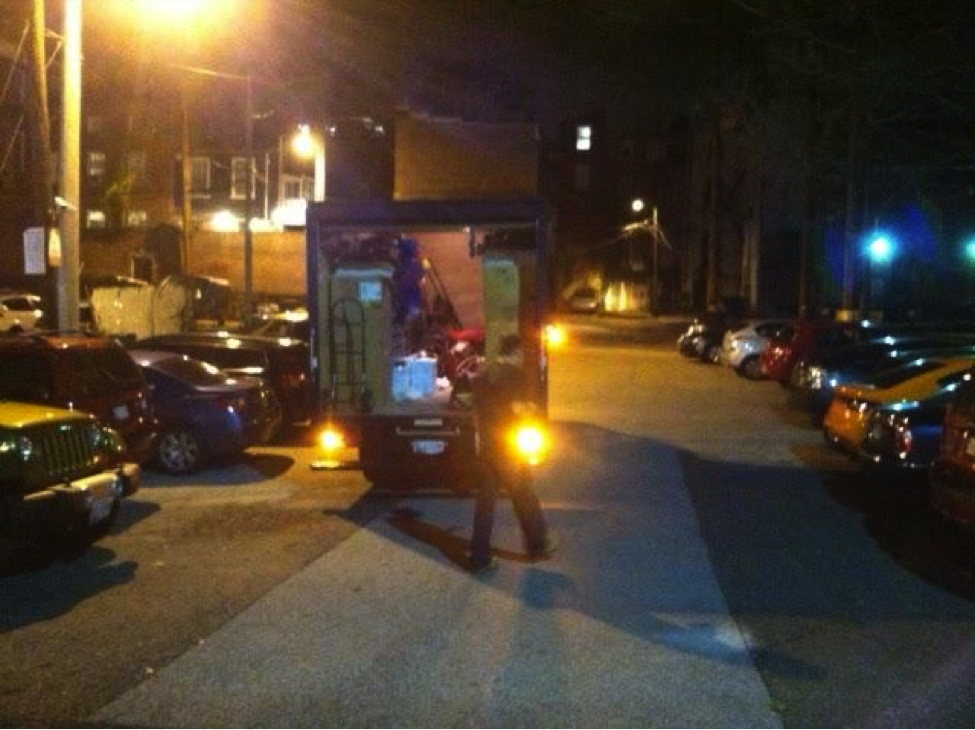 The Agora Financial parking lot: never this full at 8:00 p.m. (We still don’t know what
the guys in the box truck were doing…)

The one thing we overlooked — the phones.

There’s no other way to say it: The system crashed, owing entirely to our lack of foresight. Our telecom provider told us we had 500 incoming calls at the same moment. Many people got through; many others did not. But that’s not on you, dear reader. That’s on us.

So here’s the deal: We’re making the information available again. If you missed the live event and would like to take advantage of the offer, we’re giving you access to a rebroadcast. You can watch it right now.

Once again, our apologies. And thank you.

The S&P 500 is climbing higher into record territory this morning. At last check, the index was up about a third of a percent, to 1,739.

Both the Dow Jones transportation average and the small-cap Russell 2000 are likewise reaching for two straight record closes. The Nasdaq is up about 1%, with Google touching $1,000 for the first time.

Once again, the Dow industrials are a laggard — slightly in the red as we write.

“The melt-up is upon us,” Greg Guenthner informs us in today’s Rude Awakening.

With the D.C. drama in the rearview (at least for now), “there’s not much I see standing in the way of investors buying with both hands leading up to the holidays.

“Your end-of-year strategy is simple: Go for the performers. The names that have already harnessed the momentum will lead you to the most explosive gains heading into the holidays. These are the stocks that are getting bid up this morning [e.g., Google]. Don’t miss the ride.”

Gold is holding on to most of yesterday’s gains, at $1,316. The greenback is still sliding, although the slide is decelerating — the dollar index is down to 79.6.

And now for rumor control, 5 style.

The Web went slightly wild on Wednesday evening with “news” that JPMorgan Chase was “limiting cash withdrawals” and “banning business customers from sending international wire transfers.” There were PDF files of actual letters JPM sent out, for authenticity.

“Capital controls!” screamed several individuals and websites that shall remain nameless. (Some of them rhyme with “hallux bones” and “aero edge.”)

Later came the official denials — which we viewed with equal suspicion. “The fear,” said a report at Fox Business, “is small and medium-sized businesses could be hurt by the restrictions.

That sounds a little too benign…

So we put the matter to our recovering banker Chris Mayer: “I’m a bit stumped,” he said after reviewing the stories and the letters.

“The only reason I can think a bank would do that is to get rid of that kind of business (i.e., small businesses that need to make international wires), presumably to escape or lessen the burden/liability of complying with money laundering laws and such.”

Chris reached out to his contacts still in the industry, and his suspicions were confirmed. Blame it on the Patriot Act and the IRS requirements to flag cash transactions. It’s not new… but the regulators are beating up on the banks a bit more these days, so they have to go through the motions of looking “more” compliant. Especially JPM, which has forked over $8 billion in fines since 2011 for assorted misdeeds, both real and imagined.

Bottom line: Agora Financial takes a backseat to no one when it comes to warning about a “virtual Berlin Wall” trying to keep Americans and their money trapped within the U.S. dollar and U.S. banks. But the letters from JPM do not signal an imminent financial crisis. They do, however, remind us the Sept. 11 mindset remains an obsession of our federal masters.

“It’s not off to a great start,” says Aetna CEO Mark Bertolini of the Obamacare exchanges.

The “glitches” turn out to be worse with each passing day. “Insurers say the federal health care marketplace is generating flawed data,” says this morning’s Wall Street Journal, “that is straining their ability to handle even the trickle of enrollees who have gotten through so far.”

Duplicate enrollments… spouses reported as children… hinky determinations of eligibility… All that and more is cited by executives with more than a dozen insurance firms. “The flaws could do lasting damage to the law,” says the Journal, “if customers are deterred from signing up or mistakenly believe they have obtained coverage.”

It gets worse come Jan. 1. That’s when the penalties — er, excuse us, taxes — kick in if you don’t have coverage. Before you get an unwelcome letter in the mail from your insurer or employer, you might want to check out our Obamacare protection plan.

“This week, we had a stunning glimpse of how the highest levels of policymakers think in Beijing,” says our Byron King — weighing in official Chinese vitriol against the dollar and the debt ceiling farce.

We’ve had no shortage of coverage in the last week — much to the consternation of at least one reader who raked us over the coals Wednesday — but Byron says don’t downplay the significance of the calls by the Xinhua news agency for a “de-Americanized world.”

“A commentary such as this in Xinhua,” says Byron, “means that powerful political factions in Beijing — Communist Party and/or military — hold the expressed opinions. Oft-times, a strong Xinhua piece means that the entire Chinese leadership holds the opinion and seeks to determine how it plays out around the world.

“No senior Chinese agent has ever made a comprehensive, point-by-point refutation of the pillars of U.S. policy, accompanied by the suggestion to rebuild the entire system of global trade and relations between nations. Until now.”

While China is buying its gold on the open market, India hopes to simply get lucky.

What else are we to make of this item from Reuters: “The Indian government is digging for treasure after a civic-minded Hindu village sage dreamt that 1,000 tons of gold was buried under a ruined palace, and wrote to tell the central bank about it.” With apologies to Dave Barry, we swear we’re not making this up.

If you’ve been keeping up with us this year, you know both the currency and the trade gap in India are being wrecked by gold imports.

But if the dream of Swami Sarkar turns out to be true, the $40 billion find would replace all of India’s gold imports for a year.

So the Archaeological Survey of India has dispatched a team to a village in the northern state of Uttar Pradesh. They started digging today.

Unlike the sage, they’re retaining their skepticism: “It is all in the future,” says head archaeologist Praveen Kumar Mishra. “We often just find pottery and metal antiquities, like agricultural tools or kitchen tools.”

“Why,” a reader asks, “is government spending, as you mentioned yesterday, a part of GDP? Makes no sense.

“Government spending either comes from taxes on the productive part of the economy, or from money borrowed (which is supposed to be repaid through taxation, but is repaid these days through further borrowing). GDP, in reality, is reduced by government spending. This should be a basic precept of economic theory, but somehow the theorists have gotten it bassackward.”

The 5: Heck, if it weren’t for government spending, GDP likely would have been negative continuously since 2008. Maybe even 2001.

“Finally,” a reader writes on our ongoing term-limit thread, “more and more outcry to run the devils out of town. A novel, the late Vince Flynn’s book Term Limits, is a worthy read. Hard book to come by, but worth the effort.”

“With regard to term limits,” counters another reader, “I believe it takes a while to learn how Washington works. If we were to limit terms to one term and out, what we would end up with is unelected bureaucrats running the country, with no one to control them.”

“Nothing can be done in a two-year cycle in Congress,” writes a third. “Senators get six years. I suggest that people wise up.

“You can elect people that will respond to people. People are mentioned about six times in the first 10 amendments. Go to conventions and get involved to elect the ones that respond to you and your like-minded friends. I vote for independents or libertarians. Not too many elected, but they represent my thinking of less government!”

The 5: No disrespect, but that sounds like a lot of effort whose only payoff is to feel good about yourself.

“As long as you’re listing ways to improve our politics that ain’t gonna happen,” reads our next entry, “wrest the redistricting of congressional districts from the hands of the parties.

“Yup, make it nonpartisan. Candidates would then need to run more toward the center in the primaries, rather than to the extremes.

“Tax any and all campaign contributions above, say, $500 per donor per campaign. As long as we’re countenancing payments for ‘free speech,’ we might as well get some government funding out of anyone that can afford to part with the cash.

The 5: We’re rather fond of having more congressional districts. The Founders envisioned districts with 30,000-50,000 constituents, not the 700,000-constituent monstrosities we have today.

Of course, you’d need a House with something like 6,000 members…

With that in mind, you might wish to examine our special report, Make Yourself Invisible to the NSA. It’s available free to every subscriber of our new Laissez Faire Letter. Check it out here.