Crude’s orderly climb down from triple digits isn’t over yet. As we write, a barrel of West Texas Intermediate fetches $96.40 — a 4% drop so far this week.

We’re that much closer to the “landing zone” around $90 that technician Greg Guenthner identified here on Sept. 18. 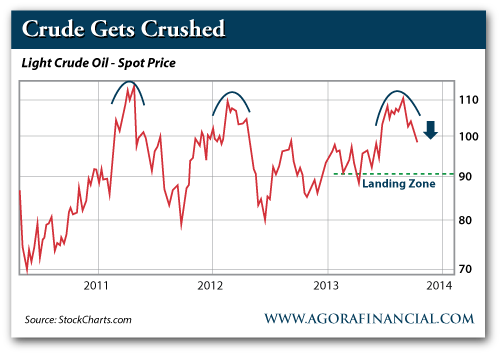 Since crude bottomed at $33 in the depths of the financial crisis, it’s made three runs toward $110. Each time, it’s been beaten back. And this third time appears no different. “We’re seeing very similar action this week,” says Greg, “after yet another go at the highs with no follow-through.”

All hail the fracking revolution. U.S. inventories are high. U.S. imports are dropping like a stone. Saudi Arabia? Who needs ’em?

Whoops… Saudi Arabia is still America’s No. 2 foreign supplier, behind Canada. And the princes and sheiks are having a snit.

The kingdom’s intelligence chief and former ambassador to Washington, Prince Bandar bin Sultan, is dropping hints to European diplomats that Saudi Arabia is thinking about a “major shift” away from the United States.

The House of Saud was itching for Washington to start another no-win war against the regime’s enemies in Syria — and was deeply disappointed when the war didn’t materialize. The princes are further disappointed by rapprochement between the United States and another regime opponent, Iran. Last week, the Saudi Arabian government turned down a seat on the United Nations Security Council — and let it be known the diss was directed less toward the U.N. and more toward the U.S.

“The message is: You need us. And we are not going to play ball with you until you wake up,” says a Reuters story attributing the remark to “a Saudi analyst close to official thinking.”

“For all our unmatched military power, Americans no longer command the ability to shape trends in the Middle East,” says Addison Wiggin’s acquaintance Chas Freeman.

Mr. Freeman is the veteran diplomat who was U.S. ambassador to Saudi Arabia during the 1991 Gulf War. “Delusions of imperial omnipotence die hard,” he said this week at a conference in Washington.

“The simple world of colonial and superpower rivalries is long vanished. The notion that one is either ‘with us or against us’ has lost all resonance in the modern Middle East. No government in the region is prepared now to entrust its future to foreigners, still less to a single foreign power.”

This new reality puts America’s No. 2 foreign oil supplier in a peculiar position — distancing from the U.S. while surrounded by either turmoil or hostile powers. 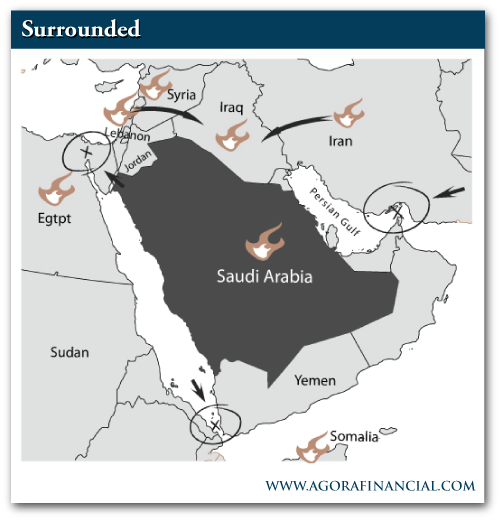 “Look at the world from the Saudi/Sunni perspective,” says our Byron King, an expert on matters both energy and military. “Virtually all Saudi oil exports pass through what navy people call geographic ‘choke points.’ That is, tankers pass through narrow oceanic zones that are subject to closure or make for relatively easy attack.

“For the kingdom of Saudi Arabia, the problem begins with the Strait of Hormuz in the east, where Iran could make quick mischief if the mullahs were so moved. To the south, KSA is hemmed in by the narrow opening of the Red Sea. To the northwest, Saudi sea access is limited by the need to travel through the Suez Canal. Thus, right away, KSA has a strategic issue with access for its oil to world markets.”

And don’t forget the Shiite Muslims within Sunni-ruled Saudi Arabia itself. Most of them live in the oil-producing regions. The princes are so frightened of Shiites that Shiites are barred from military service.

“Saudi Arabia — essential to the global oil supply — is surrounded by strategic choke points as well as restive groups of Shiites,” Byron sums up.

“Entire populations and Islamic sects across the Middle East want to see KSA go down, either through internal strife or external meddling. And if that happens, it could instantly drive oil prices much higher.”

“As an investor, you need to move away from this looming conflagration!” Byron urges.

“Expanding Middle East conflict has the potential to drive global energy prices through the roof. Thus, you want to preserve your wealth in the days to come and angle toward the best prospects for future gains in a tumultuous world.” Occidental Petroleum just got the memo: It plans to bail on its Middle East operations to focus on its Texas and California holdings.

“Focus your energy portfolio far from the ancient strife and oil wars of the Middle East,” Byron urges. That’s not new advice if you’ve been reading our virtual pages for a while. But the aforementioned Greg Guenthner, examining his charts, says now’s the time to pounce on the U.S. energy producers with no Middle East exposure.”

“While the big, multinational oil companies continue to slip,” says Greg, “domestic producers are setting up beautifully. Even with oil tanking, I’m still seeing constructive setups in these names.”

For a comprehensive rundown of the players Byron thinks are best positioned goose your portfolio, click here.

The major U.S. stock indexes are gaining ground today… for reasons no more obvious than yesterday’s losses. The S&P is back above 1,750.

“One headline,” Barry Ritholtz blogs this morning, “notes that ‘U.S. Stock Futures Rise Amid Earnings, China Factory Data’ — but we had mixed earnings yesterday, and so far, earnings are mixed today. And Chinese economic data was good yesterday. This leads to my regularly offering up my insight with a big fat I don’t know.

“All too often, investors try to construct a plausible explanation, typically in narrative form, as to what is going on. The danger is not so much that they fail — that is to be expected — but rather that they confuse their confabulated narrative for truth and mistakenly believe their own bull**** for reality.”

Make of it what you will… but the typical Greek is wealthier than the typical American. Yes, Greece, that perennial basket case now on its 674th bailout.

Gold is catching a bid this morning. As lunchtime approaches, the spot price just cracked $1,350 for the first time since its brief fake-out when the Fed opted not to “taper” five weeks ago.

The gags about gold growing in trees practically write themselves.

Research just published in the journal Nature Communications has detected traces of gold in eucalyptus trees — which might signal the presence of gold in the earth below.

“Eucalyptus trees,” reads a summary by Agence France-Presse, “can send their roots deep into the ground in search of water in dry areas, even breaking into gold-rich zones, where they absorb microscopic metal particles as they drink.”

The researchers studied eucalyptus trees at two gold-prospecting sites in Australia. They say their discovery “promotes confidence in an emerging technique that may lead to future exploration success and maintain continuity of supply.”

“A big thank-you,” a reader writes after Greg Guenthner’s call yesterday for a fourth-quarter gold rally.

“I was disappointed in — and disagreed with — Greg’s call earlier this year for gold to drop to $1,050, but am glad he had the guts to write what he thought — and, more importantly, explain why — so we can make our own informed decisions.

“That is precisely what us hoi polloi here in flyover country need — information — that may not always jibe with our presuppositions. There is money to be made doing a good, honest day’s work – and you guys are doing it. As my Aussie friends would say, ‘Good on ya!'”

“Regarding your report about increasing U.S. banking controls on foreign wire transfers,” reads our next email, “I went to my local Wells Fargo branch yesterday to wire money to my account in Uruguay to fund some work on my home there.

“The amount was small, less than $5,000. Wells Fargo yesterday invoked a ‘new procedure’ for nonbusiness foreign wire transfers. What should have been a 10-minute process took nearly an hour, with the unlucky banker I dealt with spending all that time on the phone with New York getting approval to do the transaction. When asked why, he said they had new procedures due to the Dodd-Frank Act that were intended to protect the consumer.

“How this protected me and from what is a mystery to me. All I know is that our government, in trying to protect me from moving my money, cost me and Wells Fargo a good chunk of our afternoon, far, far more than justified. Once the transaction is approved, there is a 30-minute delay before initiating the transfer, ostensibly to allow me time to cancel the transaction. I wonder who really had to approve it.

“Multiply that times the number of people wanting to move cash on any one day and it is a terrible cost and burden to all of us, not to mention the invasion of our privacy.”

“Yeah,” a reader concedes about the inflammatory presentation from the Laissez Faire Club, “I give you a partial ‘got me’ because I had to see what all the vitriol was about. Can’t say it held my attention.

“But I am moved to respond to the comments about the rollout of Obamacare. Why the excitement? It’s a mess, but remember the stated goal: universal single-payer ‘health care.’ This will muddle along in stumbling failure, anger the multitudes and then morph to single payer.

“Some argue that this is Obama’s legacy and it can’t be allowed to fail. No, it’s universal health care, passed into law and blessed by the Supreme Court. Without the president and both houses of Congress committed to changing it back to some new private system, the true-believer government will change it to single payer with the approval of the sheeple.”

The 5: Your outlook jibes perfectly with that of our friend Jud Anglin, proprietor of a medical tourism business and dogged researcher into the vicissitudes of Obamacare. See his findings here.

P.S. Last call: Byron King’s expose on a $23 billion Pentagon plan that could make early investors as much as 55 times their money goes offline at midnight tonight. Here’s the scoop.