Being Right or Being Happy

“It was if the tea party and Occupy Wall Street had clasped hands,” writes Adam Serwer at MSNBC’s website.

On Saturday, about 2,000 people gathered in Washington for a “Stop Watching Us” rally against the NSA. Sponsoring groups ran the gamut from the ACLU and Daily Kos to the Competitive Enterprise Institute and FreedomWorks. 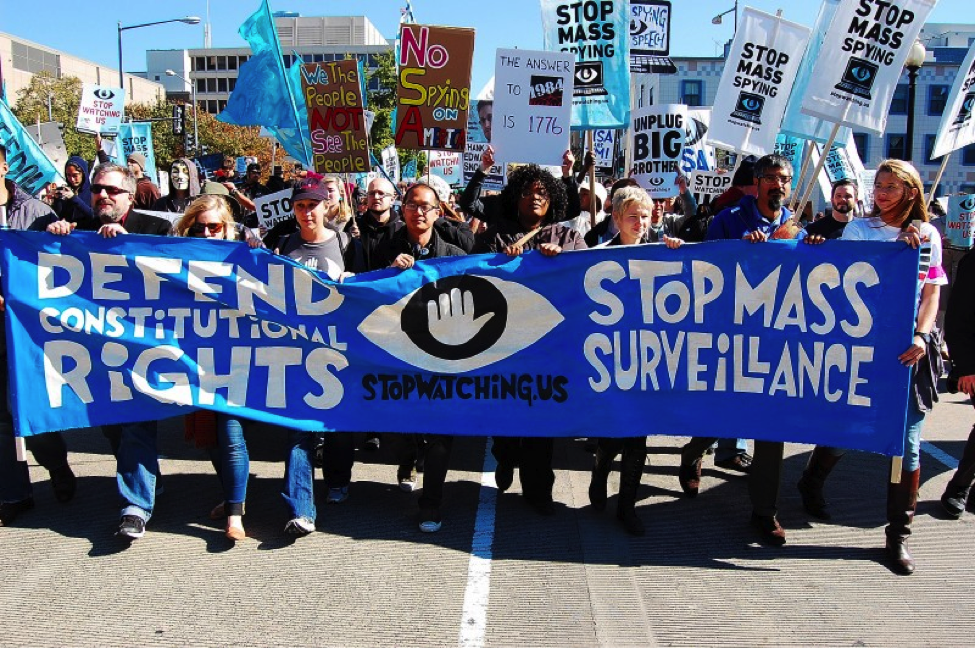 United against the surveillance state…

“The crowd at the protest,” writes Serwer, “reflected the strange political hodgepodge that has found common cause in protesting the NSA.”

We mention this in part to tweak readers who become outraged every time we point out the common ground between the tea party and Occupy — something we spotted almost from the start of the Occupy movement.

But now that there’s concrete evidence the two movements are joining in common cause… and before you scroll down to the email link to vent about how you have nothing in common with those dirty freaking hippies… we pose a simple question.

Do you want to expend energy justifying your tribal affiliations… or would you rather take concrete steps to keep your affairs away from the NSA’s prying eyes?

For that matter, do you want to complain about Obamacare or take action to avoid the worst of its onslaught? Rail against the IRS, or do a thing or two to legally reduce your tax bite?

We’ll have more to say about all these matters in the days ahead, but for now… if you want to choose happiness but you’re not sure what to do or where to go… we humbly suggest starting here.

Major U.S. stock indexes are pausing for breath after last week’s rally. The S&P is down a point as we write, to 1,758.

“I can’t think of a chart that’s much more bullish than this one,” says technician Jonas Elmerraji, looking back on the S&P’s rally that started Nov. 16 last year. 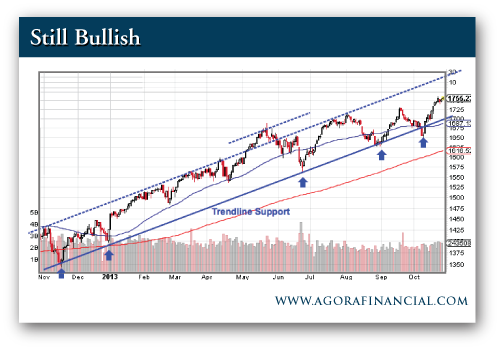 For the most part, the average investor hasn’t been taking part — still spooked by 2008, still sitting in cash and bonds. “I think it all comes down to how much pain regular investors can take,” says Jonas.

“The folks who swore off stocks after 2008 have witnessed a market that’s rallied more than 150% since the March 2009 bottom. You can only watch stocks deliver huge year-after-year performance for so long before you decide to go back to Mr. Market. As all of that money comes back online, it’s going to provide a lot of fuel for stock prices.

“And as I recently discovered, the rotation from cash back to equities has historically started around five years after major market crashes. That’s far longer than most analysts expected — and guess where we are now?”

Where we are now is the perfect time to take advantage of Jonas’ 100/100/$100 trading challenge, affording you the chance to plow an extra $100 into your retirement account every day. No previous trading experience required.

It’s a new world when hackers can cause a traffic jam. And that’s what happened on Sept. 8 in Haifa, Israel.

“A Trojan horse attack,” reports The Associated Press, “targeted the security camera system in the Carmel Tunnels toll road on Sept. 8. A Trojan horse is a malicious computer program that users unknowingly install that can give hackers complete control over their systems.”

Result: “an immediate 20-minute lockdown of the roadway.” The hackers struck again the next day, during the morning rush — setting off an eight-hour traffic jam. 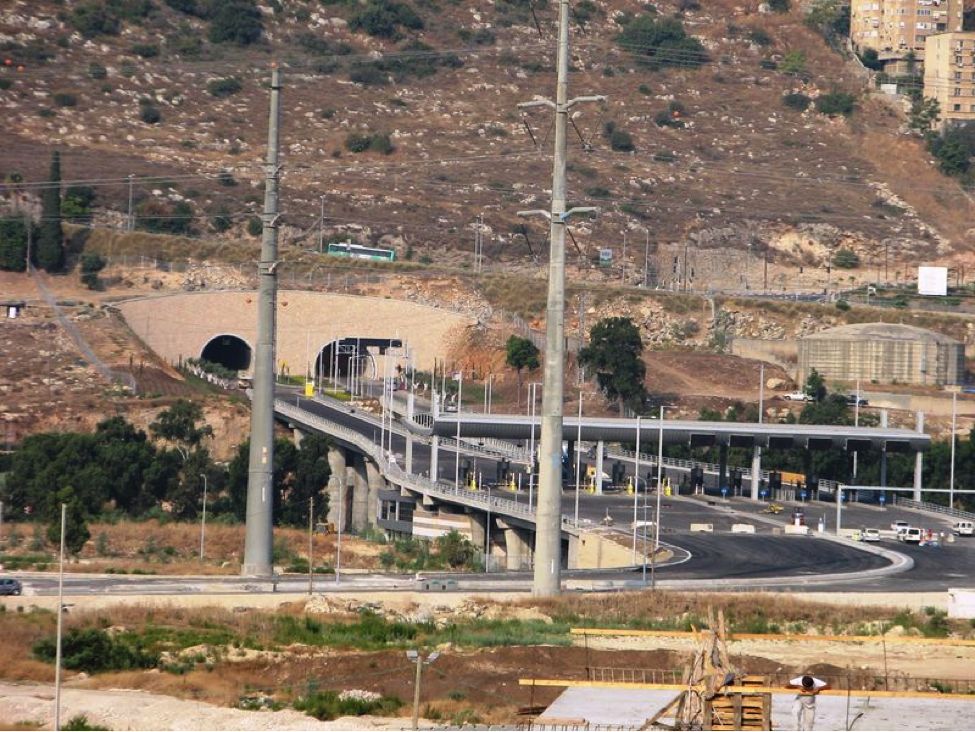 The expert who tipped off the AP about the attack says it was clearly the work of well-practiced hackers, but not sophisticated enough to be the work of a foreign government. “While Israel is a frequent target of hackers,” says the story, “the tunnel is the most high-profile landmark known to have been attacked.”

Earlier this month, Israel’s military chief Lt. Gen. Benny Gantz spoke of cyberthreats — without disclosing the attack that had taken place weeks before. He spoke of “a cyberattack on websites which provide daily services to the citizens of Israel. Traffic lights could stop working, the banks could be shut down.”

“Most of these systems are automated, especially as far as security is concerned,” says Oren David of the international security firm RSA. “They’re automated and they’re remotely controlled, either over the Internet or otherwise, so they’re vulnerable to cyberattack.” And Israel is “among the top-targeted countries.”

[Ed. Note: Where cyberthreats loom, money follows. That’s why we’ve been pounding away at the cybersecurity theme for nine months now. One of the biggest sources of money is the Pentagon’s “black budget.” To follow the $23 billion money flow — and channel some of that flow into your own pocket — check out this briefing from Byron King, gleaned from newly declassified documents.]

Gold is adding a bit to last week’s gains. At last check, the bid is $1,360 — and that’s despite a bit of dollar strength this morning, with the dollar index up to 79.3.

“Gold has now extended its rise from the recent intraday low of $1,252 the morning after the debt limit suspension,” writes Alasdair Macleod at GoldMoney, “forcing a number of analysts to have a rethink.” For instance.

“These contrast,” writes Mr. Macleod, “with Goldman Sachs’ widely publicized recommendation earlier in the month that gold ‘is a slam-dunk sell,’ a recommendation that is now underwater.”

“Goldman’s ‘slam-dunk sell’ opinion on gold,” submits our Dan Amoss, “was based on the assumption the U.S. is entering a self-sustaining economic recovery. Such a recovery, in Goldman’s view, would continue despite a gold-negative monetary tightening by the Fed.

“What we have is a global economy that’s addicted to ever-higher doses of monetary stimulus. As investors recognize the addiction, demand for gold will rise.”

“There is going to be a change in how we pay these taxes,” says Hasan Ikhrata. “The technology is there to do it.”

Mr. Ikhrata runs the Southern California Association of Governments. His group is making plans for the state to track the miles driven by every California motorist by 2025.

Welcome to the latest entry in our “new taxes and weird fees” file. Get used to hearing this trope: Gasoline taxes no longer cut it for maintaining highways. The federal gas tax hasn’t been raised in 20 years, and it wouldn’t make much difference if it were, because U.S. gas consumption plateaued in 2005-07 and has been falling since.

The supposed solution: “a little black box that fits neatly by the dashboard of your car,” says the Los Angeles Times. It logs your mileage, then sends you a tax bill.

“The tea party is aghast,” the paper reports. “The American Civil Liberties Union is deeply concerned, too, raising a variety of privacy issues.” (Sorry, we couldn’t resist including that.)

No sign of action in Congress right now, but several states are moving forward. Experiments are underway in Minnesota, Illinois, Nevada and Oregon — where the aim is to sign up 5,000 drivers to start.

Coming on the heels of the “rain tax” in here Maryland, who knows what’s coming next? Be ready.

“For those who believe a single-payer system will work,” begins a new week of Obamacare email, “you need look no further than what the federal government has done with Social Security and Medicare.

“Both have large funding issues in the very near future, and their continued existence is shaky at best. So what makes anyone believe a single-payer health care system will work out any better, or, for that matter, the health care act we now have?”

“Anyone who thinks that going to a single-payer system in the U.S. will cut medical costs in half, or even reduce them at all,” writes an expat reader of our Equity Reserve, “doesn’t understand who is benefiting from the high prices.

“Sure, single-payer systems in other countries may cost only half of what we pay, but Congress is not about to pass any legislation, even single-payer, that will significantly cut income to any of the companies or industries that so generously fund their re-election campaigns, and thus, significant reductions are not possible, regardless of who is paying.

“The exception, of course, would be if all individuals were paying directly for their own care. Which is why they will NEVER let that happen. It’s not concern for the people who couldn’t afford care, but rather for the companies that depend on the current system for their inflated income.”

The 5: Amen. To the extent single-payer “works” elsewhere in the world to keep costs down, it won’t be allowed to do so here. The entrenched interests are simply too powerful and we’ll get the worst of all worlds — no choice and pay through the nose for it.

That’s why it’s important to act now to lessen the blow from Obamacare before the individual mandate formally kicks in on Jan. 1.

“You received at least two click-throughs from me,” a reader writes, “on the ‘Obama’s Mistress’ presentation. I still don’t get the outrage over it.

“If people were as vocal with outrage directed at their government keepers, we would be much better off. Instead, their heads spin 180 and they begin speaking in vitriolic anger over a simple sales ad. Or blowing up over the length of The 5 being too long or too short.

“Bring back the feral hogs! That seems to be cerebral enough for the readership.

“Sweet Heyzus are we screwed if this represents most of your readership, which I thought was a little more rational than this.

“Love The 5, although it was about seven seconds short today.”

The 5: We hope you put those seven seconds to productive use…

P.S. One last word about “Obama’s Mistress.” In retrospect, maybe we should have learned our lesson a year ago.

Then, we were making the case the government was waging “The War on You.” Partisan politics were the last thing on our mind as we explored the theme. But with the 2012 election looming, that’s the prism through which people viewed it. You voted with your emails — and your wallets — accordingly. “Get back to your roots!” was a common message.

The reception this time around wasn’t even that kind. Perhaps deservedly so.

Our “roots” are all about delivering actionable advice to make your life better in spite of everything politicians and central bankers do to screw it up, accidentally or otherwise.

With that in mind, we bring today’s episode full circle, back where it began. If you want to take one simple step to make your life better, we can’t think of a better way to begin than by following this link.