Here’s a midweek mind-bender: The all-American “fracking” revolution that’s reducing U.S. dependence on foreign oil is getting a boost from technology developed… in the Soviet Union.

For real. At the moment, the technology is in use only in a handful of fields in the Rocky Mountain West. It’s nowhere near mainstream awareness yet — hence the opportunity for early investors to make a small fortune. Or even a big one.

The opportunity stems from a fact you might not know unless you work in the oil business: Bacteria can be an oilman’s biggest enemy. If water is present — and it often is — bacterial blooms can follow. That can “gunk up” an oil well in no time.

The ideal fix is a “miracle water” called hypochlorous acid — the same stuff your white blood cells produce to kill bacteria. It’s easy to make using water, salt and electricity. But it’s really hard to make in commercial quantities as a liquid; left to its own devices, the solution will break down and release gaseous chlorine.

Thus did an enterprising scientist in 1970s Soviet Russia develop a means to keep the solution stable and useful. Soon the Soviets were dumping the stuff down their oil wells to keep them humming.

Once the Cold War was over, the technology was licensed in the West. For a while, Monsanto took a stab at producing the “miracle water” commercially, but gave up when shareholders balked because the venture was too far afield from agriculture.

In time, the technology ended up in the hands of a very small company that, frankly, didn’t know what to do with it. The previous management spent years trying to sell equipment that would enable buyers to produce their own “miracle water.”

Now new management is onboard and has hit upon a far better idea: The company will produce the stuff itself and sell it to willing buyers — a much higher-margin business. The firm can make a handsome profit selling hypochlorous acid for $5 a gallon. That price looks really good compared with the product currently used to remove bacteria from wells — which costs as much as $35 a gallon.

Already, as we said, the “miracle water” is in use in a small patch of the Western U.S. This one region is home to 9,000 wells. If every one of them used this solution, they’d each use 400 gallons of the stuff every week. Multiply that by 50 production weeks per year and that’s 180 million gallons each year, at $5 per gallon.

The story gets better… because as you might imagine, the applications go way beyond the oil field.

Hospitals can — and will — use this solution. For decades, they’ve used liquid ammonia to keep surfaces clean. Result? Many bacteria have developed a resistance to liquid ammonia. But the “miracle water” can kill those bacteria on contact. Workers don’t even have to wipe off the surface; the stuff simply evaporates.

And get this: Under the Affordable Care Act, hospitals must eat the cost if a patient becomes infected while under the hospital’s care. So there’s ample incentive for hospitals to put “miracle water” to work.

As we said, the company’s under new management. The guy running the show has a track record. He grew his last company from a market cap of $80 million to $5 billion. That is, every dollar invested turned into $62.50.

Just one problem: As we said, the firm has a market cap of $19 million. It’s not even a microcap; it’s a nanocap. If only 500 readers of The 5 acted today to buy a mere $1,000 of shares each, that could spike the share price 2.6% within hours — or much more if “momentum traders” saw the action and swooped in.

We don’t want that to happen. We want the share price to grow on its own and the company’s potential to develop over time. So we’re allowing only 25 readers access to the special report spelling out the name and ticker symbol today. And we’ll allow 25 more tomorrow. After that, it’s done. We’re pulling the presentation offline at midnight tomorrow night. If you don’t want to miss out, give it a look while you still can.

And we apologize in advance in the event our quota of 25 is filled by the time you click this link. We hope you understand.

“After a brief hiatus,” says Greg Guenthner, “boring stocks are back.” Indeed, they are: The S&P 500 touched seven record closes the last two weeks; the Dow’s record yesterday is the first since Sept. 18.

“While financial and materials stocks have lagged, consumer staples and cyclical names are surging. The big, safe stocks everyone wanted earlier this year are suddenly back in focus.

“While the S&P is getting a little overheated right now, the Dow has picked up the slack. That’s healthy market action as we race toward the end of a wild trading month. We’ve seen a lot of healthy rotation during the recent stage of this bull move. It’s good to have different stocks take the lead while the overextended names rest.”

By the time you read this, the Federal Reserve will have issued its latest policy pronouncement, good for the next six weeks.

Anyone entertaining further thoughts of the Fed “tapering” its money-printing spree likely dismissed those thoughts after the latest economic numbers this morning.

“The more places you can trade renminbi the better,” says Paul Mackel of HSBC. “It will enable this currency to be used much more widely.”

Today’s Financial Times includes an account of global financial centers falling all over themselves to become the go-to place to trade the Chinese currency. In Europe, London, Luxembourg, Paris, Frankfurt and Zurich are all in the running. The Asian competition features Hong Kong, Singapore, Taipei and Sydney.

New York, you wonder? Nowhere to be found.

“There may be some currency competition at play,” says Zhang Ming, an economist with the Chinese Academy of Social Sciences, “with the U.S. worried about challenging the dollar. The U.S. government has not been like Europe in focusing on the renminbi.”

For now the amounts are minuscule, and will remain so until China loosens its capital controls. But the longer-term trend is unmistakable — knocking the dollar off its perch as the world’s reserve currency.

Given how well it’s been managed, can you really blame the Chinese? Look for a bombshell announcement or two next month when the Communist Party’s Central Committee meets to set policy for the next five years. They get underway a week from Saturday.

The Legatum Institute — the research arm of a Dubai-based private investing outfit by the same name — is out with its seventh annual rankings of wealth and well-being around the world. Last year, the U.S. fell out of the top 10, to No. 12. This year, it’s moved up a bit… 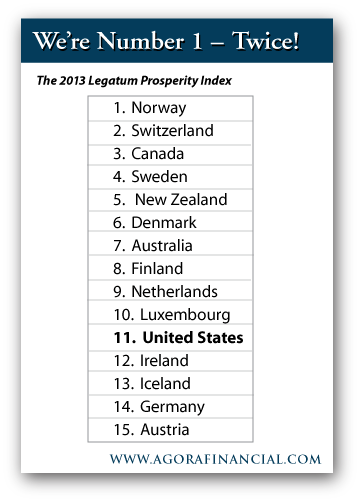 Legatum has eight subcategories, and in the one labeled “economy,” the U.S. has tumbled out of the top 20. At No. 24, the U.S. actually ranks two notches below… France.

“The U.S. can no longer be seen as the most prosperous nation in the world — indeed, it’s no longer even in the club,” says Jeffrey Gedmin, the institute’s president and CEO. “This year’s index shows that Americans are suffering increasing hardship as a result of the country’s economic condition.”

Mr. Gedmin, according to his Wikipedia entry, is an American. Indeed, he used to run Radio Free Europe/Radio Liberty. Ouch.

Here we go again: Smugglers trying to bring gold into India via an airplane toilet.

Police were called in, whereupon they counted 280 bars weighing 70 pounds worth $1.9 million.

“Custom officials,” reports the tabloid, “said they knew the bars were onboard and believe the person carrying them sensed there was a police presence and abandoned the gold in the toilet of the aircraft before fleeing the scene.”

Bangladesh, you ask? “Along with neighboring Nepal,” reads a report from Mineweb, “Bangladesh is a major conduit for smuggling gold into India,” the better to skirt India’s steep import duties.

“OMG, I cannot believe I didn’t think of that,” writes a reader replying to the suggestion in yesterday’s mailbag that the Obamacare “navigators” will likely come from the same gene pool as TSA employees.

“All those folks who are too, let’s say, proud, to work at Mickey D’s or deliver a pizza, to work a hard labor construction job or work in the fields, that went to TSA are now working the phones and sign up process for the Affordable Care Act. Whoa, we are doomed after all.”

“I think I have solved the HealthCare.gov problem,” reads an email from a reader who hastens to add the suggestion came from “a friend.”

“We should reassign the project from HHS to the NSA. The NSA could pre-populate the insurance database with the information they already have about us, reducing substantially the time required for registration and improving site performance. NSA could also reassign some programmers from the international phone tapping department and improve performance further through big data programming techniques.”

The 5: Stop giving them ideas!

P.S. HHS Secretary Kathleen Sebelius is testifying on Capitol Hill as we write. “Hold me accountable for the debacle” of Obamacare, she said. “I am responsible.”

There was no such sword-falling yesterday by NSA chief Gen. Keith Alexander, who told Congress he’d rather “take the beatings” from the public and media “than to give up a program that would result in this nation being attacked.”

The media love to talk about who is and isn’t “taking responsibility” for whatever’s going on within government. But what are you doing about your responsibility to preserve your liberty?

Really, not to be harsh here, but what are you doing to stand up against the depredations of the NSA, of Obamacare, of the IRS? We’re not talking about signing petitions or calling your congressman. We’re talking about actual steps you’re taking to muddy the tracks you leave behind for the NSA… to make sure you’ll retain quality health care at a manageable cost… to keep your tax burden as low as legally possible.

So again… what are you doing?

If there’s a nagging answer in the back of your head that says not enough… but you don’t know what to do or even where to turn to for guidance… we encourage you to take your power in your own hands and grab an invaluable resource to accomplish these goals and more. As you take back your own freedom, you’ll set an example for others to follow, and the “sacred fire of liberty” George Washington spoke of will spread.

But we can only show you the way. You have to take the first step.