The Silly Season Is Here 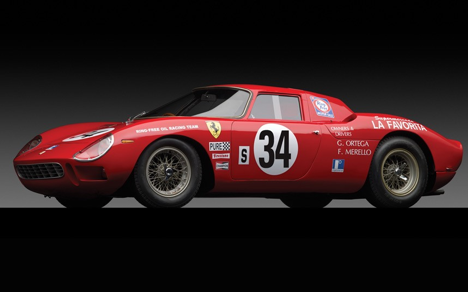 This 1964 Ferrari 250 LM (“incredibly rare,” the Telegraph gratuitously gushes) is one of 34 vintage cars going on the block this week at Sotheby’s in Manhattan.

The anticipated bid of $15 million is chump change by recent standards. James Grant, bow-tied editor of the newsletter that bears his name, points to a 1963 Ferrari 250 GTO that recently went for $52 million — half again as much as a record set last year, by another GTO.

“What constitutes a bubble for a nonyielding asset is difficult to say,” Grant writes. “In any case, the price does seem full.”

“The silly season is upon us,” suggests our own Chris Mayer.

To wit, you can soon buy a piece of a star athlete’s future earnings.

“A startup company announced a new trading exchange for investors to buy and sell interests in professional athletes,” said a recent New York Times story. “Backed by executives from Silicon Valley, Wall Street and the sports world, the company plans to create stocks tied to an athlete’s financial performance.”

OK, there was a hiccup coming out of the gate: The company, Fantex, planned to fork over $10 million up front to Houston Texans running back Arian Foster in exchange for 20% of his future football-related earnings. Then Foster suffered a season-ending injury. So much for that.

Rather than take the serendipitous opportunity to re-examine the concept, Fantex is forging ahead with a similar deal for San Francisco 49ers tight end Vernon Davis.

Or consider Twitter. As of this morning, it has a market cap of $22.5 billion. “This is for a company with widening losses,” Chris Mayer reminds us, “and no shot at a making a profit anytime soon.

“At least Twitter has sales. Pinterest, an online image sharing service, has no meaningful revenue at all. And Wall Street’s fancy pants value the company at $3.8 billion!”

And don’t forget the corporate junk bond market. “This,” says Chris, “is where the iffy borrowers go, and interest rates are high. In fact, it’s often called the high-yield market.

“But today, it seems just about every company has been able to borrow, or refinance, at record-low rates.”

This sector, too, is on Chris’ mind after attending the autumn Grant’s conference in New York. Among the speakers was the legendary investor Seth Klarman from Baupost Group. “Klarman finds the seeds of the next crisis germinating in the soil of the high-yield market.

“Klarman says that we don’t need an economic downturn for the next credit crisis. You just need higher or normal levels of interest rates. ‘[Then] all of a sudden,’ he says, ‘the junk bonds coming due in 2016 and 2017 will look like they can’t roll because there’s no replacement money at those yields. And at higher yields, the coverage won’t be there. I think it’s inevitable we have a junk bond crisis at some point down the road.’

“In plain English,” says Chris, “higher rates will mean borrowers won’t be able to refinance the huge debts they are taking now when they come due.”

What do all these silly-season sectors have in common? Or more to the point, who’s providing the fuel?

“Unprecedented money printing,” declares Jim Chanos — the guy who saw the fraud of Enron for what it was, and another speaker at the conference. “This is what’s new in the last 30 years,” he said during a retrospective on the bubbles of the last 30 years.

“Chanos showed a chart,” Chris recalls, “plotting the level of the Fed’s assets. The level moves steeply upward as the bonds bought pile up.

“I will do Chanos one better and show you a chart that plots not only the assets of the U.S. Federal Reserve, but also those of its ring of criminal associates in China, Japan, England and Europe. 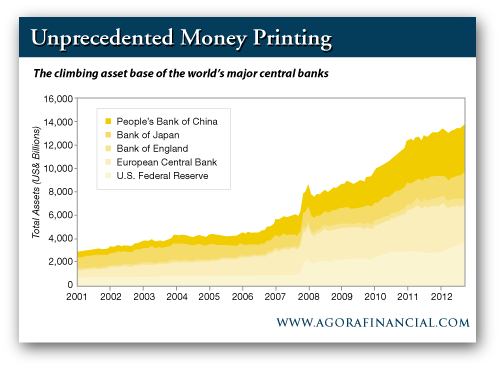 “With all that extra money sloshing around, silliness prevails,” says Chris. “As the central banks buy bonds, they put cash in the hands of the sellers.

“With interest rates so low, people get desperate in finding places to park it” — be it junk bonds or social media stocks or collectibles, or, God help us the future earnings of pro athletes.

So… how to invest based on this screaming huge macroeconomic trend? The improbable answer, Chris says, is you don’t.

Seth Klarman said as much at the conference: “Macro worries are a bit like sports radio,” he suggested. “Everyone has an opinion. They are all equally good, which means that none of them are very good.” You’re better off looking at individual companies and their balance sheets.

Boring, yes, but Klarman’s made a career of it.

So has Paul Singer, another investor with a sterling record. “Trading as if the world is always poorly managed and you can’t figure it out is right almost all the time,” he told the assembled crowd. “[However], never in my 37 years have I ever successfully timed a crash or a bear market despite having a pretty good sense for what’s going on in the world.”

“It’s too easy,” Chris sums up, “to wed yourself to opinions about the economy, the market, interest rates and the like — and let them dissuade you from taking advantage of great opportunities when they come. A certain amount of fear is necessary for long-term survival, but too much is paralyzing.”

[Ed. Note: With that in mind, Chris is keen on a play that can outperform traditional stocks by 300-500%. But you can buy it as easily as a traditional stock… and you’re actually taking on less risk by doing so.

These plays don’t come along often… and sometimes the doors can close with little warning. We encourage you to check it out right now. Unless you’d rather buy shares of Vernon Davis.]

Stocks are recovering a good chunk of the losses they took yesterday afternoon when minutes of the Federal Reserve’s October meeting were released.

The minutes were a snooze. But perhaps because they lacked the term “unprecedented money printing” as invoked above by Mr. Chanos, traders/junkies got fearful the Fed/their supplier would cut back on their precious liquidity/supply. The Dow tumbled more than 100 points.

[Ed. Note: It is our strict policy at The 5 to refrain from the no-longer-clever term “taper tantrum” to describe market action like that of yesterday afternoon. You’re welcome.]

Gold has not recovered its losses incurred after the Fed minutes. As we write, the bid is $1,241. Silver is mired below $20.

Gold actually took two hits yesterday — in the afternoon in New York and earlier, around lunchtime, in London. The earlier move was so violent trading was halted for 20 seconds — the third time that’s happened since September.

While certain websites fulminate about “manipulation,” we prefer to step back to examine the bigger picture…

“I’m not buying gold yet,” says the legendary commodities investor and veteran of our Vancouver symposium Jim Rogers.

“I know of no asset in history which has gone up 12 years in a row,” he tells Bull Market Thinking. “The bull market for 12 years was an anomaly, so the correction should be an anomaly too.

“As you may know, the Indian politicians are now trying to do their best to destroy the gold market. They’ve put on huge controls and taxes on the Indian gold market. India’s the largest buyer of gold in the world, and it’s already having an effect. So the Indians are now trying to figure out a way to make the Indians sell their gold. Now, if India goes from being the largest buyer of gold to a seller of gold — who knows how low the price of gold will go? I know it will go a lot lower.”

“$1,300 was a very important psychological and technical price level. As it stands, we can’t seem to get above it with a sustained rally or sideways trade — and without that, the pressure is pushing gold lower.

If you’re not reading Matt’s Daily Resource Hunter, you don’t know what you’re missing. Check out some of his recent issues and sign up to get it in your email at this link.

Reuters informs us the Middle Kingdom “has imported nearly a fifth more bullion than data from its traditional conduit Hong Kong shows as it brings in the metal via other routes.”

We bring you the Hong Kong import numbers each month; they are at best a proxy for Chinese demand, because bullion imports are a state secret.

Officially, imports via Hong Kong have totaled 855 metric tons during the first nine months of 2013 — nearly triple the year-ago figure.

But Reuters has crunched numbers from Global Trade Information Services and concluded at least 133 metric tons have been shipped directly to China.

“That figure could be even higher,” says the newswire, “as it does not include central bank purchases.”

No it does not: The People’s Bank of China has been mum on its gold accumulation since April 2009.

Another day, another stash of gold bars in an airplane toilet.

For the third time in two months, we get to chronicle the ongoing attempt to get around India’s import duties on gold, as referenced above by Jim Rogers.

This time, it’s 24 1-kilogram bars worth more than $1.1 million. “Cleaners found the haul in two bags on board a Jet Airways flight at Kolkata airport,” according to the BBC.

The twist this time is that the plane was incoming not from Dubai, but from Bangkok. Go figure. 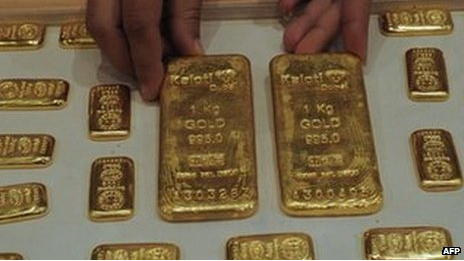 India’s duty on gold imports has risen from a token amount at the start of the year to 10% now — and 15% on jewelry.

No one’s claimed this stash. No one’s been arrested. And no one with a lick of sense thinks this will be the last such incident, heh…

P.S. Bitcoin is catching a bid again; at last check, the virtual currency is at $752.

And here come the competitors: “A ‘cryptocurrency’ craze has spawned more than 80 entrants,” today’s Wall Street Journal reports, “from peercoin and namecoin, to worldcoin and hobonickels.”

The spike in interest this week has prompted us to update our popular “Bitcoin Bible.” It lays out everything you want to know… and everything the government doesn’t want you to know. Learn how to get your free copy right here.