“An Army of Robotic Workers”

“Is Google gearing up to compete with Amazon’s flying drones for delivery services? Or was Jeff Bezos blowing smoke and mirrors when he announced his delivery service idea of using unmanned quadcopters?”

Those are the questions on the mind of our new high-tech specialist Stephen Petranek, former editor-in-chief at Discover magazine. On Monday, we quipped that Google has joined the military-industrial complex with its acquisition of Boston Dynamics. Today, Stephen joins us to suss out what Google’s up to.

“Some of the acquired firms make humanoid robotics, but others, like Industrial Perception, tend to develop traditional robotic arms.”

Boston Dynamics is a league apart from Google’s other robotics acquisitions. “It’s one of the most sophisticated robot developers on the planet,” Stephen declares.

“Boston Dynamics is the company DARPA and the military look to when they want a robotics problem solved. And Boston Dynamics has developed extraordinary autonomous robots like Wildcat (runs like a horse and carries gear), Cheetah (runs almost as fast as the cat it is named after) and the very spooky and way-too-humanlike Atlas robot.”

Man, he isn’t kidding about that last one… 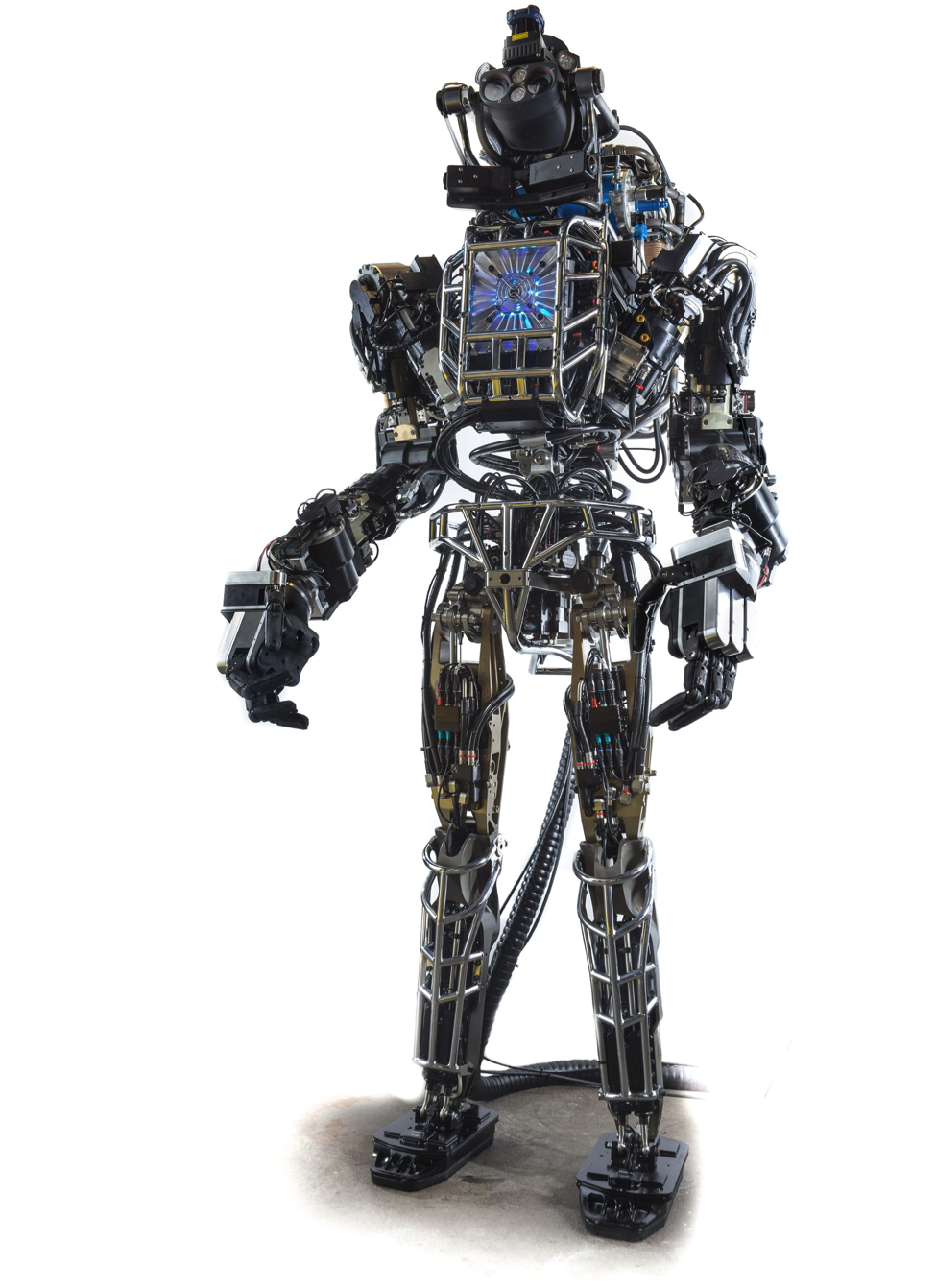 “Clearly,” says Stephen, “this is a major initiative not only because Google’s new robotics companies are the cutting-edge innovators in the field, but also because Google has chosen to head up its new robotics effort with Andy Rubin, the engineer who came up with the idea for Android, the most popular smartphone operating system, and then led it to success. The company says it is focused on delivery systems and industrial applications. And please note that Google already delivers packages for several major retailers in several American cities.

“Could a robot that delivers packages from a Google self-driving truck become the next United Parcel Service? Or are Google’s sights even higher? A study out of Oxford University predicts the United States could lose 45% of its jobs to robots in the near future. Does Google envision an army of robotic workers who don’t need health care and 401(k) benefits?”

“The CEO of a major bookseller who competes head-on with Amazon told me Saturday that he thought Bezos’ idea was a marketing trick. ‘It was just to draw attention to Amazon at the beginning of the Internet-buying holiday season,’ he said, smiling broadly.

[Ed. Note: Stephen’s first recommendation, issued on Nov. 12, is already up 60%. For access to our best bleeding-edge high-tech and biotech plays, look here.]

Stocks are drifting upward this morning as traders wait with bated breath for whatever the Federal Reserve decides today.

The Fed’s Open Market Committee will issue a statement around the time this episode of The 5 hits your inbox, and Ben Bernanke will hold his last news conference before he steps down as Fed chairman and starts collecting obscene fees on the lecture circuit.

The market-moving news this morning is a mixed bag: On the plus side, housing starts jumped 22.7% in November — way more than the “expert consensus” had figured. On the minus side, FedEx — a bellwether of the broad economy — delivered a big fat earnings “miss.”

“You can learn a lot from the ghosts of old bear markets,” writes Greg Guenthner in today’s Rude Awakening.

Greg is poring over a fascinating chart from one of his many contacts in the institutional-investing world. It compares the 1966-82 bear market with the bear market that began when the tech bubble burst in 2000.

Notice how the earlier bear market (the bottom chart) came to an end. “The 1980-82 breakout above the bear market highs was short-lived,” Greg writes. “My friend Jonathan Krinsky notes that the broad market corrected one final time back into its bear market range before finally breaking free for good — but only after posting one final low in 1982…” 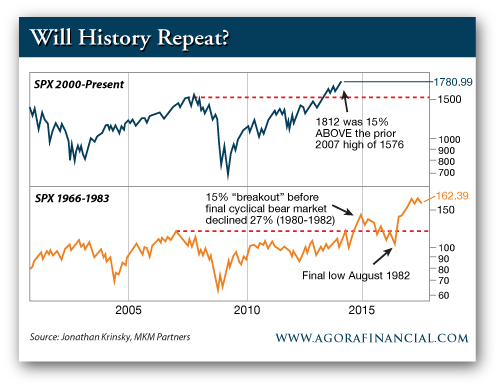 Only after that final low in ’82 did the market begin its epic 18-year bull run. “While not identical,” Greg writes, “the similarities between the current market action and the chart from the 1970s and early ’80s is striking. That high of 1,812 the S&P recently printed was 15% above the 1,576 bear market high of 2007.

“Of course, the market doesn’t have to follow this script. Sure, history tends to rhyme. But we’ll rarely see the exact same market action twice. I still see this market popping higher in the early winter before even thinking about anything resembling corrective action.”

Gold is little changed after a minor downdraft yesterday; at last check, the bid is $1,232. Silver is oscillating around the $20 level.

2013 was the year of silver coins… thanks to falling prices and India’s duties on gold imports, which drove many buyers into silver.

“The U.S. Mint, Royal Canadian Mint and the Perth Mint all reported extremely high sales of their silver coins,” says a summary from Kitco. We noticed a month ago when sales of U.S. Silver Eagles set an annual record, eclipsing the 2011 total; as of this morning, sales for 2013 total 42.675 million.

The Royal Canadian Mint updates its figures quarterly; through Sept. 30, sales of Silver Maple Leafs totaled 19.7 million. The annual record, also set in 2011, was 23.1 million, so Canada is also likely to set a new high in 2013. Down Under, the Perth Mint has sold 7.799 million ounces of silver through November.

The head of BTC China — the world’s largest Bitcoin exchange by volume — confirms to the Financial Times that his firm can no longer accept renminbi from Bitcoin buyers.

If you’ve given passing thought to “buying the dip” whenever it arrived, it’s here. If you still don’t feel comfortable with the ins and outs of Bitcoin, our Bitcoin bible answers all the big questions, and many of the little ones too. Learn how to get a free copy at this link.

Here’s a shock: “Private health insurance exchanges still are not able to directly enroll consumers in subsidized health plans offered through Obamacare,” CNN reports, “even though the government has said problems doing so should have been cleared up weeks ago.”

Yes, we’re floored too. CNN talked to executives from three online exchanges that contract with both insurance companies and government agencies. Not one said the system’s ready to go, government promises to the contrary notwithstanding. And these are the alternatives to HealthCare.gov and the state exchange sites!

“We can’t even start testing for a while yet,” says eHealth.com CEO Gary Lauer. “We’re still going through all of this. The stuff we’ve had up to this point has been junk, and that’s why I’m so concerned about this. It may not work.”

The slow-motion train wreck would be funny if it weren’t turning millions of lives upside down. If you’re among them — or if you suspect you’ll join their ranks sooner rather than later — we have a guide to help you prepare.

Impunity, thy name is Jamie Dimon.

The CEO at JPMorgan Chase recently mailed his family’s Christmas cards. “Like last year,” according to Quartz, “the card features Jamie, his wife Judy, their three daughters, a dog and a young man who we presume is a boyfriend or son-in-law.

“The cards are panorama photos; we’ve included close-ups of sections of them below the wide shots. And yes, Dimon and his family members appear multiple times in each panorama.”

Damn, it feels good to be a bailed-out bankster. If Dimon has any sense of gratitude, the card to Ben Bernanke was accompanied by a bottle of Dom Perignon White Gold Jeroboam…

“How does that work? Does a hedge fund manager go to the bank and say, ‘Seeing as how interest rates are so low, I want to borrow $2 million to buy stocks,’ and the bank says, ‘Sure thing’? Or does the bank buy the stocks for themselves? Or do low interest rates lead to higher demand for stocks some other way?”

The 5: It can definitely happen the first way you describe. Margin debt — the measure of how much market participants are borrowing to buy stocks — is now its highest since the Panic of 2008.

But more broadly, “Interest rates are the most important prices in the economy,” says Chris. “They are the raw material that goes into producing valuations of assets and streams of cash flow. Real estate assets, stocks and bonds all key off what interest rates are.” Lower rates, higher asset prices.

“If China wanted to harm Japan ,all they have to do is get Japan into an arms race,” a reader writes after we mentioned Japan’s plans to up defense spending.

“Japan has a debt-to-GDP ratio of around 225%. They make us look like fiscal conservatives. Over a decade ago, they decided to stop having children. They have been in a recession for almost a generation. To quote John Mauldin, ‘Japan is a bug in search of a windshield.’

“Not a good time in history to start an arms race for the Japanese.”

The 5: Reminds us of Hemingway’s description of how he went bankrupt: “Two ways. Gradually, then suddenly.”

“My local pub,” a reader writes with an on-the-ground report about the cost of living, “just raised the happy hour price for domestic beers from $2.00 to $2.50, an instantaneous 25% ‘price inflation.’ Stop the madness!”

It goes like this: PBR’s popularity has driven up its price, and there’s been a spillover effect into its low-priced peers. “I believe the single biggest driver in subpremium beer price increases is indeed specifically PBR,” Restaurant Sciences chief Chuck Ellis told the New York Daily News.

Blame Ben Bernanke, yes… but blame the bearded young dude in the flannel shirt at the next table, too.

P.S. Confidential to Reserve members: Check your inbox for your invitation to a members-only online event tomorrow night. It’s your chance to get in on the ground floor of a new industry set to go from zero — literally zero — to $300 billion next year.