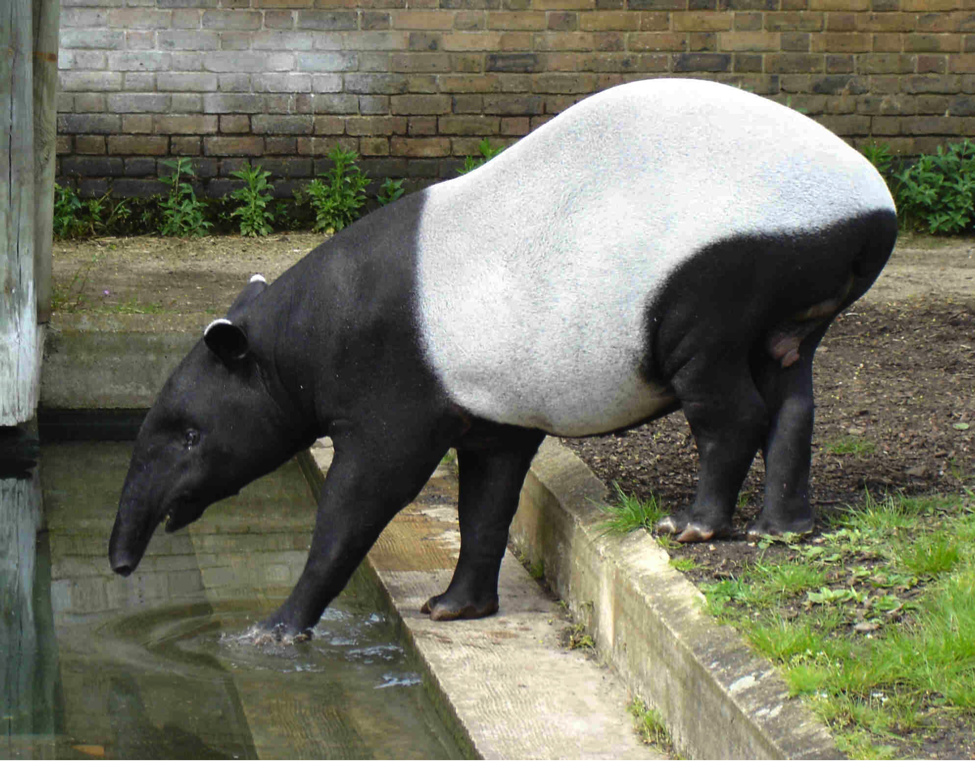 Arrival of the tapir…

Imagine for a moment you’re a heroin addict in Lower Manhattan. For the last year, you’ve been wracked with anxiety because…

And then, just as your current supplier was about to high-tail it outta town, he tells you he is indeed cutting back your supply — but only by about 12%. Yeah, you think to yourself, you can handle that. And he says any further rationing will be done in baby steps, depending on how bad your withdrawal pangs are.

You feel an immense sense of relief, an endorphin rush unlike any you’ve felt in, gosh, weeks. And overall, you haven’t felt this awesome in — forever! 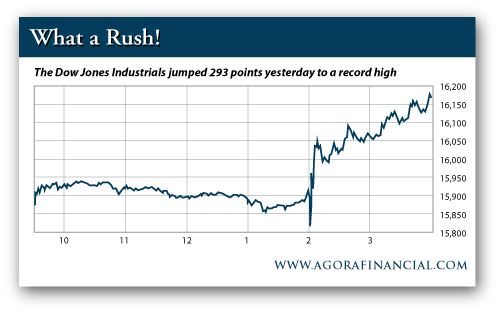 Currency Wars author Jim Rickards opted for a booze analogy, rather than heroin…

So here’s the deal: The Fed decided yesterday to “taper” its quantitative easing/bond buying/money printing. The current pace of $85 billion a month will be pared back to $75 billion a month, starting next month.

Rickards invoked a driving analogy in another tweet: “This tapering is like slamming the car brakes when you’re on ice. Car keeps going. They’ll still print $500 billion more before they’re done.”

Ominously, he suggested the reason the Fed opted to taper despite endlessly mediocre economic numbers: “The hidden costs of QE in terms of systemic risk, asset swaps & bubbles outweighed ‘stimulus.'”

Jeez, what a buzzkill…

To “make up” for the $10 billion monthly reduction, the Fed will offer more “forward guidance” — telegraphing its boneheaded intentions well in advance. As a start, the Fed doubled down on ZIRP, or zero interest rate policy.

Yesterday, the Fed declared rates will stay near zero “well past the time that the unemployment rate declines below 6.5%, especially if projected inflation continues to run below the committee’s 2% longer-run goal.” (Emphasis ours.)

“Gold investors who’ve bailed out on the assumption QE will eventually go into reverse, and the Fed will allow the money supply to eventually shrink, will find it necessary to return to the market. And new investors will seek shelter in the gold and silver from the ongoing, global blizzard of paper money — liquidity that will be seen as necessary to keep the global debt pyramid stable.”

But not this morning. The battle to hold the line on $1,200 is underway.

Gold took a mild hit when the Fed issued its announcement, but sank further overnight in Hong Kong. At last check, the bid was $1,196. Last time this happened, in late June, gold bounced back in short order.

The euphoria in U.S. stocks is wearing off; as we write, every major index is in the red, but only a little.

Yesterday’s celebration of the Fed decision spread westward across the globe. Japan’s Nikkei closed up 1.7% overnight. Most of the European indexes are up about 1.5%.

Well, there you have it: Even the most well-connected government insiders think the NSA has gone too far.

No, your “metadata” — whom you call, when you call, how long you talk — would still be collected under their recommendations. But the information would stay with your telecom provider, and the NSA would have to make a specific request to a court if the agency wanted to snoop further. Remarkably, the panel asserted that having the NSA vacuum up everything does nothing to prevent terrorist attacks.

In a way, the panel’s pushback isn’t a huge surprise. Consider…

NSA spying — bad for business. That was the gist of a meeting on Monday at the White House, when the CEOs of AT&T, Apple, Google, et al. met with President Obama.

Whether the president actually accepts the recommendations of the panel he appointed remains to be seen. Don’t let your guard down.

Then there was this curious entry in the panel’s report. We’ve highlighted (2) in particular… 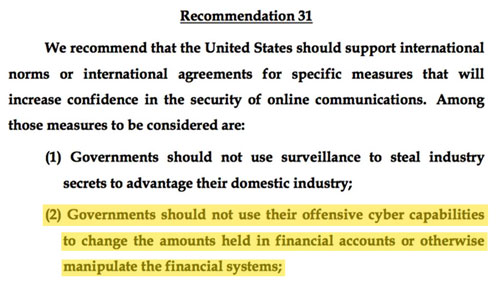 The president’s panel also made a recommendation that could unleash a new flood of investing dollars into cybersecurity.

The report made clear the NSA should stop deliberately undermining the encryption standards that are supposed to protect your privacy online.

Back in September, one of the Snowden documents revealed the NSA was colluding with technology companies as long ago as 2000 to degrade the firms’ encryption protocols, so the NSA could more easily monitor “secure” Web traffic — including, say, the times you log in to check your bank or brokerage account or your Gmail.

The panel declared the U.S. government should not “in any way subvert, undermine, weaken or make vulnerable generally available commercial software.”

We suspect the president will accept this recommendation. It fits right in with an idea we’ve been kicking around the office. We’ve playfully dubbed it “Obama’s secret war.”

Remember what we said when this encryption story came out in September: If it’s easier for the U.S. government to crack encryption codes, it’s also easier for foreign governments. Or terrorists. Or run-of-the-mill cybercriminals.

Team Obama has probably figured out NSA policy going back 13 years has been sheer folly. Result: a flood of new money to fortify the cyberdefenses the NSA purposely weakened. It’s all of a piece with “Obama’s secret war” — a conflict waged worldwide, but in the shadows.

With the NSA panel’s report coming out yesterday, we’ve decided to pull the trigger and schedule an “Emergency Summit” laying out the profit opportunities, which could be of the quadruple-digit variety. This is a live online event we’ve scheduled for Monday, Dec. 30.

We’re sure you have holiday plans, so we wanted to give you ample time to get this event on your schedule, but not wait too long before the profit potential slips away. The event is completely free; for all the pertinent details and to sign up for access, click here.

“You remember 2008, right?” inquires our income specialist Neil George. “Well, if you don’t, I’m sure that your portfolio does.”

Neil caught sight of a recent Fed report showing total U.S. household wealth now totals $77.3 trillion — only 1% lower than it was before the 2007-09 recession began. “That includes investments, savings and properties, of course. And according to the Fed, $917 billion of that was made back in stocks, while some $428 billion came from higher home prices.

“Of course, to be part of the recovery, you had to stick it out and remain engaged in the markets and in real estate. For many, that was a tough — if not gut-wrenching — thing to do, especially as the markets continued spiraling lower until finally starting to turn around in February 2009.

“And for investors living off their investments, it was also a challenge to pay themselves less from their portfolios to stay more invested and re-invested in the market.”

A better alternative during that episode: dividends.

“Remember,” says Neil, “from the beginning of 2008 to date, the general stock market — with its average dividend running around 2% — has just barely made a return of some 45%. But you could have done much, much better focusing on dividend-paying stocks.”

One of Neil’s favorite recommendations has spanked the S&P 500’s performance by 146% since 2008. And along the way it’s paid a monster 10% dividend yield. “Plays like these,” says Neil, ” buy a lot of confidence that will empower you to be able to ride through the next market downturn when — not if — it comes.”

“Judging from the photos,” a reader writes after yesterday’s episode, “it seems JPMorgan Chase CEO Jamie Dimon has a lot of balls. (Does a double-entendre meet the ‘Presbyterian standard’?)”

The 5: For the uninitiated, the Presbyterian standard is a guideline set out long ago by Agora Inc. founder Bill Bonner: If the writing isn’t something you’d feel comfortable showing to your mom, it’s probably over the top.

As it happens, double-entendres are one of our favorite ways of hewing to the Presbyterian standard…

P.S. Congratulations again to Options Hotline readers. This time, Steve Sarnoff’s money-doubling recommendation was a call option on Disney, issued barely a month ago, on Nov. 10.

Since then, Disney shares have risen 7%… and Steve’s recommendation has jumped 114%. This morning, he recommended taking profits.

A play like this one is exactly what our publisher had in mind when he made an unprecedented guarantee to new subscribers. Learn how to take advantage at this link.