Yesterday, the FAA got off the dime and took a huge step in the advancement of drones — “the good drones,” if you will, the ones for nonmilitary, nonsurveillance uses. After 10 months, the agency settled on six sites where commercial drones will be tested next year and into 2015. 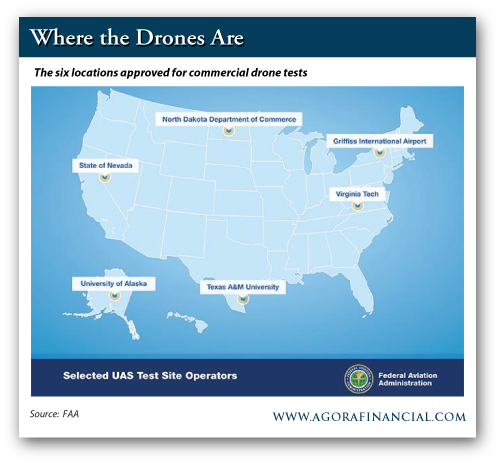 We’ve been on to the possibilities of commercial drones ever since our talk earlier this year with Makers author Chris Anderson. He built the first Lego drone with his kids in 2006; it’s at the Lego museum in Denmark. Now he runs 3-D Robotics, a manufacturer of drones in San Diego and Tijuana.

To date, his firm has limited its output to aircraft that fly under 400 feet — below the FAA’s jurisdiction. “We don’t sell to the military,” he told us, “we don’t sell to the government; we sell to regular people, and we hope that they will find applications and, in a sense, recontextualize what drones are for and change the definition of drone, at least the public perception, from military weapon to useful tool that we see every day doing something nonthreatening.”

“There are plenty of uses for a persistent, low-cost, self-guided eye in the sky,” Ray jumps in to explain. “We’re already using them, such as to remotely check pipelines and nuclear power plants, as Japan did after the earthquake and tsunami.

“Another recent example is the use of drones for protecting populations of endangered animals. In Africa, drones are watching for poachers looking to illegally take endangered elephants, rhinos and other big game. In agriculture, UAVs will be used to monitor fields and herds. And really dangerous jobs like crop dusting will eventually be taken over by drones, something that’s already happened in places like Japan.

“Meteorologists will keep a better eye on dangerous weather systems, something people who live in the path of hurricanes and tornadoes will appreciate. We’ll also be able to detect the outbreak of forest fires earlier, improving our odds of stopping them before they grow too large.”

By one estimate, commercial drones stand to be a $400 billion business by 2017. Only days ago, Ray recommended a “pure play” in the sector to readers of Technology Profits Confidential. For access to our entry-level tech newsletter — backed by a one-of-a-kind offer we promise you won’t find anywhere else — look here.

Three weeks ago, the Energy Department reported the Marcellus shale region of Ohio, West Virginia and Pennsylvania is on track to supply 18% of total U.S. natural gas production during December.

The industry has ramped up to an entire new level of productivity: “The same number of rigs are drilling more wells,” Byron explains. “That comes with improved learning curves and better efficiencies based on experience in the field.”

The shale revolution isn’t only delivering new sources of energy; it’s also producing more income in the shale patches that dot the land.

Byron passes along a staggering map gleaned from Census data. The counties in green are the ones where median household income actually rose from 2007-12, recession be damned. Check out all that green in North Dakota’s Bakken country… 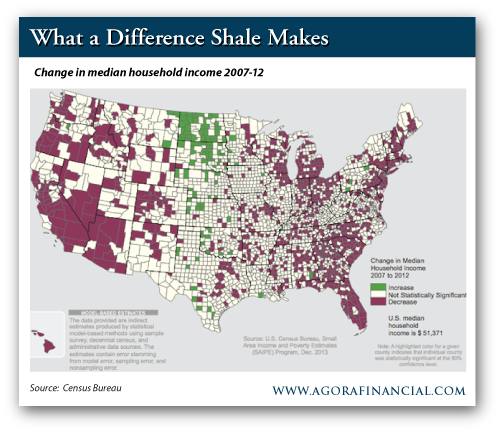 “Five years of fracking,” Byron muses, “and look at the ‘poor’ parts of North Dakota, Texas and even a few counties in Pennsylvania.”

2014, Byron projects, is the year the shale revolution goes international. “Soon in Mexico. Perhaps in Europe, and then Africa, the Middle East, China, South America and more.” Stay tuned…

Major U.S. stock indexes are set to end the year in record territory. As we write, the Dow is up to 16,557.

“Mr. Market’s price action has been nothing if not orderly,” says our Jonas Elmerraji, reviewing the S&P 500’s performance — starting with the bottom near 1,350 on Nov. 16 last year. At last check this morning, the index is within three points of 1,850. 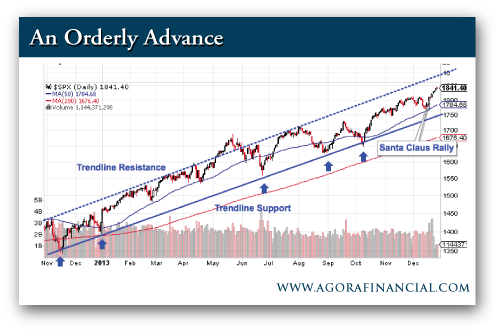 “Despite all of the buying activity of the last year, the big index has managed to keep all of its price action within a very nicely defined price channel. The most recent attempt at coming back down to support got thrown off by the ‘Santa Claus rally’ that’s been propelling the market for the last handful of trading sessions.

“That really sets the stage for the correction that we’ve been anticipating in January.”

[Ed. Note: The methods Jonas applies to his analysis are the same “predictive” tools the NSA uses in its spycraft. To date, they have an 86.7% “hit rate.”

Jonas recently spilled his trading secrets — affording you the chance to rake in gains of $2,571 or more in a single week. You’ll find his exclusive expose at this link.]

“For the smallest thing, they wanted a receipt,” recalls the storekeeper in Timbuktu — the city in the nation of Mali that’s synonymous with the middle of nowhere.

“They” were fighters for al-Qaida’s faction in West Africa. For them, indeed, for all of al-Qaida’s far-flung franchises, no expense is too small to go unrecorded.

Our final excursion into financial “quirk” in 2013 will go rather far afield, dear reader. Strap in…

“The often tiny amounts are carefully written out in pencil and colored pen on scraps of paper and Post-it notes,” reports The Associated Press: “The equivalent of $1.80 for a bar of soap; $8 for a packet of macaroni; $14 for a tube of superglue.

“This habit, they say, can be traced back more than three decades to when a young Osama bin Laden entered King Abdul Aziz University in Saudi Arabia in 1976 to study economics, and went on to run part of his millionaire father’s construction company.”

We’re not at all surprised. In May 2011, only hours after he was killed, we dared to suggest bin Laden executed “the most brilliant leveraged bet in history.”

The Pentagon has no fewer than 2,100 accounting systems spread across the armed services and various agencies. Few of them are capable of talking to each other.

Said Defense Secretary Donald Rumsfeld the day before the Sept. 11 attacks: “According to some estimates, we cannot track $2.3 trillion in transactions.” Since then, the number has swelled to about $8.5 trillion, dating back to the 1996 deadline.

In 2009, Congress “got tough” and imposed a new cross-your-heart, hope-to-die deadline for the Pentagon to be audit-ready: 2017.

Alas, there were no “or else” consequences attached to this deadline. Thus, according to Reuters, “many of the costly new systems don’t work. Several were canceled outright as failures after amounts exceeding $1 billion were spent on each. Others were finished but fall well short of performing intended tasks. Several crucial systems are far behind schedule, making it unlikely the deadline will be met.”

Maybe they should try scraps of paper and Post-its…

“I just had to add my two cents worth on wood heat,” writes a Canadian reader. “I am from Northern British Columbia. My grandparents (and everyone else around) used wood heat only. It was all they had. They lived mostly a subsistence existence. The good part: No one could take it away from them.

“Natural gas would have been just an unnecessary bill. They did have propane in the later years for the fridge and water heater. At this point, they were living large. Wood was inexpensive and available. Why use anything else?

“I was a third-generation (and last-generation) logger, and wood was available and free, so we always used wood as well. We were, of course, surrounded by forests. I live in Alberta now and still burn wood, though it is a little harder to get.

“Like the one reader said, it warms you twice. Actually, it warms me many times. When I fall the trees, when I cut them up, when I throw them in the truck, when I unload and stack, when I chop and haul in the house. It is very labor intensive, but great exercise, and I will do it as long as I can.

“If the terrorists shut down the gas flow, if there is an ice storm and no power for weeks, if I am just too broke to pay my bills, we will still have heat.”

“I used to heat my log house with wood from October until mid-April,” an American reader chimes in — “the curse of living in the Northeast. Ten face cords of wood at $70-75 for the whole season? Can’t beat that.

“Always had next year’s wood ready and drying out over the winter and summer seasons. Yes, you have to do some work and move it a few times, but it makes for a nice heat in the house. And if/when the power went out? I was warm, could heat up food if I had to and had some light in the living room.”

“One more thing,” adds another reader: “In terms of the carbon cycle, burning wood would seem to be carbon neutral, but actually, burning the wood is better than carbon neutral because the alternative of letting it rot and having the bugs eat it emits methane, a greenhouse gas much worse than carbon dioxide.”

The carbon-neutral thing is absolutely true, if that matters to you. “When a tree is growing,” self-sufficiency author Cam Mather writes in Thriving During Challenging Times, “it uses photosynthesis to store carbon, extracting carbon dioxide from the air. When the tree dies, it releases the carbon it stored while growing, making it ‘carbon neutral.’

“As you know, your commentary and editorial position make me think,” writes our final contributor of 2013. “And not always agree with you or accept what you explain without a few questions and observations.

“But I would like to say thank you for keeping the candle burning. I can tell from the continuous publication of The 5 Min. Forecast that you have not let up for a day. Or at least you have organized your group to make things appear that way. And that’s alright with me too. It’s probably a lot of hard work. Your readers should know. Many of them jump to their keyboards to respond to you and probably feel like hiding in Afghanistan when you correct their assumptions.

“It’s not really easy to lay out a story and have your facts laid out coherently. You guys work hard to develop your stories, research them and defend them. Keep up the work and don’t take any wooden nickels.”

The 5: Many thanks. Fortunately, we have a thick enough skin that we’ve never felt compelled to take refuge in the Hindu Kush…