Whatever Happens, Don’t Call it Fraud

Uhh… guys, can we make up our minds here?

As you were rubbing the sleep out of your eyes this morning, Bank of America (BAC) let it drop that it lost 5 cents per share during the first quarter. Whoops, that’s a “miss” in the expectations game — the Street was looking for earnings of 5 cents, not a loss.

But wait! That’s just an accounting glitch. Throw out the ever-popular “one-time adjustments” and earnings work out to 35 cents a share — beating the consensus expectation of 27 cents.

The adjustments in this case are for $6 billion in litigation expenses — “showing how Bank of America is still paying for its mortgage missteps nearly six years after the financial crisis,” as The New York Times put it.

Presumably, that $6 billion includes the $15 million BAC is paying to cover for former CEO Ken Lewis’ lies — er, excuse us, “misstatements” — about the acquisition of Merrill Lynch in 2008.

Traders find the numbers indicating a loss more credible; BAC is down 3% this morning, while the rest of the financial sector is slightly in the green. Heh…

We mock the expectations game that comes with earnings season. But as we explained last Thursday, you can play earnings surprises for big gains in a brief span of time.

To explore a recent example, we revisit a little history…

Micron is one of the more unusual Silicon Valley stories from the 1980s — not least because it’s located far from Silicon Valley, in Idaho.

Founded in 1978, the startup got a huge boost in 1980 when the Idaho potato baron J.R. Simplot took a stake in the firm. Simplot was the guy who figured out how to freeze a french fry and wound up selling gazillions of them to McDonald’s.

Success with Micron came only after Simplot exhausted his ready venture funds and dug deep for what he called “our real gambling money,” ultimately sinking $30 million into the firm. “We were sure pawing the air for a while,” Simplot recalled in George Gilder’s book Recapturing the Spirit of Enterprise. “It was touch and go.”

But it all worked out: Between Micron and the potatoes, Simplot was the oldest billionaire in the Forbes 400 when he died in 2008 at age 99.

Today, Micron is one of the heavy hitters in the semiconductor space, with a $23.5 billion market cap and 30,000 employees.

Last year, Micron was a top performer in the S&P 500 — more than tripling its investors’ money. And it all began in late 2012… 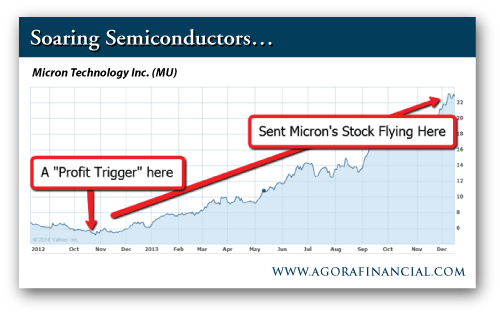 As we’ve explained the last few days, “Newton Profit Triggers” are any kind of catalyst that propels a stock in a big way in a short amount of time. Rick’s spent the last decade chasing them down in his own portfolio — after he walked away from a seven-figure Wall Street salary.

Over the years, Rick has identified five types of these profit triggers — No. 3 described here is a “surprise” earnings announcement — the kind that’s not really a surprise to an analyst who understands a company’s competitive landscape.

Tomorrow at 1:00 p.m. EDT, Rick will share all five of these profit triggers with you… and show you how to generate your own 347% gains in mere months. To make sure you’re the first to be clued in, all you need to do is sign up here.

Stocks are enjoying a hump-day rally so far today. As we write, all the major indexes are up about a half-percent, the S&P 500 at 1,851.

Traders are chewing on a mixed bag of economic numbers — industrial production during March was stronger than the Street expected, but housing starts missed.

China worked its own magic in the expectations game this morning.

First-quarter GDP rang in at an annualized 7.4% — “just above analyst expectations in a Reuters poll for a 7.3% increase,” CNBC reported excitedly.

Man-made or otherwise, the number should have sparked an emerging-market currency rally, and it didn’t.

“You should only believe about half of what the Chinese print for data,” EverBank’s Chuck Butler reminds us in this morning’s Daily Pfennig. “Which means even if we’re being stringy here that China, while slower, is still outperforming the rest of the world! I’m not making excuses for them here. I told you that in the first quarter the economy troughed. So in three months, we’ll find out if that was true!

“Unfortunately for the renminbi/yuan, the Chinese saw these weaker reports as an opportunity to weaken the currency overnight.” At last check, it took 6.2214 yuan to equal one U.S. dollar.

“Moore’s law is rapidly becoming outdated,” says our Byron King, taking us back to semiconductors this morning.

Byron is treading close to the territory staked out by our tech team… but he reached his conclusion last year while scouting out an intriguing play for his Military-Tech Alert readers.

Moore’s law, you’ll recall, says computing power doubles every 18 months or so. “This has been the case for nearly 50 years, based on silicon,” says Byron. “It’s why you have iPads instead of big, clunky desktops; or flat-screen TVs instead of big old tube sets; or an iPhone instead of an old ‘brick’ telephone.”

The problem now? “Silicon is approaching fundamental atomic limits for pushing electrons around. You can only make silicon chips only so small. Then the electrons start bumping into each other, so to speak.”

Enter the next generation of semiconductors. “Think of complex electronic systems,” says Byron.

“They’re made up of different kinds of circuits, all wired and soldered together, sucking power, requiring cooling and taking time to communicate with each other. Except now you can combine multiple tasks onto one low-powered chip. Much of the heavy lifting in terms of signal processing is done with coherent photons, better known as lasers — nanolasers, actually.”

One company is on the forefront of these game-changing semiconductors. The share price has grown fourfold so far this year, and it’s withstood the swoon that’s taken down so many other tech names. “Obviously, if you jump in now, you’re buying on the upside of momentum play,” Byron advised his readers yesterday. “Then again, I believe the momentum is still there.”

With income tax season behind us, we turn our gaze this morning to beer taxes.

“There isn’t much consistency on how state and local governments tax beer,” says a report from the Tax Foundation that your editor carelessly overlooked until my better half brought it to my attention yesterday. 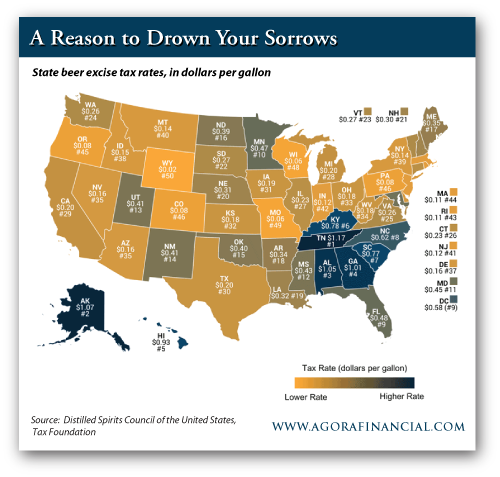 “Taxes are the single most expensive ingredient in beer, costing more than labor and raw materials combined,” according to the Beer Institute. “If all the taxes levied on the production, distribution and retailing of beer are added up, they amount to more than 40% of the retail price.”

Note that includes the sales tax. Which does not figure into the map above…

“Will it be possible to get a replay of Rick Pearson’s presentation tomorrow at 1:00 p.m. EDT?” a reader inquires. “I expect to be at a meeting at that hour.”

The 5: Yes. If you’ve already signed up, you can click the link anytime after 1:00 tomorrow. But we have only a limited number of spots available, so we urge you to watch as soon as is feasible.

“I found your item on drones interesting,” a reader writes. “They may be really useful in everyday life, but nobody is addressing the use of these same drones as instruments of terror.

“I am going to try one more time to wake people up on this issue. These are the perfect terrorist weapon. Put a 4- or 5-pound block of C-4 or any explosive on a drone and it can strike anywhere almost undetectable. Imagine the chaos if three or four were aimed at a stadium full of sports fans or a nuclear reactor.

“At night, there is nowhere that these things cannot get to. These are not the huge drones with wings but the type that Amazon plans on using to deliver packages to your front door. They could park them on a plane when it is still on the airfield and no one would know. These people are not stupid. They are most likely planning their next strike using drones.”

“So,” a reader writes after yesterday’s episode, “the Social Security Administration says it will stop the recovery of supposed overpayments over 10 years old.

“Since they were using the Treasury Department to intercept tax refunds, isn’t it interesting that they made the announcement a day before the tax deadline?

“So anyone expecting a tax refund would have most likely already filed and had their refunds intercepted.

“There was no recourse in the announcement for those who had their tax refunds intercepted, except to ‘seek options to resolve the overpayment.’ Not much good news there, unless you waited to file (whether or not you had any idea the SSA was after your money).

“Yes, I too am a victim of a supposed overpayment, from 1979. Nothing like getting a letter 35 years in the making stating that your money was taken, and you had no choice in the decision.

“Thanks for the info. I always get something good from your writing.”

The 5: Yowza. Our sympathies…

“If the government can collect taxes from the relatives of deceased taxpayers,” another reader muses, “what about allowing citizens to recover some of their tax money from wasteful and fraudulent government agencies?

“I’ll bet there are hundreds of folks willing to go in and audit such agencies and get paid a percentage of what they find.”

The 5: And you’re going to recover the money from… where, exactly?

P.S. We’re about to dash to our first face-to-face gathering of all the Agora Financial editors in… well, too long. It’s a two-day affair that will take this editor out of circulation tomorrow; Chris Campbell will take the 5 helm, and I’ll send along an update from the meeting as time allows.

We look forward to getting better acquainted with all the new folks who’ve joined our team in recent months to help us “up our game” in finding you the best investing opportunities out there — including the “Newton Profit Triggers” Rick Pearson is so keen to share.

We’ll send you one more reminder email, but you can ensure access to his briefing tomorrow at 1:00 p.m. EDT by signing up at this link.