And so the litigation begins.

On Friday, the city of Providence, R.I., sued Bank of America, the New York Stock Exchange and 40 other defendants in a lawsuit over high-frequency trading (HFT).

Well, give the city’s legal team credit for timing: Nothing like going to court less than three weeks after the publication of a book bringing HFT to mass consciousness — Michael Lewis’ bestseller Flash Boys.

“In addition to destroying trust in the U.S. capital markets,” reads the city’s complaint, “the misconduct alleged herein has siphoned off billions of dollars from private and public pension funds and individual retirement accounts that millions of Americans depend on.”

Are the managers of Providence’s pension fund unaware of the five words they can use to insulate themselves from the flash boys’ relentless efforts to “steal pennies” off everyone else’s trades?

We don’t know if they’re that clueless. But we do know you don’t have to be. We want to arm you with knowledge. We want to send you a hardcover copy of Flash Boys for $4.95… along with a special report called Five Simple Words to Beat the Flash Boys. Tell us where to ship the book… and we’ll send you a link to the report so you can download it right away. Don’t wait to act — we have only a limited number of books to unload at this ultra-low price.

Stocks are flat as a new week begins: The only movement to speak of is in the Russell 2000, down about a third of a percent. 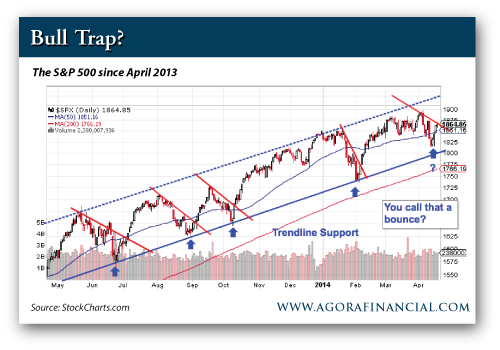 “In other words, it doesn’t look like a bounce yet — more like a bull trap.” Jonas’ STORM Signals readers continue to sit on the sidelines, as they have for a month now.

“Every bull market is made up of different ingredients,” says Paul Mampilly — our newly named investment director here at Agora Financial.

That doesn’t sound like any great revelation — until someone tries to sucker you in with a “surefire” market indicator.

“The gloomers are competing to find a way to show you the market is overvalued using newfangled methods with names like CAPE — which stands for ‘cyclically adjusted price-earnings,’ also known as the Shiller P/E.

“The optimists have struck back with one of their own,” says Paul — the rule of 20. “This method of valuing the market says you take the S&P 500’s P/E ratio and add inflation. If this magic number is below 20, you buy. If this number is above 20, you sell.

“Neither calculation means anything,” says Paul. “At least not anything useful, anyway.”

Before you throw up your hands in disgust and click out of today’s episode, hear Paul out: “Let’s start with CAPE. If you use that measure, you would not have bought stocks at the bottom in March 2009. And this measure has kept you out of stocks for the whole bull market that has followed. What good is a system that keeps you out when stocks are going to double? No good at all.

“What about the rule of 20? Unfortunately, as neat as that rule sounds, it’s pretty bogus too. Here’s why. At the end of 2008, more or less the beginning of the biggest bull market ever, the P/E plus inflation rate was well over 70. But stocks were still a buy. Well, then what good is a system that keeps you out of the greatest bull market in history? No good at all.”

Which brings us back to Paul’s maxim, drawn from 25 years of experience: Every bull market has different drivers.

“I believe the current stock market boom is driven by two things,” says Paul: “People buying stocks for dividends and companies buying their own stock.

“For me, that means the stock market keeps going up (not in a straight line) as long as these two things keep going.

Buybacks, as it happens, are one of Chris Mayer’s favorite ways to pump up your portfolio: For the last decade, he’s been spotting them for Capital & Crisis readers… and racking up a track record better than most fund managers. Buybacks make up a critical component of Chris’ one-of-a-kind “coffee can portfolio” — which you can examine right here.

Starting last month, driving the interstates on the southern side of the Kansas City metro area became a daily exercise in danger: A gunman carried out at least 12 attacks on drivers. No one was killed, but three were shot — all by the same .380-caliber weapon.

On April 9, a woman told police she’d had a freaky encounter with a man in a green Dodge Neon, thinking she was being followed. Nothing came of it… but she got the license plate number.

“Investigators plugged the plate number into a database for license plate readers,” reports the Los Angeles Times. “Kansas City police have such automatic readers installed on their cars. Such readers photograph license plates and log the time, location and date of the encounter, feeding millions of plate numbers into a massive database that has drawn criticism from civil liberties advocates as a potential invasion of privacy. The scanners record any plate they detect, not just those potentially linked to wrongdoing.”

The following day, a police cruiser’s reader logged the plate again. They started staking out Whitaker, spotting him trying to buy a gun and also following other cars erratically.

It’s not just police cars equipped with readers: So are legions of repo men. Still other cameras are mounted on road signs and bridges, capable of identifying and logging up to 1,800 plates per minute.

Yeah, it’s creepy as hell: If they can track down a suspect in a string of highway shootings, they can also track your visits to the gun range or a tax protest. “Now the government routinely collects vast troves of data about hundreds of millions of innocent people, casting everyone as a potential suspect until proven innocent,” says the ACLU’s Kade Crockford.

The database? That’s maintained by a privately held company called Vigilant Solutions; it’s meeting considerable demand from local, state and federal law enforcement. One agency — Immigration and Customs Enforcement — has paid Vigilant $175,000 over the past four years. One contract was for a project called “Operation Blind Squirrel.”

As in even a blind squirrel finds a nut now and then? That would be Mr. Whitaker, apparently.

Graphene in a blender?

Our favorite miracle material, chronicled in our virtual pages for nearly three years now, can now be made in the kitchen, it seems.

To refresh your memory: Graphene is made from graphite — a variant of the lowly carbon atom. “A sheet of [it] stretched over a coffee cup could support the weight of a truck bearing down on a pencil point,” said The New York Times in 2010.

From the AFP newswire comes word of a manufacturing breakthrough by English and Irish scientists: “They placed powdered graphite, the stuff from which pencil lead is made, into a container with an ‘exfoliating liquid,’ and then mixed at high speed.”

In a blender. We’re not sure if it was set to “puree” or “liquefy.”

Our Byron King continues to follow the fortunes of a graphite miner that’s onto its own process of making graphene. “We’re looking at a low-cost producer,” he told readers of Real Wealth Trader last week, “with high-end, profitable downstream operations. The news comes routinely, and it’s all good.”

“I think the SS action is just living up to their initials,” a reader writes of the Social Security Administration’s moves to intercept tax refunds, the better to collect decades-ago overpayments to the parents of taxpayers.

“And,” he adds, “it will encourage individuals to file W-4s with their employers with as many exemptions as possible so that they will not get a refund, therefore not worrying about confiscation of their refunds for any made-up excuse.”

The 5: Probably. And even though the Social Security Administration’s decided to stop intercepting refunds, as we mentioned last week… the law authorizing it to do so is still on the books.

And don’t forget an added incentive to avoid a refund — the fact that under current law the IRS has no way of collecting the Obamacare tax/penalty/whatever other than by intercepting refunds.

“My daughter,” a reader writes, “has been assigned the task of arguing, ‘Is the conversion to alternative fuels/energy important?’ I’ve been reading The 5 for a couple of years now; I can tell her things, but I don’t have any of the sources that she can reference.

“Can you or one of your writers send me where you get some of your information regarding this topic?”

The 5: “Important” to whom? Investors? Politicians? Drivers? Electricity users? We pity your daughter if the assignment is that vague.

We consulted Matt Insley of our energy team, who says he has no single go-to source for alternative energy information. He suggests the website of the Energy Information Administration might be a good start…

P.S. One of the big stock market movers last week was Digital Power Corp., a maker of industrial power supplies. It shot up 35% in a day… on no news.

The company was moved to put out a press release stating that “its policy is not to comment on unusual market activity.”

Not exactly the sort of thing that inspires confidence, eh? (As we write this morning, it’s down about 3%.)

Most of the time, big one-day moves like this do have a reason… and Rick Pearson, one of the new additions to our team, has a proven track record of spotting them in advance. He’s been doing it for a decade… and he’s identified five catalysts that usually drive these big moves.

“Newton’s Secret Profit Triggers,” he calls them. We wrote about them last week in the run-up to a new presentation he prepared just for you. If you missed it when it was released, you can watch it here right now.

In developing a strategy for dealing with Beijing, Joe Biden says he’s in no rush to drop the Trump tariffs on China. Read More