From Baghdad to the Baby Bakken

“Once widely held expectations for a doubling or even tripling of Iraqi oil production in coming years likely need to be scaled back,” according to a MarketWatch roundup of “expert” opinion.

Gee, from Byron King’s lips to the establishment media’s ears. Only yesterday, he mused in our virtual pages about “experts” a few weeks ago at a London conference looking forward to growing Iraqi oil production.

Suddenly, the tune is different: “Any long-term forecast that says oil prices will be $90 or even sub-$100 needs Iraq to produce at 6-8 million barrels a day, if not higher,” says Amrita Sen of the firm Energy Aspects.

Whoops, nowhere near: Iraq’s “postwar” oil production peaked in February at 3.6 million barrels a day, according to the International Energy Agency. 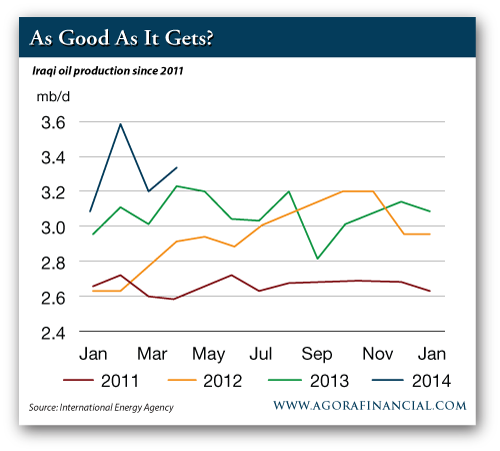 Most of the major fields are out of the line of fire… at least for now. “But with no other country set to achieve anywhere near the production increase forecast for Iraq, the $110 a barrel mark may remain a near-term floor,” MarketWatch avers.

“Thank God for fracking!” Byron muses further today, turning his attention to America’s new energy bounty. “Without fracking and the oil and gas it produces, the U.S. and its economy would be totally screwed.

“Of course, just pressuring rock with fluids — classical ‘fracking’ — has been around for nearly 70 years. But horizontal drilling now makes it possible to expose many thousands of feet of hydrocarbon-bearing rock to the magic of super-high pressure.

“It’s complex technology, and not all that many companies can make it work. When you step back, new technology includes better computers, software and algorithms. Better math, physics and geophysics. Better directional control. Better drill bits. Better drilling fluids. New power technology, such as ‘top drive’ drilling systems. Better metallurgy for drill pipe, and even ‘coiled tube’ drilling with metal that bends more easily than you might suspect. Better valves and pressure control. All that, and more.

“It’s the right tech at the right time in history. Just in time, as things are turning out.”

And as Byron is wont to say, it’s highly investable.

“There’s a lot of reason to think that Colorado’s Niobrara Shale play is the next big play in the U.S.,” chimes in Matt Insley of our natural resources desk.

The Niobrara is one of several overlapping plays Matt has taken to calling the “baby Bakken.” And he’s dug up the numbers to back up his claim. “A simple look at the cold, hard facts and you’ll realize productivity and production in the Niobrara are starting to move the needle. 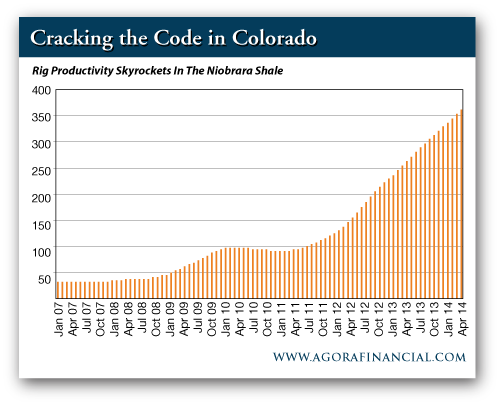 “Per rig ‘productivity’ dawdled in 2007-11. An average of 100 barrels per day per rig isn’t going to make anyone rich (at least not at today’s oil prices and well costs). However, since July 2012 or so, drillers have started to crack the code in Colorado’s Niobrara.”

In fact, Niobrara’s growth rate exceeds that of the two “big name” U.S. shale-oil plays: North Dakota’s Bakken and Texas’ Eagle Ford. But in a sense, location no longer matters, says Matt. “The story is evolving. It’s much more than just knowing where the next big shale play is. You’ve got to execute. That’s what separates the winners from the losers.”

[Ed. note: Matt and Byron have done a fine job in recent months of identifying winners that can execute. Now they’re out to line up 100 “wildcatters” like you — folks looking to double their money playing America’s shale boom… in only 36 days.

That’s exactly what some of our readers did earlier this spring… so we know it can be done. Let Matt show you how you can get started before the end of this month… and perhaps bag your own money-doubling play by early August. See for yourself, right at this link.]

The major U.S. stock indexes have erased yesterday’s modest losses; the S&P 500 is up three points as we write, to 1,940.

After two years of huffing and puffing, the Federal Reserve has achieved its stated goal of 2% inflation.

The Bureau of Labor Statistics is out this morning with the consumer price index. It registered a 0.4% increase in May, and a year-over-year increase of 2.1%. Even if you throw out food and energy (because they’re “volatile,” don’t you know), it’s still 1.9%. 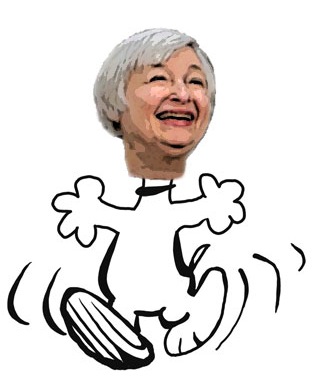 On second thought, we’d rather not imagine that at all.

Any decisions they make won’t be announced till tomorrow afternoon.

Outside the Marriner Eccles Building, in the real world where you and I live, inflation as calculated by John Williams at Shadow Government Statistics is running 9.9% — the highest annual increase since April 2012.

Own a bond fund? You might soon be subject to an “exit fee” if you want to sell.

That too is under discussion this week at the Federal Reserve. “Officials are concerned that bond funds are becoming ‘shadow banks,’ because investors can withdraw their money on demand, even though the assets held by the funds can be hard to sell in a crisis,” according to this morning’s Financial Times.

The “exit fee” is another instance of the Fed trying to fix a problem of its own creation, says former White House budget chief David Stockman.

“Owing to the Fed’s brutal financial repression since December 2008 (i.e., zero yield on short-term funds), there has been massive scramble for yield that has driven trillions into corporate and high-yield bond funds,” Stockman explains at his invaluable Contra Corner site.

“Liquid funds which would have normally been parked in bank deposits or money market funds have been artificially displaced. That is, they have been chased by the dictates of the monetary politburo into far more illiquid and risky investment vehicles owing to zero yields in their preferred financial venues.”

And there’s no way out: “Even the announcement of a rule-making,” Mr. Stockman writes, “would potentially trigger the very kind of sell-off that it would be designed to prevent. And if corporate bond prices took a tumble, it would not take long for equity markets to recognize that the massive flow of new debt capital which has been used to fund record stock buybacks could suddenly dry up.”

“It was a scene of economic depression,” writes the peripatetic Chris Mayer — checking in from a suburb of the Greek capital of Athens.

In between visiting the Acropolis and a stop at a winery, Chris and a small group of readers checked out a city called Markopoulo. “We visited a typical house: two levels, about 750 square feet per level, plus a rooftop patio and a basement. The house, we were told, would have gone for $825,000 before the bust. Today, it’s on sale for $445,000. We thought it might be interesting for $75,000.

“There is a ton of supply here. Just a mind-boggling amount of property. It’s going to take a long time for this suburban market to come back — if it ever does.”

“But the Greek stock market is a different animal,” Chris says.

“This ratio is not everything, but like a crowded Athenian taverna, it can be an indication of good things on sale within.” More to come from Chris soon…

It’s awfully hard to save the whales when you blow $5.2 million on currency trades.

Greenpeace disclosed the loss yesterday; an unnamed employee in its financial unit figured the euro would not strengthen against other currencies last year. He or she figured wrong. He or she has been fired — not for losing money, but for failing to follow procedure.

Fraud is not suspected: “Every indication is, this was done with the best of intentions but not the best of judgment,” spokesman Mike Townsley tells The Associated Press.

Then again, saving the whales is probably still doable; the loss works out to 1.3% of Greenpeace’s annual donations.

We knew it would come to this: Someone’s run the numbers on how much GDP would grow in the United States if drugs and prostitution were included in the calculation.

Last month, we noted statisticians in Italy and the United Kingdom are adding hookers and blow to the figures, the better to comply with European Union standards.

Now come the folks at The Fiscal Times — the policy website funded by the Peterson Foundation — applying the British statistical model to the U.S.

“If prostitution and illegal drug sales actually do make up 0.7% of U.S. GDP,” they write, “then according to the Commerce Department, that would put those two illegal industries on par with the motion picture and recording industries in terms of total contribution to the economy. 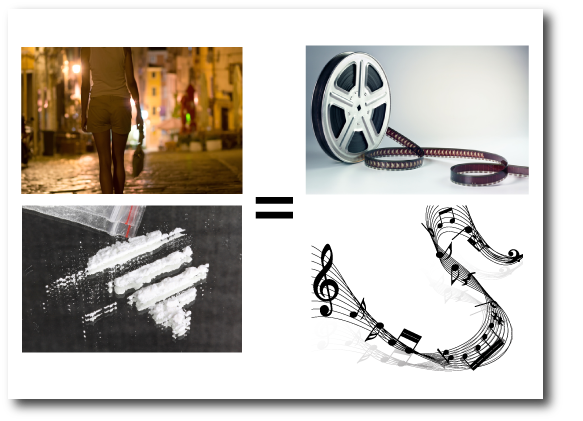 “It would also mean that on an individual basis, they add more than coal mining, air transportation and other significant sectors to U.S economic output.”

How is this relevant to your life? It’s not.

As the aforementioned Chris Mayer has long observed in these pages, GDP is a meaningless statistical abstraction, “just a number that economists can play with, a relic from a misguided age.” We’re in debt to The Fiscal Times for reminding us of that…

“Don’t underestimate the significance of the Iraq civil war,” a reader writes…

“…as it represents a battle between moderate Islam and Sharia (Satanic Verses) Islam. If the moderates lose Baghdad, then millions more young Muslims will flock to the dark side, worldwide.

“The Western powers cannot stand by and let this happen — think Chamberlain and Hitler — unless they want to face the ultimate Crusaders versus Saladin in the near future.”

We see the White House is thinking about sending special forces back into Iraq. (Ah, but technically they’re not “combat troops,” so the president won’t violate his pledge last week of “no boots on the ground”…)

We’re not underestimating the significance of the Iraq civil war at all. Likewise, we never underestimate Washington’s capacity to make a bad situation worse…

P.S. Imagine a monthly income stream that never runs dry, no matter how long you live.

Many dream it, few achieve it. It’s not as if Wall Street is falling all over itself to clue you in to its easiest and most powerful income-generating system.

But now a growing number of people just like you are starting to discover these large, safe and repeatable income streams that…

Discover why one insider called this simple system “the holy grail of investing.” And why a leading magazine calls this opportunity “the one chance, besides organized crime and lotto, for an everyday person to get rich.”

It could be the easiest money you’ll ever earn. Click here to get started today.