Wealth In the Eye of the Beholder

“The more you make, the more you think it takes to be rich,” observes UCLA political science professor Lynn Vavreck.

That’s borne out in a survey from the research firm YouGov. It sought out 1,000 Americans and asked them what kind of annual income would qualify someone as “rich.”

The answers depended on the survey respondent’s income… 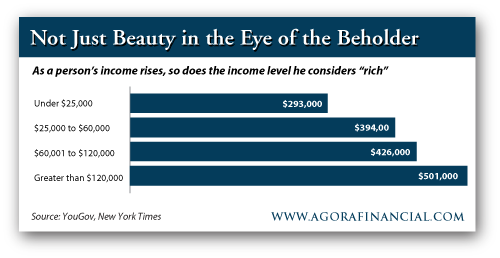 The demographic breakdown was intriguing, writes professor Vavreck: “Among city-dwellers, 28% thought there was at least a small chance they might one day become rich, while 18% of people who lived in the suburbs felt this way and only 5% of those who live in rural areas. But roughly three times as many rural Americans (about 7%) and twice as many suburbanites (4%) thought they were already rich relative to those in cities.”

Crude is hanging in there this morning, a barrel of West Texas Intermediate fetching $106.26.

The situation in Iraq? Still bad. And ambiguous:

Whether Exxon is scrambling for the exits or not, it only reinforces our Byron King’s long-standing guidance — steer clear of oil stocks with heavy Middle East exposure. Especially when so many promising players are making new fortunes in the United States.

[Ed. note: We got an impressive response to our call yesterday for 100 “wildcatters” looking to double their money playing America’s shale boom in only 36 days.

So we’re aiming to line up 100 more today. No matter how rich you think you are now, or how rich you ultimately aspire to be, city or country, you can bag a double in 36 days — because subscribers to our Real Wealth Trader service already did it once this year. Follow this link and you won’t miss out.]

Elsewhere in the energy patch, Canada is moving to send some of its oil sands energy to China.

Yesterday, the government approved plans by the big pipeline firm Enbridge to build the Northern Gateway pipeline — stretching from the Alberta oil sands to British Columbia’s Pacific Coast. Prime Minister Stephen Harper’s Conservative government has been pushing for the project while President Obama hems and haws about the Keystone XL pipeline extension that would bring Alberta oil down to the Gulf Coast. 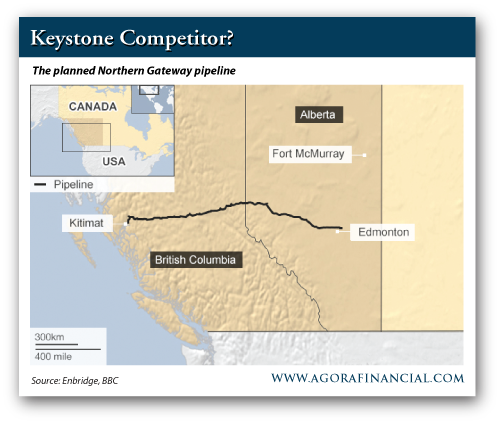 “Now there’s some pressure on Obama to approve Keystone,” says Matt Insley of our energy desk. In April, the feds kicked the can indefinitely — or at least until after the November midterm elections. We’ll see whether the prospect of Canadian crude bound for the Middle Kingdom might change that…

Stocks are in suspended animation this morning, awaiting the Federal Reserve’s latest policy pronouncement this afternoon — due around the time this episode of The 5 hits your inbox.

For the moment, every major index is within a 10th of a percent of yesterday’s close, the Dow a hair below 16,800. Gold is likewise little changed at $1,271.

That’s the takeaway from a recent New York Times piece by John Coates — an ex-Goldman Sachs guy who’s now a research fellow at Cambridge, diving deep into “behavioral finance.” Despite his suspicious pedigree, he’s given us a thing or two to think about as we await the Fed’s latest statement.

The Fed these days is all about “communications policy” and “forward guidance” — telegraphing its intentions as explicitly as possible (even as its intentions change from month to month). It was Alan Greenspan who ushered in this era in 1994. Before then, the Fed would change the fed funds rate at unpredictable moments. Then it started doing so only at its scheduled meetings, unless there was an “emergency” (usually of the Fed’s own making, heh).

A funny thing has happened since, writes Coates: “Cycles of bubble and crash have always existed, but in the 20 years after 1994, they became more severe and longer lasting than in the previous 20 years.” You can see it for yourself in a chart prepared by Mr. Coates that we reproduce here verbatim… 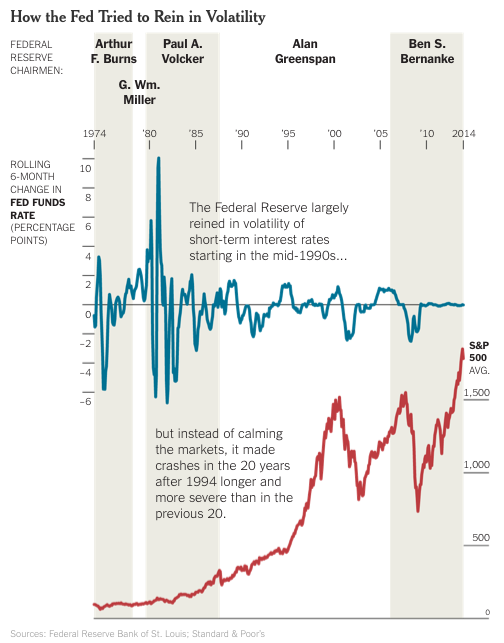 “I suspect the trends in fed funds and stocks were related,” says Coates. “As uncertainty in fed funds declined, one of the most powerful brakes on excessive risk taking in stocks was released.”

Coates’ suggested remedy is to go back to the days of Paul Volcker — when the Fed acted in total secrecy, jacking the fed funds rate up and down and all around at unpredictable intervals.

Right. Because God forbid interest rates — the most important prices of all — be left subject to market forces…

“The more CEOs are paid, the worse the firm does over the next three years, as far as stock performance and even accounting performance,” says the University of Utah’s Michael Cooper.

Last month, our Chris Mayer spotted research that says contrary to what you might expect, there’s little if any correlation between CEO pay and shareholder return.

Now professor Cooper and colleagues have stepped forward with an exhaustive study of the 1,500 companies with the biggest market caps, stretching back 20 years. Their conclusion? Higher pay is actually correlated with below-par stock performance.

What’s more, the worst effects were found in the 150 firms with the highest-paid CEOs. “As a group, the companies run by the CEOs who were paid at the top 10% of the scale had the worst performance,” writes Susan Adams at Forbes. “How much worse? The firms returned 10% less to their shareholders than did their industry peers.”

And the CEOs whose pay put them in the top 5%? Their share performance was 15% below industry peers!

And the longer a CEO sticks around, the worse the performance — as they load up the board with their cronies who go along with their rotten decisions.

“What can be done about all those negative numbers?” Ms. Adams at Forbes wrings her hands.

Professor Cooper tells her some finance experts point to “claw-back” provisions, docking a CEO’s pay if the firm performs poorly relative to the competition. “That proposal hasn’t gone over real well,” Cooper says. “There is another school of thought, that CEOs are just too highly paid, period.”

Oy… At the risk of beating a dead horse if you’ve been reading us for a while, Chris Mayer says it’s all about the difference between “hired gun” CEOs and CEOs who actually own a piece of the company. If the CEO has the proverbial skin in the game, his interests are aligned with your interests as a shareholder.

Chris has long pointed to the example of the late Ken Peak, CEO of Contango Oil & Gas. “Peak invested his life savings of $400,000 and raised $5 million in seed capital,” Chris recalls of Contango’s launch in 1999. For the first 10 years, Peak paid himself a modest salary of $150,000. He used his bonuses to buy stock, and he owned 19% of the company.

[For every rule there’s an exception: Sometimes there’s a juicy opportunity hidden within a company that has one of those hired-gun CEOs. Chris identified one such opportunity recently, affording you the chance to multiply your returns fivefold… even as you reduce the amount of money you put at risk by up to 80%. Chris reveals all here.]

“No doubt he or she would be just closing now on a house next to Jon Corzine’s in Bermuda.”

“One day, in the not-too-distant future, most will ask, ‘What happened? I didn’t see this coming,'” a reader writes after our take on the proposed “exit fee” for bond funds.

“The reality is that many clues are being sent out every day. We have new laws such as FATCA here in the USA, and then there is the announcement by the European Central Bank that they may turn to negative interest rates. And then we have this latest warning that you may be assessed a fee for withdrawing your money from a private bond fund — which will probably include money market funds also.

“When you combine all this with current Federal Reserve policy, QE 1, 2, 3, etc., and zero interest rates, the writing on the wall seems to be coming into focus. I would venture a guess that more government controls are coming our way. By the way, who would be the recipient of that exit fee?”

The 5: Why, the fund managers, natch. BlackRock, the world’s biggest asset manager, is already agitating for this change…

“Hmmm, I seem to remember some other U.S. military advisers in the 1950s in a place called Vietnam,” a reader writes about Iraq’s newest travails. “Now, that was a really wise move.

“The U.S. plays tick-tack-toe,” he goes on. “The Chinese, and to a lesser extent the Muslims, play Go. ‘Nuff said about U.S. foreign policy and the eventual outcomes.”

“I appreciate the reader’s logic,” writes a Reserve member in response to the fellow yesterday who described a battle between moderate and hard-core Islam, “but most people don’t recognize that ‘moderate’ stands for nothing, and as a result a ‘moderate’ has never successfully conquered or resisted conquest in the history of the world.

“It takes people who are driven by whatever goals and beliefs that they hold dear to fight for freedom or resist the onslaught. Never take a moderate to a gunfight… take the craziest lunatic you can find who believes in your cause, because gunfights are not rational activities. Anyone with a ‘moderate’ label, whether they be Muslim, Christian, Jewish or any other faith, will lose the backbone needed for a life-or-death conflict. Moderates are doomed to lose.

“It’s just like asking the ‘moderate’ Muslims in our country to moderate the influence of the radical Muslims. Ain’t gonna happen. A radical will fight and win, e.g., the American Revolution. Moderates in 1776 would have just caved in to King George.”

The 5: Now you’ve done it. We await an onslaught of outraged mail from the nuance-challenged who think you’re equating jihadis with the Founders…

“How come nobody gets this,” another reader writes. “We installed a Shia leader in Iraq. We left. The Sunnis are revolting against their 1,000-year-old enemy. When they start to win in earnest, Iran will come to the aid of their Shia brothers.

“Unable to totally destroy the Sunnis for fear of the Israelis and their allies (the U.S.) and the rest of the Sunni nations (Saudi Arabia, etc.) and the Turks and Kurds, they will stop. A three-state solution will evolve: Sunni Syria/Iraq, Kurdistan and Shia Iraq. This is how it was before, during and now after the Ottomans. Why don’t our politicians ever read their history books?”

The 5: They do read their history books. Unfortunately, they’re all by Bernard Lewis, who steels politicians with the delusion they can direct events in that part of the world to their own liking…

P.S. This just in: The Iraqi government has formally asked for American airstrikes against ISIS. Whether any ISIS targets can be found is another matter entirely…

As the reader said, what’s unfolding in Iraq now is the continuation of an ancient conflict — 1,354 years old, to be precise. And it has the potential to double the oil price from here. For the essential background, and the investment guidance that follows, we direct your attention here.