The “Skills” That Matter in the 21st Century

“When was the last time you talked to a telephone operator?” quizzes Steven Rattner.

Mr. Rattner — his New York Times bio describes him as “a contributing opinion writer and an investment adviser” — has penned an, ummm, interesting opinion piece for the Gray Lady.

Actually, what he had to say was mighty prosaic. It was about the process of what the economist Joseph Schumpeter called “creative destruction” — old industries and jobs giving way to new ones. “Fear Not the Coming of the Robots” is the headline.

“Throughout history,” Rattner writes, “aspiring Cassandras have regularly proclaimed that new waves of technological innovation would render huge numbers of workers idle, leading to all manner of economic, social and political disruption.”

True enough. Equally true: It’s never worked out that way; there’s always been something new for idle hands to do.

It’s what Rattner left unsaid that caught our attention. It lies at the heart of the “Tale of Two Americas” that each of our editors and writers has addressed one way or another for 2½ years.

Our fearless leader Addison Wiggin first articulated the theme in these pages in January 2012 — “the contrast between the overwhelming rot penetrating governments and the financial system on the one hand… and the staggering entrepreneurial potential that can overcome the rot on the other.”

We’ve been trying to make sense of this conundrum ever since.

Rattner presents himself as the advocate of innovation: “We should be embracing technology, not fearing it.”

There’s a fascinating chart that accompanies his article, spotlighting the jobs that have largely gone away in the 21st century — like telephone operators — and the jobs whose numbers have grown. We reproduce it verbatim; click on it to enlarge. 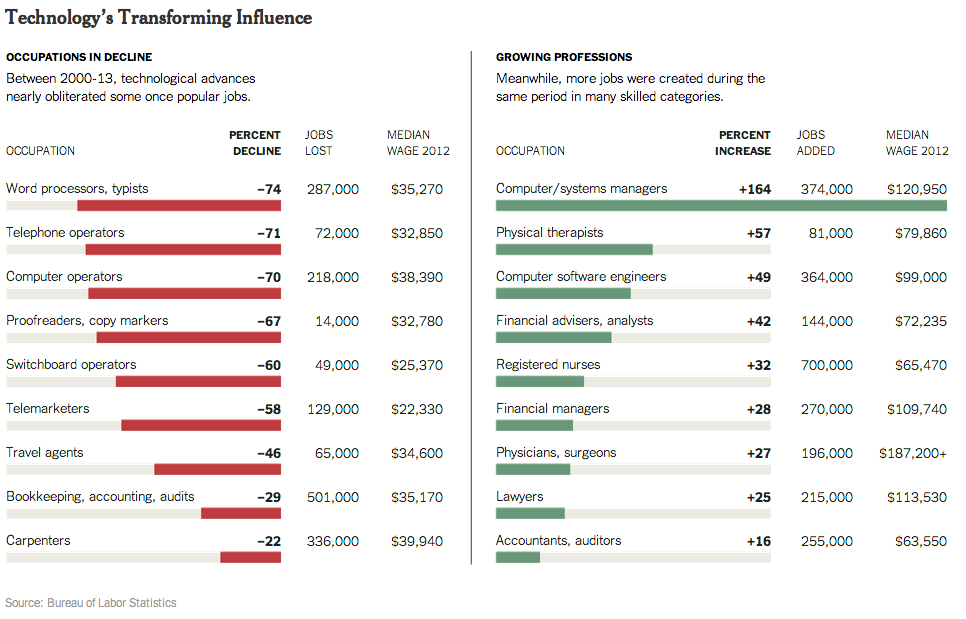 Notice anything funky about the right side of the chart, the nine “skilled” categories where there’s been growth since 2000?

Aside from two directly related to the technology-media-telecom sector, none of them is involved in the creation of new wealth…

On the last of those items: Go to any Rust Belt city where there’s even a scintilla of economic vibrancy and one of the first things you’ll hear is, “Oh, yeah, health care is big here.”

He is a Wall Street guy and a Big Government guy. He was an investment banker with Lehman Bros. and Morgan Stanley. He now runs the investment firm that manages Michael Bloomberg’s assets. And he was the “car czar” during the early days of the Obama presidency.

Yup. His solution for reinventing the U.S. auto industry was not to let GM and Chrysler go bankrupt, allowing its patents and factories to pass into the hands of people who could manage them better. Nope, better to be a Big Man running a “Cabinet-level task force” and piling billions, hell trillions, more onto the national debt.

So when he gives lip service in his article to the fact jobs are scarce and incomes stagnant, he does not chalk up these phenomena to the growth of Wall Street and Washington these last 30 years. No, it’s all about “globalization.”

His suggested remedy is “educating and training Americans to perform the more skilled jobs that cannot yet be performed by workers in developing countries,” like the ones on the right side of the chart.

Presumably, that would require another Bold Government Program (or better yet, a Bold Public-Private Partnership) extracting even more tax money from the productive classes and piling trillions more onto the national debt.

Were it not for the likes of Mr. Rattner, how much more could America’s technology, biotech and energy industries accomplish? What new industries might spring forth that we can’t even conceive of?

We don’t know the answer. Instead, we ponder the damage done by everyone from Steven Rattner to John Nestor — a bureaucrat so legendary his name inspired a verb. Click below for a three-minute video telling that mind-blowing story… 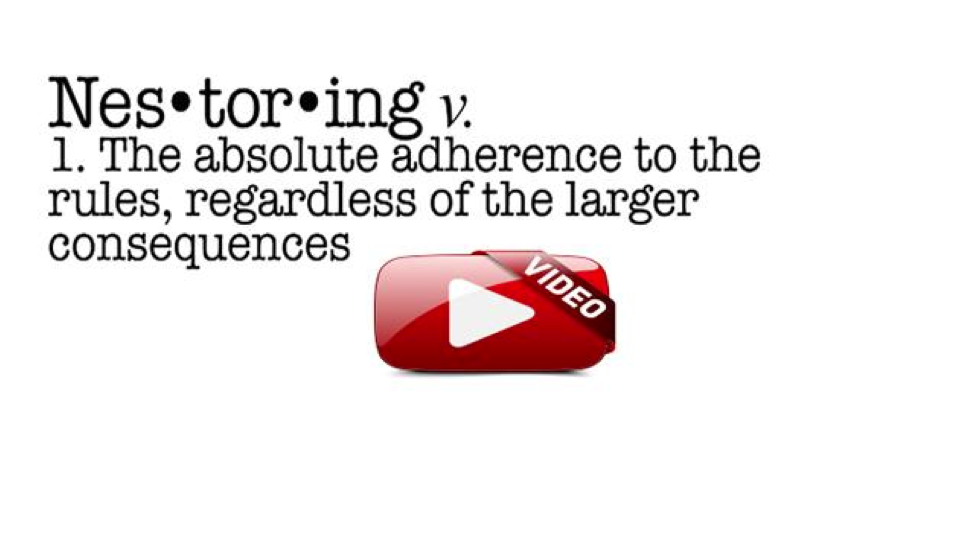 Stocks are pushing higher this morning, traders welcoming LeBron James’ decision to become a free agent. At last check, the S&P 500 was back in record territory, two points shy of 1,970.

Seriously, there’s no “organic” factor driving the numbers today. The two big economic numbers are both housing related, and mixed.

Prices as measured by the Case-Shiller index rose 10.8% from April 2013 to April of this year — the smallest 12-month gain in more than a year. On the other hand, sales of new homes turned in a huge upside surprise, surging 18.6% last month to a high last seen in 2008.

“I like housing here and as a potential buy-the-dips play — even if the broad market dips this summer,” chimes in Greg Guenthner in today’s Rude Awakening.

“Remember, everyone has been worried that rising interest rates will squash the housing market. So when new home sales slumped 7% in late 2013, analysts were quick to blame rates as the culprit. Everyone thought rates had to move higher. But here we are. Rates drifted lower again and the housing market looks strong.”

Greg’s looking for a stealth rally among the homebuilders. “It’s important to note that the iShares Dow Jones US Home Construction ETF (NYSE:ITB) and the retail-heavy SPDR Homebuilders Index ETF (NYSE:XHB) underperformed the S&P in 2013, while home prices actually increased 10.9%. That marked their biggest annual increase since the bursting of the housing bubble — and homebuilders spent the year consolidating instead of ripping higher.

“Now, we have a situation where the major holdings in both ITB and XHB are looking downright cheap compared with the S&P. Earnings for individual builders also look strong.”

If you’re of a trading mindset, Greg has one in particular in mind for his paying readers; you can join their ranks here.

Precious metals are drifting higher. Gold has tacked on a couple of bucks at last check, to $1,318. Silver has recovered the $21 level for the first time in more than three months.

The platinum group metals (PGMs) are rallying despite word from South Africa of an end to a five-month miners’ strike. Platinum has bounced to $1,467 while palladium — the year’s star performer in the precious metals complex — has firmed to $825.

“The platinum industry is expected to see the largest deficit ever this year as a result of the strike, and face continuing restructuring and other issues in the coming years,” says CPM Group in its latest Platinum Group Metals Yearbook, just out. So prices could reflect tightening supplies for a while longer…

[Ed. note: The resurgence in precious metals of late underscores the “Resource Rebound” theme of the Sprott Vancouver Natural Resource Symposium next month. Whether it’s mining or energy that captures your interest, you’ll have the chance to hear from experts like Rick Rule, Frank Holmes, Doug Casey and our own Byron King.

The dates are July 22-25. The place is the Hotel Fairmont Vancouver. We know it well from the events we’ve held there ourselves over the years — Vancouver in the third week of July is incomparable. Seats are still available, but they’re going fast. For registration details, including a full speaker lineup, simply follow this link.]

So much for Germany’s great gold repatriation.

In January of last year, Germany’s central bank, the Bundesbank, announced it wanted to bring home the 45% of its substantial gold reserves held at the New York Fed — seeing as the Cold War was long over and the gold no longer needed to be held abroad for safekeeping.

As you may recall, the Fed said it would be happy to accommodate and Germany could have all its gold back… by 2020. Only a token quantity was shipped back last year.

Now, according to BusinessWeek, Germany’s government has decided it’s fine leaving the gold where it is. Seems the only reason it asked in the first place was that a party in Chancellor Angela Merkel’s governing coalition was agitating for it… and that party has now dropped out of the coalition.

“The Americans are taking good care of our gold,” says a parliamentarian loyal to Merkel. “Objectively, there’s absolutely no reason for mistrust.”

Jim Rickards anticipated this development in his recent book The Death of Money. “It is more convenient for the Deutsche Bundesbank to have its gold in New York,” he wrote, “where it can be utilized in gold swaps and gold leases, as part of central bank efforts to manipulate gold markets.”

The organizers behind Germany’s “Repatriate Our Gold” campaign say they’re not giving up, but their efforts are for the moment “on hold.”

And now for some spooky gold goodness — a 14.7 pound gold nugget discovered under a full moon on Friday the 13th. 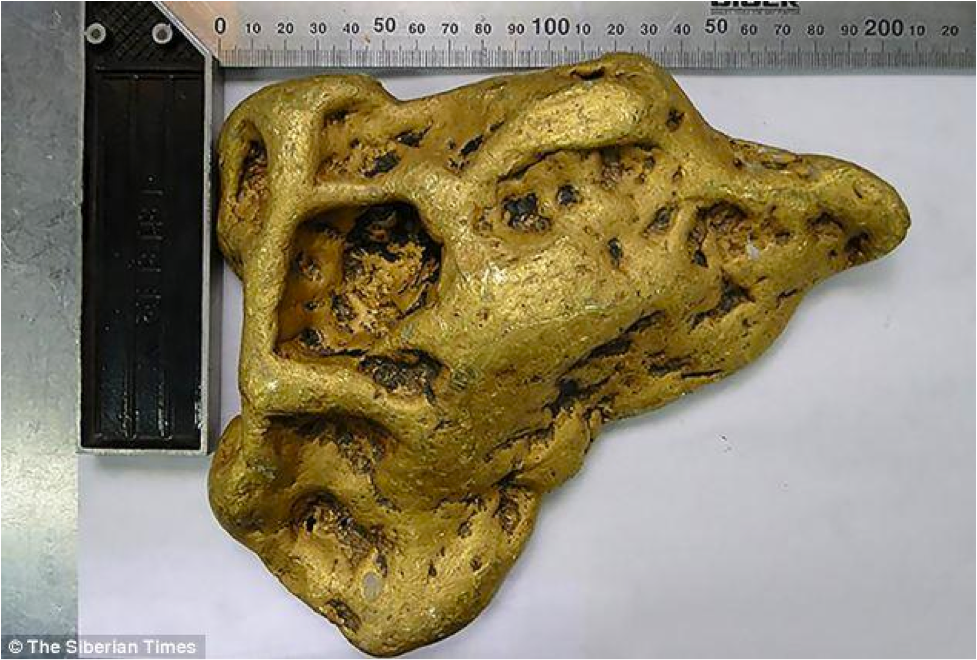 It happened in Siberia, at the Ukhagan Mine in the Irkutsk region. “Initially, the precious lump was cast aside by a sifting machine,” reports the Daily Mail, “but was later spotted by an eagle-eyed worker.”

Hopes are there’s more where that came from. But before any further exploration, workers are under orders to sift through what’s already been dug up more carefully.

If you’re hoping for similar luck, you’ll have to be patient. The next Friday the 13th under a full moon won’t happen till August 2049.

“Just as a side note to yesterday’s 5, as a dual U.S.-Canadian citizen who resided in Canada when the goods and services tax (GST) was introduced,” a reader writes…

“When the GST began, they dropped the MST (manufacturers’ sales tax); this allowed Canada to sell product into the U.S. minus that tax that originally was levied on the manufacturer.

“Thus, Canada got to ship all kinds of goodies to the U.S. minus that tax, which, if I recall, was somewhere around 12% or so. Canadians still paid approximately the same for a widget, but it really helped the exporters.”

“I have to correct one thing, sadly due to personal experience,” writes a reader with an emendation to another reader’s comment about synergy between Obamacare and the TSA.

“I agree about the freebies administered by the TSA except that last part about a colonoscopy. It isn’t as extensive as a colonoscopy, which includes pictures and possible polyp biopsies.

“It is however, a prostate exam, plain and simple. In case anyone was wondering…”

The 5: And a check for testicular cancer in which you don’t get any results…

P.S. While we still have Rattner and so-called “crony capitalist” culture on the brain…

The ex-banker on our team has come across a unique opportunity — made possible only by the 2008 bailouts. It affords you the chance to make five times your money over the next four years.

“That means for every $18 you invest, it could give you back $94,” he explains. “Show me a mutual fund that’s doing that for you now.”

Best of all, you can seize on this opportunity in a plain-vanilla brokerage account. Curious? Click here to learn more.