“The gold price is near the end of its long consolidation period,” says one of the most authoritative annual reports on the Midas metal.

In Gold We Trust is issued each year by Ronald Stoeferle at Incrementum AG, an asset manager based in Liechtenstein.

“Longer term, we expect that a parabolic trend acceleration phase still lies ahead. In the course of this event, our long-term target of $2,300 should be reached at the end of the cycle.”

“Even though consensus now assumes that gold’s bull market is over, we believe that the fundamental case remains intact more than ever.”

Stoeferle reaches that conclusion in part on the experience of 1974-76… when gold tumbled 50%, from $200 to $100. “The period is similar to the current one,” he writes — falling inflation, rising real interest rates and gold pessimism no matter where you turn… 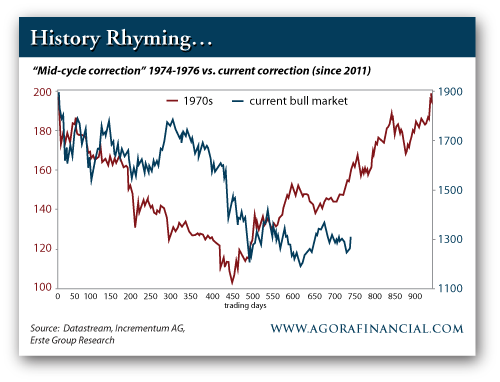 Stoeferle points to an August 1976 New York Times story that could just as easily be published today: “The [economic] fear that dominated two years ago has largely vanished, replaced by a recovery that has turned the gold speculators’ dreams into a nightmare.” 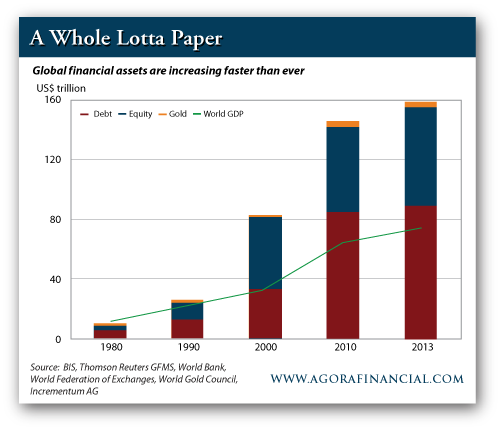 Much of the recent growth is in the bond market. “Between 2000-2013,” Stoeferle writes, “the value of outstanding debt securities has almost tripled (from $33 trillion to $100 trillion). Over the same period, the total capitalization of stock markets has increased by a mere 35% (from $49 trillion to $66 trillion).

“The share of gold can also be seen. While it has grown considerably since 2000, it nevertheless remains at an extremely low level”… and he believes it is set to continue growing.

“Based on our historical observations and the math of the markets, gold is not overbought, in our opinion, but is simply reverting to its mean” — moving back to historical averages. 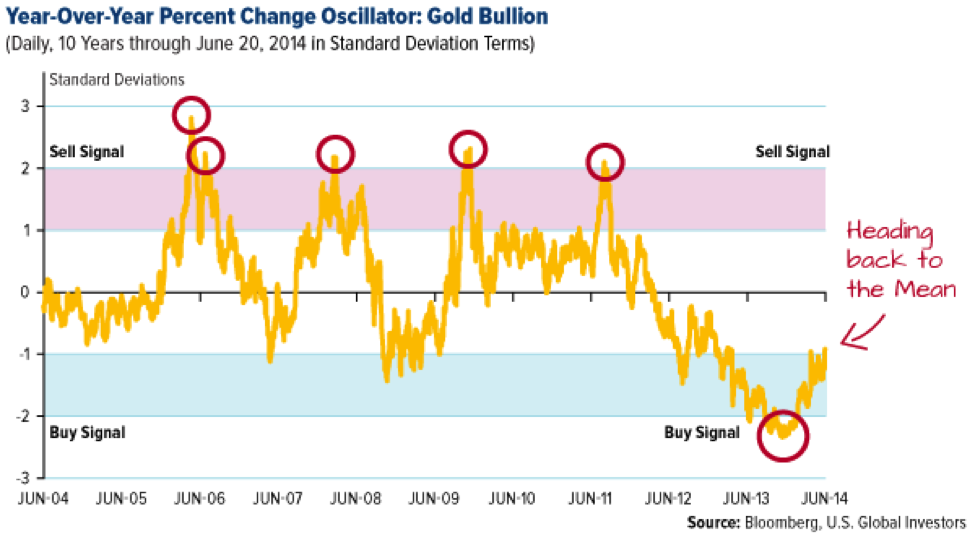 “Another reason that gold is moving is it’s beginning its seasonal cycle, driven by cultural gold buying. The demand for gold reflected over the next several months and characterized by the purchase of the metal for cultural celebrations and religious holidays I refer to as the Love Trade.”

Next month brings the celebration of Ramadan in the Muslim world. “The Indian Festival of Lights comes after, followed by wedding season and, of course, Christmas.”

[Ed. note: Next month also brings the Sprott Vancouver Natural Resource Symposium. It carries on the tradition of our own conferences in Vancouver, but with a laser focus on metals, mining and energy.

Mr. Holmes will be among the distinguished speakers, along with our own Byron King and resource investing legend (really, just a legend) Doug Casey. The impresario for this event is Sprott USA’s own Rick Rule, who we’re sure will lead his “dawn patrol” sessions for the hardiest souls seeking his insights into tiny resource players; he knows them all like the back of his hand.

Seats are filling fast, seeing as the event is less than one month away — July 22-25. There’s no better way to prepare your portfolio for a resource rebound a la the late 1970s. You can go here for a speaker lineup and full registration details.]

What the major stock indexes gained yesterday they’re giving away today… and then some.

At last check, the Dow had sunk below 16,800. The S&P clings to 1,950 barely. Volume, thin this time of year anyway, is shrinking to a trickle as midday approaches and traders turn their attention to the World Cup. Maybe a few of them even printed up this note signed by U.S. coach Jurgen Klinsmann and handed it to their bosses… heh. 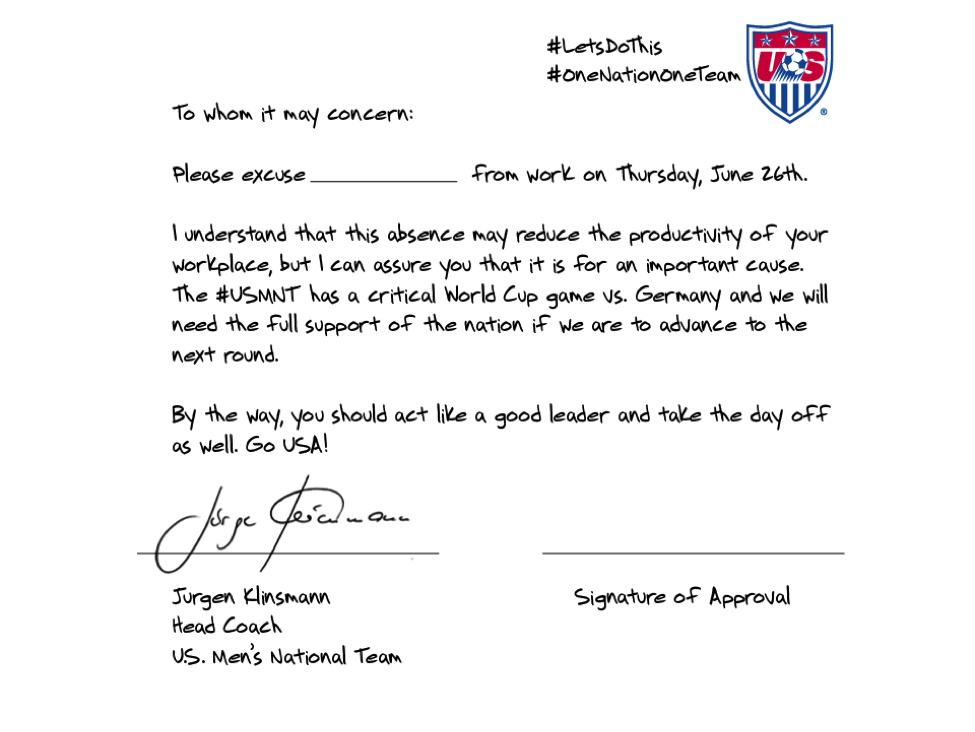 Meanwhile, hot money leaving stocks is going into bonds; the yield on a 10-year Treasury note has backed off to 2.52%.

Crude has slipped below the $106 level that’s been a floor the last two weeks. At last check, a barrel of West Texas Intermediate fetches $105.34.

Americans are salting something away for a rainy day, judging by the Commerce Department’s “income and spend” report for May.

Incomes grew 0.4%… while purchases grew at only half that rate. It’s the second month in a row Americans haven’t been spending out of an empty pocket — how ’bout that?

The “savings rate” — which includes both actual savings and debt paydown — rose to an eight-month high.

Americans could use all the savings they can get; a study out this week from Bankrate shows one in four Americans has no emergency savings — a dire situation that’s been in place for four years.

The percentage of people who have at least three months’ expenses saved has sunk from 45% last year to 40% this year.

The age cohort most likely to have no emergency savings? Those between 30 and 49. The Millennials are actually more likely to have something set aside.

One more note about the income-and-spend report — the “core PCE” figure, which is the Federal Reserve’s preferred measure of inflation.

The annual rate of increase continues to creep up; it’s now 1.5%. But that’s still well below the Fed’s “target” of 2%. (As always, any resemblance to your own cost of living is purely coincidental.)

Stupidity is repetitive… or so we can only conclude after a strike of sorts by cabdrivers yesterday in Washington, D.C.

Like cabbies elsewhere around the globe, they’re upset at the competition from ride-sharing services like Uber and Lyft. So they decided to generate public sympathy — ahem — by tying up lunch-hour traffic on Pennsylvania Avenue, leaning on their horns and driving 15 miles an hour with their emergency flashers on. 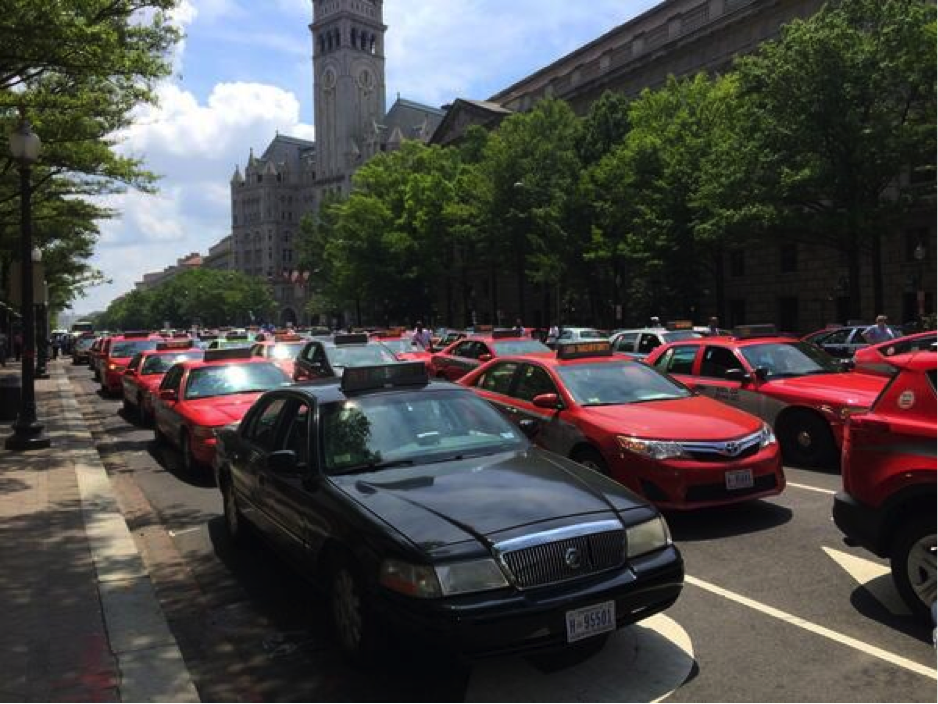 You’d think these guys would have learned from the anti-Uber protests in Europe two weeks ago… which backfired spectacularly and Uber signups in London exploded 850%.

But you would be wrong, tweets this reporter from the Washington Free Beacon…

“Well, I’m never taking a cab again,” said one man who passed the protest within earshot of a reporter from DCist. Love it…

Here’s your government in action… or, in this case, movement.

According to Government Executive, managers at a federal office in Denver wrote an email earlier this year urging staff “to stop inappropriate bathroom behavior, including defecating in the hallway.”

The memo cited “several incidents” including clogging the toilets with paper towels and “an individual placing feces in the hallway” outside the restroom.

Agency managers brought in “national expert” on workplace violence, who said the individual’s actions constitute a “health and safety risk.” Gee, ya think?

The agency where this took place, you wonder? The EPA.

“Perhaps you’ll recall Saddam ‘gassed’ his own people as well as Iranians. Gas is a weapon of so-called ‘mass destruction.'”

The 5: You really want to go there?

Yes, Saddam carried out chemical weapons attacks during the Iran-Iraq War of the 1980s — with substantial American help, according to CIA files declassified last year. “U.S. intelligence officials conveyed the location of the Iranian troops to Iraq,” reported Foreign Policy, “fully aware that Hussein’s military would attack with chemical weapons, including sarin, a lethal nerve agent.”

We’re not sure what that has to do with the question of whether Saddam still had chemical weapons or other WMDs in 2003. But thank you for playing…

“Pardon me — ‘berserkers’ in Iraq?” writes another irritated reader, taking issue with our offhand characterization of ISIS.

“Since when is one’s sincere attempt to comply with the dictates of his religion a ‘berserker’?”

The 5: Oh, maybe when they behead one of their own by mistake, as they did in Syria last year.

“I almost always enjoy The 5 Min. Forecast,” a reader writes, “and have read it now for many years.”

[As always, we’ve been at this long enough to anticipate the inevitable “but…”]

“It is well written, pithy and informative and actually makes me think about things in a different way.”

“I subscribe to several of your newsletters and find them of great value both educationally and financially, so thanks for that.”

[Really now, you don’t have to flatter us that much before showing the knife…]

“I have tried to listen to the JFK link several times, but the video always fails to load. Is there any other way of getting it? Maybe through a transcript?”

The 5: That’s all? Gosh, and we were expecting a broadside.

The reader refers to our new expose on “JFK’s Secret Currency” — complete with disturbing new details about who might have been behind the death of the 35th president.

“Two questions. One, whatever happened to the Iranian ‘navy’ patrolling off the U.S. coast??

“Second, it’s my understanding that the labor statistics report employed folks as those that receive wage deductions… 60%? c’mon.

“Now, police, firefighters, teachers, g’ment people all are counted as employed (not to diminish their service; we need them) — they do, however, basically live off the taxpayers’ dime.

“What percentage of people who actually make stuff (ouch) support the economy? What is the ‘tipping point’? Can 20% of the population sustain the other 80%? 10%??

The 5: No idea on the first question. We assume if the ship or ships did anything untoward, there’s a hellacious amount of U.S. firepower in the Persian Gulf that would be immediately brought to bear.

On the second, we’re not 100% sure what you’re getting at, but… according to the Census Bureau, 86.4 million Americans were working full time in the private sector during 2012.

Nearly as many people — 82.4 million — live in households where one or more people are on Medicaid.

P.S. New York’s attorney general is going after the British banking giant Barclays for some of its high-speed trading practices. As we write, Barlcays shares are down 5% today.

There’s not much you or I can do about high-frequency trading. But you can seize on one of Wall Street’s best-known trading “secrets” to pad your portfolio with thousands of dollars, month after month.

To learn more about this low-risk, high-paying strategy, give this a look.