Imagine a 20th century in which there’d been no Nazi Germany, no Soviet Russia.

“The First World War is the turning point of the 20th century,” historian Ralph Raico begins his anthology Great Wars and Great Leaders.

And so it is: The chaos the war wrought in Russia made it possible for Lenin’s tiny and unpopular crew to seize power. Hitler’s crew started out tiny and unpopular too, but resentment in Germany against the postwar settlement turned the National Socialists into a movement.

One hundred years ago tomorrow, the Serbian gunman Gavrilo Princip shot and killed Archduke Franz Ferdinand of Austria. It’s the event grade schoolers are told “started” World War I. The reality is more nuanced: Princip’s act came after years of mendacity and miscalculation by European politicos and potentates.

Without World War I, it’s also unlikely an entity known as “Iraq” would have come into being.

The mendacity and miscalculation carried on during and after the war. The British and French carved up the carcass of the Ottoman Empire between themselves.

The divide-and-rule borders they drew yielded, among other things, a new British colony called Iraq — lumping Sunni and Shia, Arab and Kurd, together in one not-so-happy family. Only brute force could keep them together, and for nearly a century, a long line of rulers, from the Brits to Saddam Hussein, did just that.

Now it’s all flying apart, Sunni and Shia at each other’s throats over Iraq’s oil bounty.

Oil is almost the sole source of the Iraqi government’s revenue… and that revenue doubled from 2010-13 as production steadily grew to 3 million barrels a day.

“But none of this oil wealth trickled down to the grassroots, especially in Sunni areas of the country, where signs of reconstruction, economic development, restored services or jobs were hard to discern,” says sociologist Michael Schwartz, author of the presciently titled 2008 book War Without End: The Iraq War in Context.

“Instead, the vast new revenues disappeared into the recesses of a government ranked by Transparency International as the seventh most corrupt on the planet.”

The Sunnis began demanding redress. The Shia-dominated government of Prime Minister Nouri al-Maliki turned a deaf ear — when it wasn’t mowing down peaceful Sunni protesters by the dozens, as it did in April 2013.

So oil is the driver behind the current conflict in Iraq.

It’s an imperfect analogy, but here goes: Hitler couldn’t rise to power without the support of Germans who held a grudge against the WWI victors who imposed an unjust peace that wrecked their economy. Today, the berserkers of ISIS — a bunch considered “too radical for al-Qaida” — wouldn’t be seizing territory without the support of Sunnis holding a grudge against the Shia clinging to Iraqi oil wealth.

Now the fighting is spreading and Iraq’s 3 million barrels a day of production is at risk. And as our resident oil field geologist Byron King reminded us last week, Iraq’s production equals “the entire U.S. ‘extra’ output from fracking over the past five years. So in one fell swoop, five years of U.S. oil output increase can go away.”

“There’s real wealth flowing from the ground to everyday investors.”

And yet skeptics remain. “Some folks are hesitant to believe America’s energy comeback,” says Matt. “They think America’s oil boom is a flash in the pan. But these naysayers are going to miss an enormous opportunity right here in our own backyard.”

So at the risk of repeating ourselves, Matt would like to remind you of the following…

1. “In 2015,” he says, “the U.S. is set to be the world’s leading crude oil producer, surpassing Russia and Saudi Arabia. No. 1… in the world.” This is a prediction Byron King made in his ‘Remade in America’ presentation… and it’s coming true sooner than we could have imagined!

2. “By 2019, according to the Energy Information Administration, the U.S. will surpass its 1970s crude oil production peak. We’re going to be producing more oil than EVER here in the U.S.”

“Next time you fill up your gas tank at the local station,” Matt adds, “don’t think about Saudi Arabia, Nigeria or Russia. Instead, think about Texas, North Dakota, Oklahoma, Louisiana and even Colorado!”

That’s right. The Bakken in North Dakota and the Eagle Ford in Texas get all the headlines when it comes to shale oil. But as Matt has been keen to remind us in recent weeks, the Niobrara Shale in Colorado is shaping up as the “Baby Bakken.” 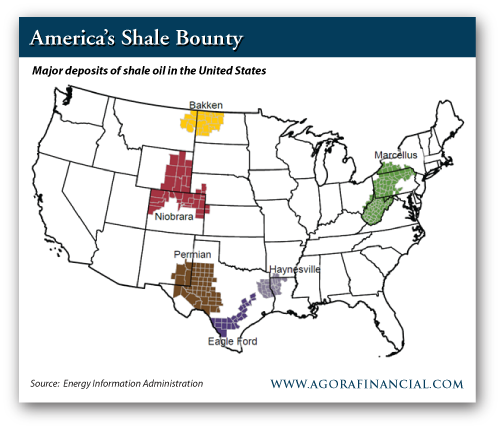 Within the Niobrara, Matt is eyeing a field east of Denver called the Wattenberg. “Within the next few years, we could see an increase in crude production similar to what we saw in North Dakota. By some estimates, Colorado could soon be the third-largest oil-producing state in the U.S.

“To say that little-known companies are going to profit from this is an understatement,” Matt goes on. “Expect to see more fast-moving shale opportunities coming very soon.”

Indeed, Matt says the next one rolls around only two days from now. And so he’s extending an invitation. Matt, take it away…

“As I count down, I’m looking for only 100 more readers of The 5 who think they can stick it out as modern-day ‘wildcatters.’ The stake is a double your money in 36 days.

“The response I’ve gotten is huge. So if you think you have what it takes to be one these 100 wildcatters and can click faster than the other 175,000 readers of The 5 who are vying for the spot, click here now.

“If we’ve found the 100 wildcatters we’re looking for today by the time you’ve visited our site to volunteer yourself, I apologize.”

The major U.S. stock indexes are adrift as a summer weekend fast approaches. The Dow and the S&P are slightly in the red, the Nasdaq and the Russell 2000 slightly in the green.

Bonds rallied and stocks tanked yesterday when St. Louis Fed chief James Bullard — ordinarily perceived as “hawkish” — suggested the Fed might start raising interest rates as early as the first quarter of next year. “Markets don’t appreciate how close the Fed is to its goals,” is how he put it.

Man, talk about setting a low bar. But we digress…

As it happens, “the currencies didn’t panic when Bullard threw his cat among the pigeons yesterday,” reports Chuck Butler from his post at EverBank World Markets in St. Louis. “Come Monday, it will be month-end, and quarter-end, so the position squaring ahead of quarter-end is beginning to take shape, and in those trades are the closing of dollar long positions that are getting old and stale. We could see the currencies pop up today and Monday.”

Did the other shoe just drop in the gas trade between Russia and China?

Last month, presidents Putin and Xi signed a $400 billion 30-year deal to sell Russian gas to China. Left up in the air is what currency would be used to carry out the transaction: Would they bypass the “world’s reserve currency” of the dollar and trade in their own currencies?

Russia’s energy minister had said gas payments would indeed be made in dollars.

But now the finance chief at the Russian state-owned gas giant Gazprom has weighed in: “There are no risks for Gazprom, except for minor transaction expenses,” said Andrei Kruglov. “In regard to using the yuan or rubles in accounting, we are basically ready for that, we think that this is completely normal.”

Hookers and blow can boost your economic output, Dutch edition: We’ve noted in recent weeks how economic statisticians in both Italy and the U.K. plan to add prostitution and drugs to their GDP statistics.

Turns out the Dutch have already done so. The wonks there conclude that the nation’s famous red-light districts and “coffee shops” add 2.5 billion euros to the economy. 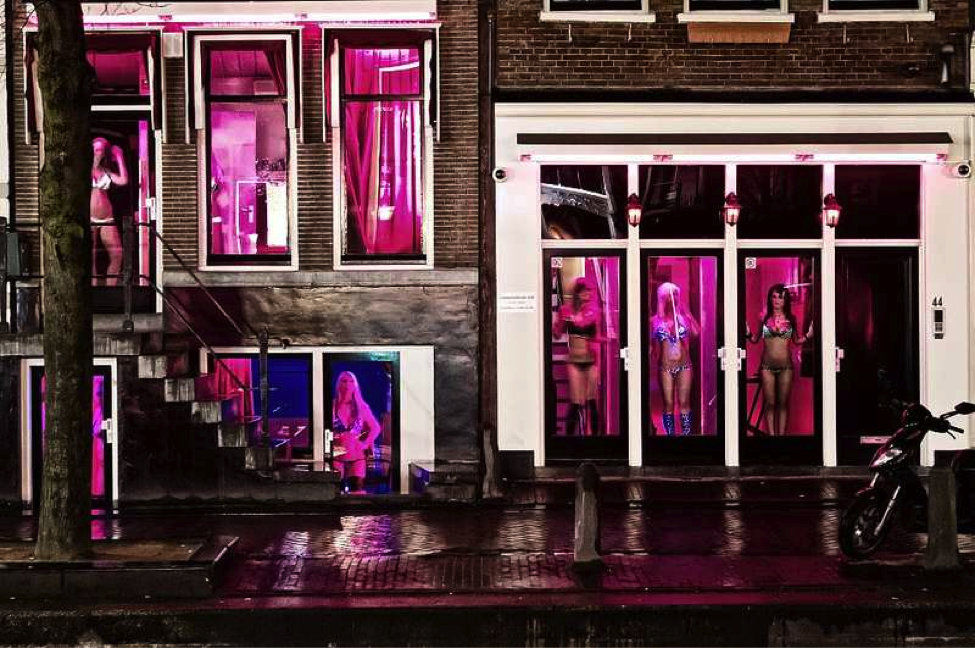 With this move, the Dutch are getting in line with new standards for economic statistics laid down by the European Union.

Curiously, the French do not plan to comply. “France will not be adding either the illegal drugs trade or illegal prostitution to its calculations of gross domestic output,” Reuters reports, “because such transactions are not always based on mutual consent, its national statistics office said last week.”

“I continue to be amazed,” a reader chimes in on the subject of economic statistics, “that the money printers at the Federal Reserve have blinders on to basic consumption items like food.

“While a Samsung LED television I wanted to buy at Christmas dropped from $3,500 to $2,500, I have not bought that television or have to, today or ever. On the other hand, when I was at a major grocery chain the other day and I saw a rib-eye steak for $20, it made me realize how ridiculous beef prices are today.

“I consume energy and food every day!”

The 5: And when you switch from steak to hamburger, the statisticians have the gall to say your cost of living didn’t go up because you’re paying the same for beef as you did before. “Substitution” is the official term…

“Does anyone think it’s unusual to find a defecant (urban dictionary) in the hallway of an EPA office,” a reader writes after yesterday’s episode, “or how about an orifice it might have come from? Perhaps the people in this office are just protecting their own environment (marking their territory) the same way a rhinoceros does.

“This is an interesting entry in The 5, as most of them are, but I find nothing unusual here.”

“Wow, Dave, Mr. Holmes’ item was a good read, like most of your material in The 5,” writes one of our regulars after seeing Frank Holmes featured yesterday.

“Always enjoy anything having to do with the Midas metal, but (the inevitable but) I was just rejoicing the fact that the summer solstice occurred, the Earth starting to tilt the correct direction, and we are all still here to talk about it. Then the next thing I know, Mr. Holmes’ article talked about the ‘Love Trade’ and then the start of Ramadan, the Indian celebration of lights, wedding celebrations and, wow, it was Christmas already.

“Please, Dave, I’m at an age when I don’t need the years going by too fast. They tend to do that on their own, without any additional help.”

The 5: Gosh, and we didn’t even get into Chinese New Year…

“I usually love The 5, and your commentary is almost always spot on,” writes our final correspondent. “Your insight almost always without fail informs me and sometimes makes me laugh while doing so.

“There will be no buts, howevers or other contraindications to the first two statements. Have a fun weekend waiting for the other shoe to drop!”

P.S. Final reminder: Our search for “Wildcatters” concludes this Sunday. If you want a chance to double your money in 36 days playing America’s energy boom — and we remind you, some of your fellow readers have already done so this year — then now’s the time to act.